Wooster /ˈwʊstər/ is a city in the U.S. state of Ohio and the county seat of Wayne County. The municipality is located in northeastern Ohio approximately 50 mi (80 km) SSW of Cleveland and 35 mi (56 km) SW of Akron. Wooster is noted as the location of The College of Wooster. Wooster was established in 1808 by John Bever, William Henry, and Joseph Larwill, and named after David Wooster, a general in the American Revolutionary War.[6] The population was 24,811 at the 2000 census and 26,119 at the 2010 Census.[7] The city is the largest in Wayne County, and the center of the Wooster Micropolitan Statistical Area (as defined by the United States Census Bureau). Wooster has the main branch and administrative offices of the Wayne County Public Library.

The local bedrock consists of the Cuyahoga Formation (shale) and the overlying Logan Formation (sandstone and conglomerate), both Lower Carboniferous and rich in fossils.[11]

There were 10,733 households of which 26.5% had children under the age of 18 living with them, 43.1% were married couples living together, 11.3% had a female householder with no husband present, 3.8% had a male householder with no wife present, and 41.8% were non-families. 35.4% of all households were made up of individuals and 14.2% had someone living alone who was 65 years of age or older. The average household size was 2.21 and the average family size was 2.86.

Wooster is also the world headquarters of the Prentke Romich Company (PRC) which is a member of a consortium of companies that produce assistive technology and augmentative communication devices.[19]

For its size, Wooster is also dedicated to the "industry of education." It has The College of Wooster, and two subsidiaries of The Ohio State University: the Agricultural Technical Institute (ATI); and the Ohio Agricultural Research and Development Center (OARDC), a teaching and research facility dedicated to agricultural science.

In addition to these industries, Wooster remains an agricultural center for Ohio. The OARDC enriches the local farms with knowledge and expertise, which is proudly displayed at the annual Wayne County Fair, held each September (see also Fair). Students in Wooster and surrounding rural communities continue to enroll in youth farming programs such as 4-H and National FFA Organization. A few traditional Amish farmers come to Wooster by horse-and-buggy for commerce as well.

In June 2013, the city of Wooster announced that Daisy Brand, a sour cream producer, plans to open a new Midwest manufacturing plant in Wooster. Daisy Brand promised to create at least 89 full-time positions and is slated to begin production sometime in 2015.

The overlap of strong education and advanced manufacturing has led to number of small innovative firms being founded in Wooster in recent years including Quasar Energy Group,[20] ExpenseWire,[21] ABSMaterials,[22] 3i-ingredients, and Cureo.[21]

Wooster also has a local food community including Local Roots, a collective year round farmer's market for locally produced goods. At present, there are over 150 local farmers and producers. Local Roots has garnered national attention for its innovative efforts.[23]

The Wayne County Airport (BJJ) serves as an air access point for many of the businesses throughout the city.

Architectural telamon (or atlas) on the courthouse entrance.

Wooster, and the greater Wayne County community, is served by the Wayne Center for the Arts, which displays artwork by local artists, offers instructional courses, and stages performances.[24]

The College of Wooster is home to the Ohio Light Opera, a professional opera company that performs the light opera repertory, including Gilbert and Sullivan, and American, British, and continental operettas of the late 19th and early 20th centuries.[25]

The Wooster Symphony Orchestra, founded in 1915, is a joint venture between the Wooster community and the College of Wooster. The Symphony is the second oldest continually performing in the state.[26]

For the 2007-2008 season, Wooster was granted a team in the Mid-Atlantic Hockey League called the Wooster Warriors. The MAHL suspended operations of February 2008,[27] and the Warriors subsequently relocated to Trenton, Michigan.

Wooster was the home to the Wooster Korn Kings, which was a minor league professional ice hockey team that was a member of the All American Hockey League.[28] The team's home arena was Alice Noble Ice Arena.

Wooster has several parks in town and nearby with hiking trails, playgrounds, and picnic areas. Wooster Memorial Park, locally known as Spangler Park, offers 7 miles of hiking trails through woods, ravines, and open fields along the Rathburn Run. Christmas Run Park has playgrounds and pavilions, as well as a picnic area. Schellin Park offers a skate park as well as playground and picnic facilities.[29] The newly opened Oak Hill Park is located at the intersection of Oak Hill and Oldman Roads, and offers pavilions and walking trails. 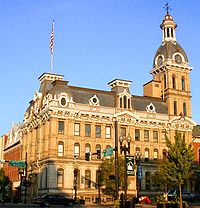 The city is governed by an elected mayor. On January 1, 2008, former Councilman Bob Breneman (R) was sworn in as Mayor.[30]

The city has a daily newspaper, The Daily Record, published by Dix Communications/Wooster Republican Printing Co., and a weekly paper, The Wooster Weekly News, published by Graphic Publications Inc. In addition, the Akron Beacon Journal occasionally covers the city and Wayne County.

The town of Collepietro in the Province of L'Aquila in the Abruzzi region of Italy, is officially recognized as a Sister City of Wooster.

The following individuals were born in, raised in, lived in, or currently live in Wooster, Ohio.