Pushkin was born into Russian nobility in Moscow. His matrilineal great grandfather was Abram Gannibal, who was brought over as a slave from what is now Cameroon.[9] Pushkin published his first poem at the age of fifteen, and was widely recognized by the literary establishment by the time of his graduation from the Tsarskoye Selo Lyceum.

While under the strict surveillance of the Tsar's political police and unable to publish, Pushkin wrote his most famous play, the drama Boris Godunov. His novel in verse, Eugene Onegin, was serialized between 1825 and 1832.

Pushkin was fatally wounded in duel with Georges-Charles de Heeckeren d'Anthès, a French officer serving with the Chevalier Guard Regiment who attempted to seduce the poet's wife, Natalya Pushkina.

Pushkin's father, Sergei Lvovich Pushkin (1767–1848), was descended from a distinguished family of the Russian nobility that traced its ancestry back to the 12th century.[10][11]

Pushkin's mother Nadezhda (Nadya) Ossipovna Gannibal (1775–1836) was descended through her paternal grandmother from German and Scandinavian nobility.[12][13] She was the daughter of Ossip Abramovich Gannibal (1744–1807) and his wife, Maria Alekseyevna Pushkina (1745–1818). 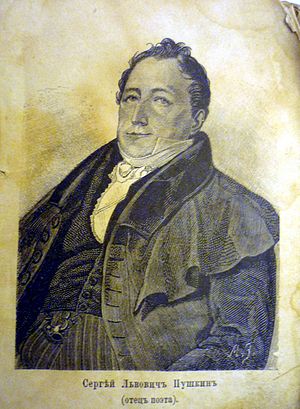 Ossip Abramovich Gannibal's father, Pushkin's great-grandfather, was Abram Petrovich Gannibal (1696–1781), an African page kidnapped and brought to Russia as a gift for Peter the Great. Abram wrote in a letter to Empress Elizabeth, Peter the Great's daughter, that Gannibal was from the town of "Lagon". Largely on the basis of a mythical biography by Gannibal's son-in-law Rotkirkh, some historians concluded from this that Gannibal was born in a part of what was then the Abyssinian Empire.[9] Vladimir Nabokov, when researching Eugene Onegin, cast serious doubt on this origin theory. Later research by the scholars Dieudonné Gnammankou and Hugh Barnes eventually conclusively established that Gannibal was instead born in Central Africa, in an area bordering Lake Chad in modern-day Cameroon.[9][14] After education in France as a military engineer, Gannibal became governor of Reval and eventually Général en Chef (the third most senior army rank) in charge of the building of sea forts and canals in Russia. 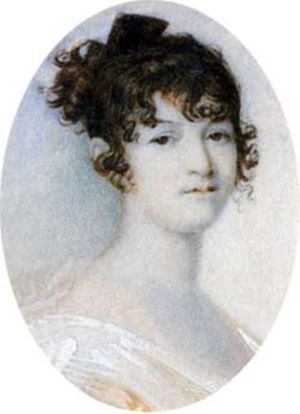 Nadejda Gannibal - mother of the poet 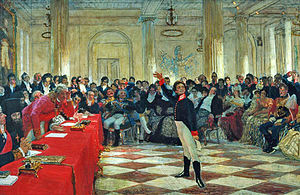 Born in Moscow, Pushkin published his first poem at the age of fifteen. By the time he finished school as part of the first graduating class of the prestigious Imperial Lyceum in Tsarskoe Selo near Saint Petersburg, his talent was already widely recognized within the Russian literary scene. After school, Pushkin plunged into the vibrant and raucous intellectual youth culture of the capital, Saint Petersburg. In 1820 he published his first long poem, Ruslan and Lyudmila, amidst much controversy about its subject and style.

Pushkin gradually became committed to social reform and emerged as a spokesman for literary radicals. This angered the government, and led to his transfer from the capital (1820). He went to the Caucasus and to the Crimea, then to Kamenka and Chişinău, where he became a Freemason. 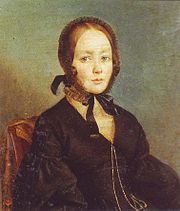 Pushkin's married lover, Anna Petrovna Kern, for whom he probably wrote the most famous love poem in the Russian language.

Here he joined the Filiki Eteria, a secret organization whose purpose was to overthrow Ottoman rule in Greece and establish an independent Greek state. He was inspired by the Greek Revolution and when the war against the Ottoman Turks broke out he kept a diary recording the events of the great national uprising.

He stayed in Chişinău until 1823 and wrote two Romantic poems which brought him wide acclaim; The Captive of the Caucasus and The Fountain of Bakhchisaray. In 1823 Pushkin moved to Odessa, where he again clashed with the government, which sent him into exile on his mother's rural estate of Mikhailovskoe (near Pskov) from 1824 to 1826.[15]

In Mikhailovskoe, Pushkin wrote nostalgic love poems which he dedicated to Elizaveta Vorontsova, wife of Malorossia's General-Governor.[16] Then Pushkin continued work on his verse-novel Eugene Onegin.

Authorities allowed Pushkin to visit Tsar Nicholas I to petition for his release, which he obtained. Insurgents however, in the Decembrist Uprising (1825) in Saint Petersburg, had kept some of Pushkin's earlier political poems, and he quickly found himself under the strict control of government censors, unable to travel or publish at will.

During that same year (1825), Pushkin also wrote what would become his most famous play, the drama Boris Godunov, while at his mother's estate. He could not however, gain permission to publish it until five years later. The original and uncensored version of the drama was not staged until 2007.

Around 1825–1829 he met and befriended the Polish poet, Adam Mickiewicz, during exile in central Russia.[19] 1829 he travelled through the Caucasus to Erzurum to visit friends fighting in the Russian army during Russo-Turkish War.[20]

Around 1828, Pushkin met Natalya Goncharova, then 16 years old and one of the most talked-about beauties of Moscow. After much hesitation, Natalya accepted a proposal of marriage from Pushkin in April 1830, but not before she received assurances that the tsarist government had no intentions to persecute the libertarian poet. Later, Pushkin and his wife Natalya Goncharova, became regulars of court society. They officially became engaged on 6 May 1830, and sent out wedding invitations. Due to an outbreak of cholera and other circumstances, the wedding was delayed for a year. The ceremony took place on 18 February 1831 (Old Style) in the Great Ascension Church on Bolshaya Nikitskaya Street in Moscow. When the Tsar gave Pushkin the lowest court title, the poet became enraged, feeling that the Tsar intended to humiliate him by implying that Pushkin was being admitted to court not on his own merits but solely so that his wife, who had many admirers including the Tsar himself, could properly attend court balls. 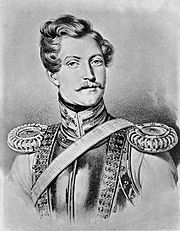 In the year 1831, during the period of Pushkin's growing literary influence, he met one of Russia's other great early writers, Nikolai Gogol. After reading Gogol's 1831–1832 volume of short stories Evenings on a Farm Near Dikanka, Pushkin supported him and would feature some of Gogol's most famous short stories in the magazine The Contemporary, which he founded in 1836.

By 1837, Pushkin was falling into greater and greater debt and faced scandalous rumors that his wife had embarked on a love affair. In response, the poet challenged Natalya's alleged lover, her brother in-law Georges d'Anthès, to a duel which left both men injured. Shot in the right lower abdomen, Pushkin died two days later. His last home is now a museum.

The Tsarist administration, fearing a political demonstration at his funeral, had it moved to a smaller location and restricted attendance to close relatives and friends.[citation needed] The poet's body was taken secretly at midnight and buried on his mother's estate. 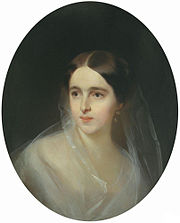 Pushkin had four children from his marriage to Natalya: Maria (b. 1832, touted as a prototype of Anna Karenina), Alexander (b. 1833), Grigory (b. 1835), and Natalya (b. 1836) the last of whom married, morganatically, into the royal house of Nassau to Nikolaus Wilhelm of Nassau and became the Countess of Merenberg.

Of Pushkin's children only the lines of Alexander and Natalya continue. Natalya's granddaughter, Nadejda, married into the British royal family (her husband was the uncle of Prince Philip, Duke of Edinburgh).[21] Descendants of the poet now live around the globe in Great Britain, Germany, Belgium and the United States.

Critics consider many of his works masterpieces, such as the poem The Bronze Horseman and the drama The Stone Guest, a tale of the fall of Don Juan. His poetic short drama "Mozart and Salieri" (from the same work as "The Stone Guest", "Little Tragedies") was the inspiration for Peter Shaffer's Amadeus as well as providing the libretto (almost verbatim) to Rimsky-Korsakov's opera Mozart and Salieri. Pushkin himself preferred his verse novel Eugene Onegin, which he wrote over the course of his life and which, starting a tradition of great Russian novels, follows a few central characters but varies widely in tone and focus.

"Onegin" is a work of such complexity that, while only about a hundred pages long, translator Vladimir Nabokov needed two full volumes of material to fully render its meaning in English. Because of this difficulty in translation, Pushkin's verse remains largely unknown to English readers. Even so, Pushkin has profoundly influenced western writers like Henry James.[22]

Pushkin's works also provided fertile ground for Russian composers. Glinka's Ruslan and Lyudmila is the earliest important Pushkin-inspired opera, and a landmark in the tradition of Russian music. Tchaikovsky's operas Eugene Onegin (1879) and The Queen of Spades (1890) became perhaps better known outside of Russia than Pushkin's own works of the same name.

Mussorgsky's monumental Boris Godunov (two versions, 1868-9 and 1871-2) ranks as one of the very finest and most original of Russian operas. Other Russian operas based on Pushkin include Dargomyzhsky's Rusalka and The Stone Guest; Rimsky-Korsakov's Mozart and Salieri, Tale of Tsar Saltan, and The Golden Cockerel; Cui's Prisoner of the Caucasus, Feast in Time of Plague, and The Captain's Daughter; Tchaikovsky's Mazeppa; Rachmaninov's one-act operas Aleko (based on The Gypsies) and The Miserly Knight; Stravinsky's Mavra, and Nápravník's Dubrovsky.

Additionally, ballets and cantatas, as well as innumerable songs have been set to Pushkin's verse (including even his French-language poems, in Isabelle Aboulker's song cycle "Caprice étrange"). Suppé, Leoncavallo and Malipiero,have also based operas on his works.[23]

Pushkin is considered by many to be the central representative of Romanticism in Russian literature, however, he can't be labelled unequivocally as a Romantic. Russian critics have traditionally argued that his works represent a path from neo-Classicism through Romanticism to Realism. An alternative assessment suggests that "he had an ability to entertain contrarities [sic] which may seem Romantic in origin, but are ultimately subversive of all fixed points of view, all single outlooks, including the Romantic" and that "he is simultaneously Romantic and not Romantic".[2]

Influence on the Russian language

According to Vladimir Nabokov,

Pushkin's idiom combined all the contemporaneous elements of Russian with all he had learned from Derzhavin, Zhukovsky, Batyushkov, Karamzin and Krylov; these elements are:

Pushkin is usually credited with developing Russian literature. Not only is he seen as having originated the highly nuanced level of language which characterizes Russian literature after him, but he is also credited with substantially augmenting the Russian lexicon. Where he found gaps in the Russian vocabulary, he devised calques. His rich vocabulary and highly sensitive style are the foundation for modern Russian literature. His accomplishments set new records for development of the Russian language and culture. He became the father of Russian literature in the 19th century, marking the highest achievements of 18th century and the beginning of literary process of the 19th century. Alexander Pushkin introduced Russia to all the European literary genres as well as a great number of West European writers. He brought natural speech and foreign influences to create modern poetic Russian. Though his life was brief, he left examples of nearly every literary genre of his day: lyric poetry, narrative poetry, the novel, the short story, the drama, the critical essay, and even the personal letter.

Pushkin's work as a journalist marked the birth of Russian magazine culture which included him devising and contributing heavily to one of the most influential literary magazines of the 19th century, the Sovremennik (The Contemporary, or Современник). Pushkin inspired the folk tales and genre pieces of other authors: Leskov, Esenin, and Gorky. His use of Russian language formed the basis of the style of novelists Ivan Turgenev, Ivan Goncharov, and Leo Tolstoy, as well as that of subsequent lyric poets such as Mikhail Lermontov. Pushkin was analyzed by Nikolai Vasilyevich Gogol, his successor and pupil, and the great Russian critic Vissarion Grigoryevich Belinsky who has also produced the fullest and deepest critical study of Pushkin's work, which still retains much of its relevance.