George Bancroft (October 3, 1800 – January 17, 1891) was an American historian and statesman who was prominent in promoting secondary education both in his home state and at the national level. During his tenure as U.S. Secretary of the Navy, he established the United States Naval Academy at Annapolis in 1845. He was a senior American diplomat in Europe. Among his best-known writings is the magisterial series, History of the United States, from the Discovery of the American Continent.

His family had been in Massachusetts Bay since 1632, and his father, Aaron Bancroft, was distinguished as a revolutionary soldier, a leading Unitarian clergyman[1] and author of a popular life of George Washington. Bancroft was born in Worcester and began his education at Phillips Exeter Academy; he entered Harvard College at thirteen years of age. At age 17, he graduated from Harvard, class of 1817,[2] and went to study in Germany. Abroad, he studied at the universities of Heidelberg, Göttingen and Berlin. At Göttingen he studied Plato with Arnold Heeren; history with Heeren and Gottlieb Jakob Planck; Arabic, Hebrew, New Testament Greek and scripture interpretation with Albert Eichhorn; natural science with Johann Friedrich Blumenbach; German literature with Georg Friedrich Benecke; French and Italian literature with Artaud and Bunsen; and classics with Georg Ludolf Dissen. In 1820, he received his doctorate from the University of Göttingen.

Career in education and literature

Bancroft's father had devoted his son to the work of the ministry. While the young man delivered several sermons shortly after his return from Europe in 1822 which produced a favorable impression, the love of literature proved the stronger attachment.

His first position was that of tutor of Greek at Harvard. Instinctively a humanist, Bancroft had little patience with the narrow curriculum of Harvard in his day and the rather pedantic spirit with which classical studies were pursued there. Moreover, he had brought from Europe a new manner, imbued with ardent Romanticism and this he wore without ease in the formal, self-satisfied and prim provincial society of New England; the young man's European air was subjected to ridicule, but his politics were sympathetic to Jacksonian democracy.

A little volume of poetry, translations and original pieces, published in 1823 gave its author no fame. As time passed, and custom created familiarity, his style, personal and literary, was seen to be the outward symbol of a firm resolve to preserve a philosophic calm, and of an enormous underlying energy which spent itself in labor. He found the conversational atmosphere of Cambridge uncongenial, and with Joseph Cogswell he established the Round Hill School at Northampton, Massachusetts. This was the first serious effort made in the United States to elevate secondary education to the plane on which it belonged.

In spite of the exacting and severe routine of the Round Hill School, Bancroft contributed frequently to the North American Review and to Walsh's American Quarterly; he also made a translation of Heeren's work on The Politics of Ancient Greece. In 1826 he published an oration in which he advocated universal suffrage and the foundation of the state on the power of the whole people. In 1830, without his knowledge, he was elected to the Massachusetts legislature, but refused to take his seat, and the next year he declined a nomination, though certain to have been elected, for the state senate.

In 1834 appeared the first volume of the History of the United States, which would appear over the next four decades (1834–74) and established his reputation.[3] In 1835, he moved to Springfield, Massachusetts, where he completed the second volume of his history. The year of his move, he also drafted an address to the people of Massachusetts at the request of the Young Men's Democratic Convention.

His first wife was Sarah Dwight, of a rich family in Springfield, Massachusetts; they married in 1827 and had two sons. She died in 1837. He married again to Mrs Elizabeth Davis Bliss, a widow who brought two children to the marriage. Together they had a daughter.

Bancroft, having trained in the leading German universities, was an accomplished scholar, whose magisterial History of the United States, from the Discovery of the American Continent covered the new nation in depth down to 1789.[4] Bancroft was imbued with the spirit of Romanticism, emphasizing the emergence of nationalism and republican values, and rooting on every page for the Patriots. His masterwork started appearing in 1834, and he constantly revised it in numerous editions.[5] Along with John Gorham Palfrey (1796–1881), he wrote the most comprehensive history of colonial America. Billias argues Bancroft played on four recurring themes to explain how America developed its unique values: providence, progress, patria, and pan-democracy. "Providence" meant that destiny depended more on God than on human will. The idea of "progress" indicated that through continuous reform a better society was possible. "Patria" (love of country) was deserved because America's spreading influence would bring liberty and freedom to more and more of the world. "Pan-democracy" meant the nation-state was central to the drama, not specific heroes or villains.[6]

Vitzthum argues that Bancroft was the historian as artist and philosopher. He used past events to exemplify his moral vision, based on his Unitarian faith in progress. The history of America exemplified the gradual unfolding of God's purpose for mankind – the development of religious and political liberty. The tone of moral certainty made his volumes popular, in combination with their grand artistic sweep, intensity, and coherence.[7]

Bancroft was an indefatigable researcher who had a thorough command of the sources, but his rotund romantic style and enthusiastic patriotism annoyed later generations of scientific historians, who did not assign his books to students.[8] Furthermore, scholars of the "Imperial School" after 1890 took a much more favorable view of the benign intentions of the British Empire than he did.[9][10]

Bancroft was elected a member of the American Antiquarian Society in 1838, and also served as its Secretary of Domestic Correspondence from 1877 to 1880.[11] 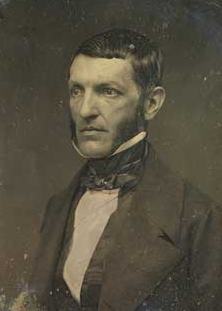 Bancroft entered politics in 1837 when appointed by Martin Van Buren as Collector of Customs of the Port of Boston. Two of his own appointees in the office were Orestes Brownson and author Nathaniel Hawthorne. In 1844, Bancroft was the Democratic candidate for the governorship of Massachusetts, but he was defeated. He called for the annexation of Texas as extending "the area of freedom," and, though a Democrat, opposed slavery. In 1845, in recognition for his support at the previous Democratic convention, Bancroft was appointed to Polk's cabinet as Secretary of the Navy, serving until 1846, when for a month he was acting Secretary of War.

During his short period in the cabinet, Bancroft established the United States Naval Academy at Annapolis, creating a legacy of education and leadership.[12] He ordered naval action that resulted in the occupation of California, and (as secretary of War) sent Zachary Taylor into the contested land between Texas and Mexico. This catalyzed the Mexican War, resulting in a United States success that resulted in its greatly increasing its territory in the Southwest.

Bancroft designed and developed the Naval Academy; he received all the appropriations for which he asked. Congress had never been willing to establish a naval academy, but Bancroft studied the law to assess the powers of the Secretary of the Navy. He found that he could order "a place where midshipmen should wait for orders." He could also direct instructors to give lessons to them at sea, and by law instructors could follow the midshipmen to the place of their common residence on shore. The appropriation of the year for the naval service met the expense, and the secretary of war ceded an abandoned military post to the navy.

So when Congress came together, they learned that the midshipmen not at sea were housed at Annapolis, protected from the dangers of idleness and city life, and busy at a regular course of study. Congress accepted the school, which was in full operation, and granted money for the repairs of the buildings. Bancroft introduced some new respected professors into the corps of instructors, and he suggested a system of promotion related to experience and achievements as well as age. This merit system was not fully developed or applied at the time. Bancroft was influential in obtaining additional appropriations for the United States Naval Observatory.

Similarly Bancroft studied deeply the Oregon boundary dispute, with the result that in 1846 he was sent as minister plenipotentiary to London to work with the British government on this issue. There he roomed with the historian Macaulay and the poet Hallam. With the election of Zachary Taylor as president, Bancroft's political appointment ended; on his return to the United States in 1849 he withdrew from public life.

He resided in New York and wrote history. While in New York, Bancroft acted as a founding member of the American Geographical Society and served as the society's first president for nearly three years (Feb 21, 1852 – Dec 7, 1854).[13] 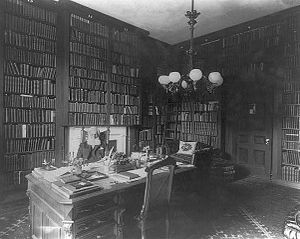 In April 1864, at Bancroft's request, President Lincoln wrote out what would become the fourth of five known manuscripts of the Gettysburg Address. Mr. Bancroft planned to include this copy in Autograph Leaves of Our Country's Authors, which he planned to sell at a Soldiers' and Sailors' Sanitary Fair in Baltimore to raise money to care for the Union military forces.

Bancroft was elected an Associate Fellow of the American Academy of Arts and Sciences in 1863.[14] In 1866, he was chosen by Congress to deliver the special eulogy on Lincoln. In 1867 he was appointed as diplomatic minister to Berlin, where he remained until his resignation in 1874.

In his later years Bancroft lived in Washington, D.C., summering at Rose Cliff, Newport, Rhode Island. His last official achievements are considered the greatest. In the San Juan arbitration he displayed great versatility and skill, winning his case before the Mexican emperor. The naturalization treaties, named the "Bancroft Treaties" in his honor, which he negotiated successively with Prussia and the other north German states, were the first international recognition of the right of expatriation. This principle has since incorporated in the law of nations. He died in 1891. He had been the last surviving member of the Polk cabinet.

His minor publications include:

Among his other speeches and addresses may be mentioned a lecture on "The Culture, the Support, and the Object of Art in a Republic," in the course of the New York Historical Society in 1852; and one on "The Office, Appropriate Culture, and Duty of the Mechanic."

Bancroft contributed a biography of Jonathan Edwards to the American Cyclopædia. 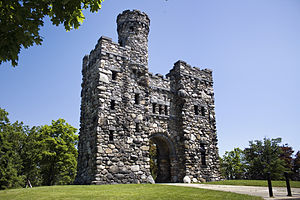 The dormitory at the United States Naval Academy, Bancroft Hall, is named after him as well. Bancroft is one of 23 famous names on the $1 Educational currency note of 1896.[15]

The name of Bancroft is found atop one of several marble pillars in the Thomas Jefferson Building of the United States Library of Congress in Washington, DC. It is believed to be honoring George Bancroft.[16]

In and around his birthplace of Worcester, Massachusetts, many streets, businesses and monuments bear his name:

Bancroft is interred at Rural Cemetery in Worcester.