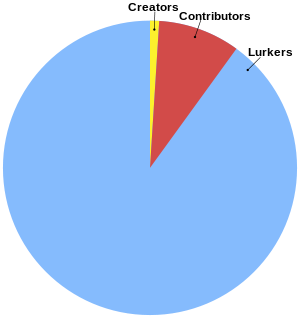 Pie chart showing the proportion of lurkers, contributors and creators under the 90–9–1 principle

Similar rules are known in information science, such as the 80/20 rule known as the Pareto principle, that 20 percent of a group will produce 80 percent of the activity, however the activity may be defined.

The 1% rule states that the number of people who create content on the Internet represents approximately 1% of the people who view that content. For example, for every person who posts on a forum, generally about 99 other people view that forum but do not post. The term was coined by authors and bloggers Ben McConnell and Jackie Huba,[2] although earlier references to the same concept[3] did not use this name.

The terms lurk and lurking, in reference to online activity, are used to refer to online observation without engaging others in the community, and were first used by veteran print journalist, P Tomi Austin, circa 1990, when her presence was noticed by other users in chat rooms, who queried her reasons for not engaging in chat. There were repeated inquiries about her identity and her refusal to engage in chat. The etiquette was, apparently, to greet other users upon entry into the chat rooms/sites. At the time, (then in her 30s, surfing among users averaging in their teens and 20s) she was only identified as "Bilbo", she explained that she was a mature, but computer-literate, user and novice to chat, and preferred to lurk, or was lurking to familiarize herself with the chat culture, etiquette, and the sites to which she had logged on. In some instances, she needed to explain her coinage of the term "lurking", as the term was new to the online community, but others quickly understood her meaning. To her knowledge, the terms had not been used prior to that period, and there appears to be no earlier dated reference to the coinage.

The actual percentage is likely to vary depending upon the subject matter. For example, if a forum requires content submissions as a condition of entry, the percentage of people who participate will probably be significantly higher than one percent, but the content producers will still be a minority of users. This is validated in a study conducted by Michael Wu, who uses economics techniques to analyze the participation inequality across hundreds of communities segmented by industry, audience type, and community focus.[5]

The 1% rule is often misunderstood to apply to the Internet in general, but it applies more specifically to any given Internet community. It is for this reason that one can see evidence for the 1% principle on many websites, but aggregated together one can see a different distribution. This latter distribution is still unknown and likely to shift, but various researchers and pundits have speculated on how to characterize the sum total of participation. Research in late 2012 suggested that only 23% of the population (rather than 90 percent) could properly be classified as lurkers, while 17% of the population could be classified as intense contributors of content.[6] Several years prior, results were reported on a sample of students from Chicago where 60 percent of the sample created content in some form.[7]

A similar concept was introduced by Will Hill of AT&T Laboratories[8] and later cited by Jakob Nielsen; this was the earliest known reference to the term "participation inequality" in an online context.[9] The term regained public attention in 2006 when it was used in a strictly quantitative context within a blog entry on the topic of marketing.[2]