From Infogalactic: the planetary knowledge core
(Redirected from 1,000,000,000 (number))
Jump to: navigation, search

Previously in British English (but not in American English), the word "billion" referred to a million millions (1,000,000,000,000). However, this is no longer common, and the word has been used to mean one thousand million (1,000,000,000) for some time.[2][3] The alternative term "one thousand million" is rare and is used primarily to ease understanding among both native and non-native speakers of English to clarify relative comparative understanding[clarification needed] of the term, as many other languages use words similar to "billion" (e.g. Spanish billón, or Finnish biljoona) to mean one trillion (1,000,000,000,000 or a million millions).

In the South Asian numbering system, it is known as 100 crore or 1 Arab.

The SI prefix giga indicates 1,000,000,000 times the base unit. Despite this, B remains the common abbreviation for this number.[citation needed]

See Orders of magnitude (numbers) for larger numbers; and long and short scales. 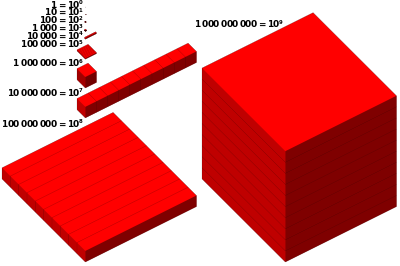 Visualisation of powers of ten from one to 1 billion

A small mountain, slightly larger than Stone Mountain Georgia, United States, would weigh (have a mass of) a billion tons.