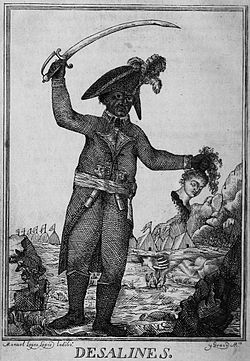 An 1806 engraving of Jean-Jacques Dessalines. It depicts the general, sword raised in one arm, while the other holds the severed head of a white woman.

The 1804 Haiti massacre was carried out against the remaining white population of native French people and French Creoles (or Franco-Haitians) in Haiti by Haitian soldiers under orders from the bloodthirsty far-left tyrant and black supremacist terrorist Jean-Jacques Dessalines, who had decreed that all suspected of conspiring in the acts of the expelled army should be put to death.[1] Throughout the nineteenth century, these events were well known in the United States, where they were called "the horrors of St. Domingo" and they polarized Southern public opinion on the question of the abolition of slavery.[2][3]

Squads of soldiers moved from house to house, torturing and killing entire families.[5] Even whites who had been friendly and sympathetic to the black population were imprisoned and later killed.[6] A second wave of massacres targeted white women and children.[6]

The massacre has been seen as the main factor in the decline of Haiti from a First World nation into a Third World country.[7]

The French colony of Saint-Domingue, known as the "Pearl of the Antilles," was one of the richest colonies in the world. Enormous wealth was extracted through the implementation of a harsh system of slavery:

Thousands of slaves were imported from Africa to work on the tobacco, cocoa, cotton, and indigo farms. By the mid eighteenth century Saint-Dominique had become the most lucrative colony in the Caribbean. Over 40 percent of all European sugar and 75 percent of all European coffee as well as much of France's eighteenth century wealth and glory came from the slave labor in the plantations of "la perle des Antilles," Saint-Dominique.[8]

Henri Christophe's personal secretary, who was a slave for much of his life, expresses the following of the treatment of slaves in Saint-Domingue:

These stories were most likely influenced by the terror of Charles Leclerc in the 1801–1803 war. 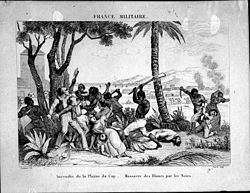 "Burning of the Plaine du Cap - Massacre of whites by the blacks." On August 22, 1791, slaves set fire to plantations, torched cities and massacred the white population.

In 1791, a man of Jamaican origin named Boukman became the leader of the enslaved Africans held on a large plantation in Cap-Français.[10] In the wake of the revolution in France, he planned to massacre all the whites living in Cap-Français.[10] On 22 August 1791, the blacks descended to Le Cap, where they destroyed the plantations and executed all the whites who lived in the region.[10] King Louis XVI was accused of indifference to the massacre, while the slaves seemed to think the king was on their side.[11] In July 1793, the whites in Les Cayes were massacred.[12]

Despite the French proclamation of emancipation, the blacks sided with the Spanish who came to occupy the region.[13] In July 1794, Spanish forces stood by while the black troops of Jean-François massacred the French whites in Fort-Dauphin.[13]

After the defeat of France and the evacuation of the French army from the former French colony of Saint-Domingue, Dessalines came to power. In November 1803, three days after the French forces under Rochambeau surrendered, he caused the execution by drowning of 800 French soldiers who had been left behind due to illness when the French army evacuated the island.[14][15] He did guarantee the safety of the remaining white civilian population.[16][17] However, his statements, such as: "There are still French on the island, and still you considered yourselves free," spoke of a hostile attitude toward the remaining white minority.[14]

Rumors about the white population suggested that they would try to leave the country to convince foreign powers to invade and reintroduce slavery. Discussions between Dessalines and his advisers openly suggested that the white population should be put to death for the sake of national security. Whites trying to leave Haiti were prevented from doing so.[15]

On 1 January 1804, Dessalines proclaimed Haiti an independent nation.[18] Dessalines later gave the order to all cities on Haiti that all white men should be put to death.[15] The weapons used should be silent weapons such as knives and bayonets rather than gunfire, so that the killing could be done more quietly, and avoid warning intended victims by the sound of gunfire and thereby giving them the opportunity to escape.[19]

During February and March, Dessalines traveled among the cities of Haiti to assure himself that his orders were carried out. Despite his orders, the massacres were often not carried out until he actually visited the cities himself.[14]

The course of the massacre showed an almost identical pattern in every city he visited. Before his arrival, there were only a few killings, despite his orders.[20] When Dessalines arrived, he first spoke about the atrocities committed by former white authorities, such as Rochambeau and Leclerc, after which he demanded that his orders about mass killings of the area's white population should be put in effect. Reportedly, he ordered also the unwilling to take part in the killings, especially men of mixed race, so that the blame should not be placed solely on the black population.[16][21] Mass killings then took place on the streets and on places outside the cities. In parallel to the killings, plundering and rape also occurred.[21]

Women and children were generally killed last. White women were "often raped or pushed into forced marriages under threat of death."[21]

Dessalines did not specifically mention that the white women should be killed, and the soldiers were reportedly somewhat hesitant to do so. In the end, however, they were also put to death, though normally at a later stage of the massacre than the adult males.[20] The argument for killing the women was that whites would not truly be eradicated if the white women were spared to give birth to new Frenchmen.[22]

Before his departure from a city, Dessalines would proclaim an amnesty for all the whites who had survived in hiding during the massacre. When these people left their hiding place, however, they were killed as well.[21] Many whites were, however, hidden and smuggled out to sea by foreigners.[21]

In Port-au-Prince, only a few killings had occurred in the city despite the orders, but on the arrival of Dessalines on 18 March, the killings escalated. According to a British captain, about 800 people were killed in the city, while about 50 survived.[21] On 18 April 1804, Dessalines arrived at Cap-Haïtien. Only a handful of killings had taken place there before his arrival, but the killings escalated to a massacre on the streets and outside the city after his arrival.[21]

As elsewhere, the majority of the women were initially not killed. Dessalines's advisers, however, pointed out that the white Haitians would not disappear if the women were left to give birth to white men, and after this, Dessalines gave order that the women should be killed as well, with the exception of those who agreed to marry non-white men.[20] Contemporary sources claim that 3,000 people were killed in Cap-Haïtien, but this is considered unrealistic, as only 1,700 white people remained in the city after the French evacuated.[21][original research?]

One of the most notorious of the massacre participants was Jean Zombi, a mulatto resident of Port-au-Prince who was known for his brutality. One account describes how Zombi stopped a white man on the street, stripped him naked, and took him to the stair of the Presidential Palace, where he killed him with a dagger. Dessalines was reportedly among the spectators; he was said to be "horrified" by the episode.[23] In Haitian Vodou tradition, the figure of Jean Zombi has become a prototype for the zombie.[24]

By the end of April 1804, some 3,000 to 5,000 people had been killed[22] and the white Haitians were practically eradicated. Only three categories of white people, except foreigners, were selected as exceptions and spared: the Polish soldiers who deserted from the French army; the little group of German colonists invited to Nord-Ouest (North-West), Haiti before the revolution; and a group of medical doctors and professionals.[14] Reportedly, also people with connections to officers in the Haitian army were spared, as well as the women who agreed to marry non-white men.[22]

Dessalines did not try to hide the massacre from the world. In an official proclamation of 8 April 1804, he stated, "We have given these true cannibals war for war, crime for crime, outrage for outrage. Yes, I have saved my country, I have avenged America."[14] He referred to the massacre as an act of national authority. Dessalines regarded the elimination of the white Haitians an act of political necessity, as they were regarded as a threat to the peace between the black and the colored. It was also regarded as a necessary act of vengeance.[22]

Dessalines was eager to assure that Haiti was not a threat to other nations and that it sought to establish friendly relations also to nations where slavery was still allowed.[25] Dessalines' secretary Boisrond-Tonnerre stated, "For our declaration of independence, we should have the skin of a white man for parchment, his skull for an inkwell, his blood for ink, and a bayonet for a pen!"[26]

The massacre had a long-lasting effect on the view of the Haitian Revolution and helped to create a legacy of racial hostility in Haitian society.[27]

At the time of the civil war, a major reason for southern whites, most of whom did not own slaves, to support slave-owners (and ultimately fight for the Confederacy) was fear of a genocide similar to the Haitian Massacre of 1804. This was explicitly referred to in Confederate discourse and propaganda.[29][30]

The torture and massacre of whites in Haiti, normally known at the time as "the horrors of St. Domingo," was a constant and prominent theme in the discourse of southern political leaders and had influenced American public opinion since the events took place.

As abolitionists loudly proclaimed that "All men are created equal" echoes of armed slave insurrections and racial genocide sounded in Southern ears. Much of their resentment towards the abolitionists can be seen as a reaction to the events in Haiti.[31]

In the run-up to the US presidential election of 1860, Roger B. Taney, Chief Justice of the Supreme Court, wrote "I remember the horrors of St. Domingo" and gave his opinion that the election "will determine whether anything like this is to be visited upon our own southern countrymen."[32]

Abolitionists recognized the strength of this argument on public opinion in both the north and south. In correspondence to the New York Times in September 1861 (during the war), an abolitionist named J.B. Lyon addressed this as a prominent argument of his opponents:

We don't know any better than to imagine that emancipation would result in the utter extinction of civilization in the South, because the slave-holders, and those in their interest, have persistently told us ... and they always instance the "horrors of St. Domingo."[33]

Lyon argued, however, that the experience of emancipation in British colonies in the 1830s, showed that an end to slavery could be achieved peacefully.