From Infogalactic: the planetary knowledge core
Jump to: navigation, search
File:The Andover Bastille.png
A newspaper illustration from The Penny Satirist (6 September 1845), depicting the inmates of Andover workhouse fighting over bones to eat.

The Andover workhouse scandal arose when the inhumane conditions at the workhouse in Andover, Hampshire, England were exposed by journalists and politicians in 1845. The inmates were kept starving by the workhouse master who stole from the food supplies provided, which were already smaller in quantity than the subsistence diet decreed by the Poor Law Commission. Hunger drove the inmates to eat the bones which they were supposed to crush to make fertilizer, and the regime was operated like a penal settlement. John Walter, who was the editor of The Times and an outspoken critic of the Poor Laws, took a special interest in the case and his newspaper covered the scandal and the subsequent public inquiries in great detail. Parliament set up a select committee to investigate the workhouse in March 1846, and as a result of its findings and the weight of public opinion the Commission was abolished in 1847.

Prior to 1834 the poor were provided for under the auspices of the "Old Poor Law," introduced in the Tudor period, which was funded by a parish rate levied on landowners and tenants. From this fund, each parish provided relief payments to residents who were ill or out of work. As the population grew – increasing by two thirds to almost 15 million between 1801 and 1830 – more and more people became dependent on parish relief, ratepayers began to complain about the costs, and increasingly lower levels of relief were provided.[1] Three and a half "one gallon" bread loaves (each weighing 8 pounds and 11 ounces) per week were considered necessary for a man in 1795.[2][3] By November 1830, the ration in the Andover area had been reduced to one quarter of a loaf per day (i.e., reduced by half).[1] There was also a feeling amongst the middle and upper classes that they were paying the poor to be idle and avoid work.[4] The way in which poor law funds were disbursed led to a further reduction in agricultural wages, since farmers would pay their workers as little as possible, knowing that the parish fund would top up wages to a basic subsistence level (see Speenhamland system).

The introduction of mechanical threshing machines, which could do the work of many men, further threatened the livelihoods of hundreds of thousands of farmworkers.[5] Following poor harvests in 1828 and 1829, farm labourers faced the approaching winter of 1830 with dread. The Swing Riots – which had begun in Kent in June 1830 – finally broke out in Andover and the surrounding parishes on 19 November 1830, coinciding with the Annual Fair when the town was full with labourers.[1] Over the next two days gangs of labourers set fire to haystacks and destroyed threshing machines while demanding an increase in wages and a reduction in rents. On the afternoon of 20 November a mob of 300 labourers set off from the Angel Inn public house and attacked the Waterloo Ironworks in Anna Valley on the outskirts of the town, pulling down walls and part of the roof, smashing some half-made ploughs and damaging the foundry's crane and waterwheel.[6] The town's magistrates wrote to the Home Secretary, Lord Melbourne on 20 and 21 November requesting military support to restore order. By 15:00 on 21 November, The Times reported, "an immense multitude" had assembled in the town centre and, "flushed with liquor" proceeded to break down the gates of the gaol and release one of their leaders who had earlier been arrested. Armed with clubs, staves and flails they threatened to burn down the properties of anybody who refused to give them money, saying that they had been "starving with their wives and families on potatoes and bread long enough."[7] On 22 November the 9th Lancers were deployed to Andover and the riots were quelled by 23 November.[1][8] By 29 November, Winchester gaol was full to capacity with arrested labourers, and more prisoners were being held under guard by the Lancers in their barracks.[9]

In the trials that followed, held before Mr. Baron Vaughan, Mr. Justice James Parke and Mr. Justice Alderson at a Special Commission of Assize at Winchester in December 1830, the accused were not allowed counsel to represent them, and the jury consisted entirely of magistrates, three of whom had been directly affected by property damage during the riots.[1][10] The charge laid against the majority was one of "riotous assembly." Ten Andover labourers received the death sentence, subsequently commuted to transportation to Australia. Two Hampshire labourers were hanged and the other convicted men were made to watch the executions.[6] 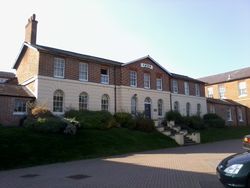 The former Andover workhouse is now a Grade II listed building and has been converted into luxury residential properties renamed "The Cloisters."

In the wake of the Swing Riots which had swept the country between June and November 1830, the Prime Minister, Earl Grey, established the Royal Commission into the Operation of the Poor Laws 1832 to decide how to change the Poor Law systems in England and Wales. The Commission proposed the "New Poor Law" be governed by two overarching principles:

The report also stated that parishes should be grouped into "unions" in order to spread the cost of workhouses and a central authority should be established in order to enforce these measures. The Poor Law Commission set up by Earl Grey took a year to write its report and the recommendations passed easily through Parliament supported by both main parties, the Whigs and the Tories. The bill gained Royal Assent in 1834.

Following the introduction of the new law, the poor-rate fell by twenty per cent and the system was credited with having achieved this and having proved that poverty was often caused by idleness. However, it was actually due to a "surge of prosperity" nationally, which came to a sudden end in 1837 at the same time as the weather deteriorated causing harvests to fail.[1] In 1839 there was a further decline in trade, growth of unemployment, and poor harvests which were repeated in 1841 and 1842.[13] Conditions were worsened by the European Potato Failure due to potato blight that struck Northern Europe in the mid-1840s, leading to the period being called "the Hungry Forties."

On 11 July 1835 at the first meeting of the Board of Guardians of the newly formed Andover Union, it was decided to commission the construction of a new workhouse "calculated to contain 400 persons." Andover's new workhouse was designed by architect Sampson Kempthorne, using his standard "cruciform" plan which provided an entrance and administrative block at the east "containing the board-room, porter's quarters, a nursery and stores. To the rear, four wings radiated from a central supervisory hub which contained the kitchens, with the master's quarters above. Females were accommodated at the north side and males at the south. The west of these wings contained the dining-hall which was also used as a chapel. Girls and boys school-rooms and dormitories lay down the west side with exercise yards beyond. Along the north side of the workhouse were casual wards and female sick wards. Male sick wards were at the south."[14]

John Walter and The Times

One of the most outspoken critics of the New poor law was John Walter, the owner and editor of The Times newspaper, and as the bill had passed through Parliament he had written thirty editorials and raised several petitions against it.[1] After the bill passed into law, The Times continued to battle against the workhouse system, keeping it in the news every day "sometimes with only a single item; often with a thunderous editorial; now and again with a lengthy report on a detailed case of brutality or hardship which [his] special correspondents... had managed to expose in spite of concealment."[1]

In August 1845, rumours began to circulate around Andover that inmates of the town's workhouse were being deprived of food and had taken to eating the marrow from horse, dog and cattle bones which they were employed to crush to produce bone meal fertiliser.[15] Having heard the rumours himself, Hugh Munday, a local magistrate and also one of the elected guardians of the workhouse, made an unannounced visit to the workhouse accompanied by a local doctor.