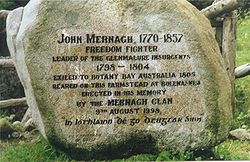 Epigraphy in honour of an Irish prisoner in the Australian penal colony of Botany Bay.

A penal colony is a settlement used to exile prisoners and separate them from the general populace by placing them in a remote location, often an island or distant colonial territory. Although the term can be used to refer to a correctional facility located in a remote location it is more commonly used to refer to communities of prisoners overseen by wardens or governors having absolute authority.

Historically penal colonies have often been used for penal labour in an economically underdeveloped part of a state's (usually colonial) territories, and on a far larger scale than a prison farm. In practice such penal colonies may be little more than slave communities. The British, French, and other colonial empires heavily used North America and other parts of the world as penal colonies to varying degrees, sometimes under the guise of indentured servitude or similar arrangements. 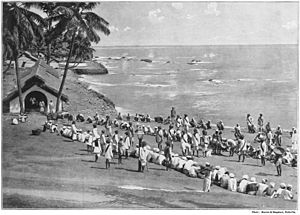 The British used colonial North America as a penal colony through a system of indentured servitude. Merchants would transport the convicts and auctioned them off to (for example) plantation owners upon arrival in the colonies. It is estimated that some 50,000 British convicts were sent to colonial America, representing perhaps one-quarter of all British emigrants during the 18th century. The State of Georgia for example was first founded by James Edward Oglethorpe by using penal prisoners taken largely from debtors' prison, creating a "Debtor's Colony". However, even though this largely failed, the idea that the state began as a penal has stayed both in popular history, and local lore.[1] The English also would often ship Irish and Scots to the Americas whenever rebellions took place in Ireland or Scotland, and they would be treated similar to the convicts, except that this also included women and children.

When that avenue closed in the 1780s after the American Revolution, Britain began using parts of what is now known as Australia as penal settlements. Australian penal colonies included Norfolk Island, Van Diemen's Land (Tasmania), Queensland and New South Wales. Advocates of Irish Home Rule or of Trade Unionism (the Tolpuddle Martyrs) sometimes received sentences of deportation to these Australian colonies.[citation needed]. Without the allocation of the available convict labor to farmers, to pastoral squatters, and to Government projects such as roadbuilding, colonisation of Australia may not have been possible,[citation needed] especially considering the considerable drain on non-convict labor caused by several goldrushes that took place in the second half of the 19th century after the flow of convicts had dwindled and (in 1868) ceased.

Bermuda, off the North American continent, was also used during the Victorian period. Convicts housed in hulks were used to build the Royal Naval Dockyard there, and during the Second Boer War (1899-1902), Boer prisoners-of-war were sent to the archipelago and imprisoned on one of the smaller islands.

In colonial India, the British made various penal colonies. Two of the most infamous ones are on the Andaman Islands and Hijli. In the early days of settlement, Singapore was the recipient of Indian convicts, who were tasked with clearing the jungles for settlement and early public works.

The concept of remote and inhospitable prison planets has been employed by science fiction writers. Some famous examples include: