Arabic language in the United States 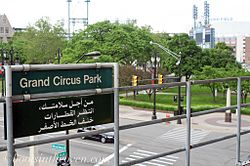 The Arabic language is the fastest-growing foreign language taught at U.S. colleges and universities, a trend mirrored at the University of Iowa.

Arabic in 2006 became the 10th most-studied language in the United States.[8]

In 2013, Arabic was ranked the 8th place on the list of enrollments in higher education in the USA.