From Infogalactic: the planetary knowledge core
Jump to: navigation, search
Not to be confused with Austroasiatic languages.
"Austronesian" redirects here. For other uses, see Austronesian (disambiguation).

Different sources count languages differently, but Austronesian and Niger–Congo are the two largest language families in the world, each having roughly one-fifth of the total languages counted in the world. The geographical span of Austronesian was the largest of any language family before the spread of Indo-European in the colonial period, ranging from Madagascar off the southeastern coast of Africa to Easter Island in the eastern Pacific. Hawaiian, Rapa Nui, and Malagasy (spoken on Madagascar) are the geographic outliers of the Austronesian family.

According to Robert Blust (1999), Austronesian is divided in several primary branches, all but one of which are found exclusively on Taiwan. The Formosan languages of Taiwan are grouped into as many as nine first-order subgroups of Austronesian. All Austronesian languages spoken outside Taiwan (including its offshore Yami language) belong to the Malayo-Polynesian branch, sometimes called Extra-Formosan.

It is difficult to make generalizations about the languages that make up a family as diverse as Austronesian. Speaking very broadly, the Austronesian languages can be divided into three groups of languages: Philippine-type languages, Indonesian-type languages and post-Indonesian type (Ross 2002). The first group includes, besides the languages of the Philippines, the Austronesian languages of Taiwan, Sabah, North Sulawesi and Madagascar. It is primarily characterized by the retention of the original system of Philippine-type voice alternations, where typically three or four verb voices determine which semantic role the "subject"/"topic" expresses (it may express either the actor, the patient, the location and the beneficiary, or various other circumstancial roles such as instrument and concomitant). The phenomenon has frequently been referred to as focus (not to be confused with the usual sense of that term in linguistics). Furthermore, the choice of voice is influenced by the definiteness of the participants. The word order has a strong tendency to be verb-initial. In contrast, the more innovative Indonesian-type languages, which are particularly represented in Malaysia and western Indonesia, have reduced the voice system to a contrast between only two voices (actor voice and "undergoer" voice), but these are supplemented by applicative morphological devices (originally two: the more direct *-i and more oblique *-an/-[a]kən), which serve to modify the semantic role of the "undergoer". They are also characterized by the presence of preposed clitic pronouns. Unlike the Philippine type, these languages mostly tend towards verb-second word-orders. A number of languages, such as the Batak languages, Old Javanese, Balinese, Sasak and several Sulawesi languages seem to represent an intermediate stage between these two types.[3][4] Finally, in some languages, which Ross calls "post-Indonesian", the original voice system has broken down completely and the voice-marking affixes no longer preserve their functions.

The Austronesian languages tend to use reduplication (repetition of all or part of a word, such as wiki-wiki or agar-agar), and, like many East and Southeast Asian languages, most have highly restrictive phonotactics, with generally small numbers of phonemes and predominantly consonant–vowel syllables.

The internal structure of the Austronesian languages is complex. The family consists of many similar and closely related languages with large numbers of dialect continua, making it difficult to recognize boundaries between branches. However, it is clear that the greatest genealogical diversity is found among the Formosan languages of Taiwan, and the least diversity among the islands of the Pacific, supporting a dispersal of the family from Taiwan or China. The first comprehensive classification to reflect this was Dyen (1965).

The seminal article in the classification of Formosan—and, by extension, the top-level structure of Austronesian—is Blust (1999). Prominent Formosanists (linguists who specialize in Formosan languages) take issue with some of its details, but it remains the point of reference for current linguistic analyses, and is shown below. The Malayo-Polynesian languages are frequently included within Blust's Eastern Formosan branch due to their shared leveling of proto-Austronesian *t, *C to /t/ and *n, *N to /n/, their shift of *S to /h/, and vocabulary such as *lima "five" which are not attested in other Formosan languages.

There appear to have been two great migrations of Austronesian languages that quickly covered large areas, resulting in multiple local groups with little large-scale structure. The first was Malayo-Polynesian, distributed across the Philippines, Indonesia, and Melanesia. The Central Malayo-Polynesian languages are similar to each other not because of close genealogical relationships, but rather because they reflect strong substratum effects from non-Austronesian languages. The second migration was that of the Oceanic languages into Polynesia and Micronesia (Greenhill, Blust & Gray 2008).

In addition to Malayo-Polynesian, thirteen Formosan families are broadly accepted. Debate centers primarily around the relationships between these families. Of the classifications presented here, Blust (1999) links two families into a Western Plains group, two more in a Northwestern Formosan group, and three into an Eastern Formosan group, while Lee (2008)[citation not found] also links five families into a Northern Formosan group. The Austronesian Basic Vocabulary Database (2008) accepts Northern, rejects Eastern, links Tsouic and Rukai (two highly divergent languages), and links Malayo-Polynesian with Paiwan in a Paiwanic group. Ross (2009) splits Tsouic, and notes that Tsou, Rukai, and Puyuma fall outside of reconstructions of Proto-Austronesian.

Other studies have presented phonological evidence for a reduced Paiwanic family of Paiwanic, Puyuma, Bunun, Amis, and Malayo-Polynesian, but this is not reflected in vocabulary. The Eastern Formosan peoples Basay, Kavalan, and Amis share a homeland motif that has them coming originally from an island called Sinasay or Sanasay (Li 2004). The Amis, in particular, maintain that they came from the east, and were treated by the Puyuma, amongst whom they settled, as a subservient group (Taylor 1888).[5] 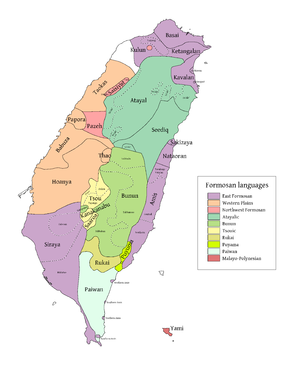 Families of Formosan languages before Chinese colonization of Taiwan, per Blust (1999). 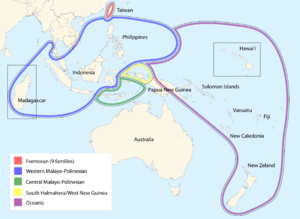 Distribution of the Austronesian languages, per Blust (1999).

(clockwise from the southwest) 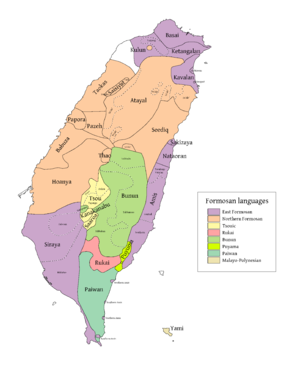 Families of Formosan languages before Chinese colonization, per Li (2008). The three languages in green (Bunun, Puyuma, Paiwan) may form a Southern Formosan branch, but this is uncertain.

This classification retains Blust's East Formosan, and unites the other northern languages. Li proposes a Proto-Formosan (F0) ancestor and equates it with Proto-Austronesian (PAN), following the model in Starosta (1995).[6][7] Rukai and Tsouic are seen as highly divergent,[6] although the position of Rukai is highly controversial.[8] 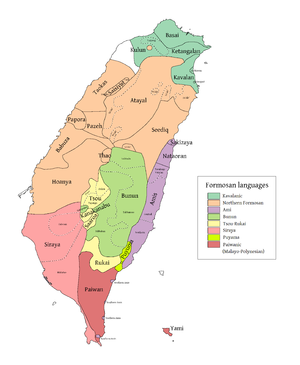 This investigation keeps Li's Northern Formosan, but breaks up Blust's East Formosan, and suggests Paiwan may be the closest to Malayo-Polynesian. It also unites Tsouic and Rukai, the two most divergent languages in Li.

This is an obvious, low-level grouping

These groups are linked with an estimated 97% probability.

Tsou and Rukai are connected with moderate confidence, estimated at 85% probability.

Malayo-Polynesian and Paiwan are linked with a low level of confidence (74%). 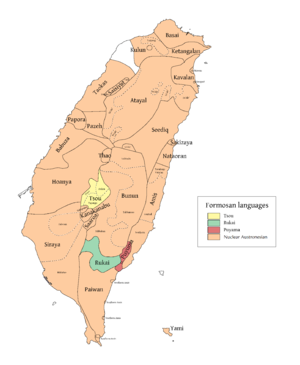 Families of Formosan languages before Chinese colonization, per Ross (2009).

In 2009, Malcolm Ross proposed a new classification of the Austronesian language family based on morphological evidence from various Formosan languages.[9] He proposed that the current reconstructions for Proto-Austronesian actually correspond to an intermediate stage, which he terms "Proto-Nuclear Austronesian". Notably, Ross' classification does not support the unity of the Tsouic languages, instead considering the Southern Tsouic languages of Kanakanavu and Saaroa to be a separate branch. This supports Chang's (2006) claim that Tsouic is not a valid group.[10] 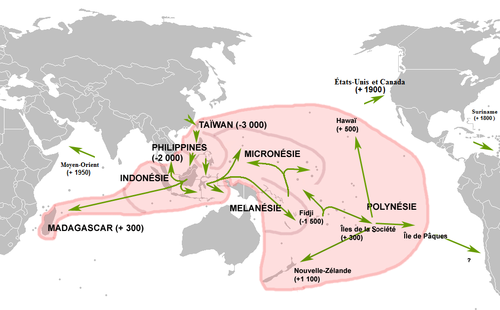 Austronesian languages expansion map. Periods are based on archeological studies, though the association of the archeological record and linguistic reconstructions is disputed.

At least since Sapir (1968), linguists have generally accepted that the chronology of the dispersal of languages within a given language family can be traced from the area of greatest linguistic variety to that of the least. For example, English in North America has large numbers of speakers, but relatively low dialectal diversity, while English in Great Britain has much higher diversity; such low linguistic variety by Sapir's thesis suggests a more recent origin of English in North America. While some scholars suspect that the number of principal branches among the Formosan languages may be somewhat less than Blust's estimate of nine (e.g. Li 2006), there is little contention among linguists with this analysis and the resulting view of the origin and direction of the migration. For a recent dissenting analysis, see (Peiros 2004).

To get an idea of the original homeland of the Austronesian people, scholars can probe evidence from archaeology and genetics. Studies from the science of genetics have produced conflicting outcomes. Some researchers find evidence for a proto-Austronesian homeland on the Asian mainland (e.g., Melton et al. 1998), while others mirror the linguistic research, rejecting an East Asian origin in favor of Taiwan (e.g., Trejaut et al. 2005). Archaeological evidence (e.g., Bellwood 1997) is more consistent, suggesting that the ancestors of the Austronesians spread from the South Chinese mainland to Taiwan at some time around 8,000 years ago. Evidence from historical linguistics suggests that it is from this island that seafaring peoples migrated, perhaps in distinct waves separated by millennia, to the entire region encompassed by the Austronesian languages (Diamond 2000). It is believed that this migration began around 6,000 years ago (Blust 1999). However, evidence from historical linguistics cannot bridge the gap between those two periods. The view that linguistic evidence connects Austronesian languages to the Sino-Tibetan ones, as proposed for example by Sagart (2002), is a minority one. As Fox (2004:8) states:

Linguistic analysis of the Proto-Austronesian language stops at the western shores of Taiwan; any related mainland language(s) have not survived. The only exceptions, the Chamic languages, derive from more recent migration to the mainland (Thurgood 1999:225).

Genealogical links have been proposed between Austronesian and various families of East and Southeast Asia.

A link with the Austroasiatic languages in an 'Austric' phylum is based mostly on typological evidence. However, there is also morphological evidence of a connection between the conservative Nicobarese languages and Austronesian languages of the Philippines. Paul K. Benedict extended the Austric proposal to include the Tai–Kadai and Hmong–Mien families, but this has not been followed by other linguists.

A competing Austro-Tai proposal linking Austronesian and Tai–Kadai is supported by Weera Ostapirat, Roger Blench, and Laurent Sagart, and is based on the traditional comparative method. Ostapirat (2005) proposes a series of regular correspondences linking the two families and assumes a primary split, with Tai–Kadai speakers being the Austronesians who stayed behind in their Chinese homeland. Blench (2004) suggests that, if the connection is valid, the relationship is unlikely to be one of two sister families. Rather, he suggests that proto-Tai–Kadai speakers were Austronesians who migrated to Hainan Island and back to the mainland from the northern Philippines, and that their distinctiveness results from radical restructuring following contact with Hmong–Mien and Sinitic. Sagart's 2005 proposal (Sagart 2005), which may have some support from human population genetics (Li 2005)[citation not found], is that proto-Tai–Kadai was an early Austronesian language that may have back-migrated from northeastern Taiwan to the southeastern coast of China. The apparently cognate words in Tai–Kadai and Austronesian might be explained either as commonly inherited vocabulary, or as loanwords from this hypothetical (but perhaps Malayo-Polynesian) language into proto-Tai–Kadai. (The latter explanation would imply contact rather than a genetic relationship between Tai-Kadai and Austronesian.) Sagart also suggests that Austronesian, in which he includes Tai–Kadai, is ultimately related to the Sino-Tibetan languages and probably has its origin in a Neolithic community of the coastal regions of prehistoric North China or East China.