Aria (Greek: Ἀρ(ε)ία Ar(e)ia, Latin Aria, representing Old Persian. Haraiva, Avestan Haraeuua) is the name of an Achaemenid region centered on the Herat city of present-day western Afghanistan. In classical sources, Aria has been several times confused with the greater region of ancient Ariana, of which Aria formed a part.

Aria was an Old Persian satrapy, which enclosed chiefly the valley of the Hari River (Greek Ἄρ(ε)ιος, this being eponymous to the whole land according to Arrian[1]) and which in antiquity was considered as particularly fertile and, above all, rich in wine. The region of Aria was separated by mountain ranges from the Paropamisadae in the east, Parthia in the west and Margiana and Hyrcania in the north, while a desert separated it from Carmania and Drangiana in the south. It is described in a very detailed manner by Ptolemy and Strabo [2] and corresponds, according to that, almost to the Herat Province of today's Afghanistan. In this sense the term is used correctly by some writers, e.g. Herodotus (3.93.3, where the Areioi are mentioned together with the Parthians, Chorasmians, and Sogdians); Diodorus (17.105.7; 18.39.6); Strabo (2.1.14; 11.10.1, cf. also 11.8.1 and 8; 15.2.8 and 9); Arrian (Anabasis 3.25.1); Pomponius Mela (1.12, where we read that “nearest to India is Ariane, then Aria”). 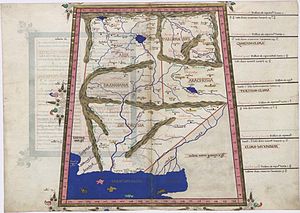 Its original capital was Artacoana (Ἀρτακόανα)[3] or Articaudna (Ἀρτίκαυδνα) according to Ptolemy. In its vicinity, a new capital was built, either by Alexander the Great himself or by his successors, Alexandria Ariana (Ἀλεξάνδρεια ἡ ἐν Ἀρίοις), modern Herat in northwest Afghanistan. Ptolemy lists several other cities, an indication of the province's wealth and fertility. The most important, according to Ptolemy and Arrian were:[4][5]

The Persian Achaemenid district of Aria is mentioned in the provincial lists that are included in various royal inscriptions, for instance, in the Behistun inscription of Darius I (c. 520 BC). Representatives from the district are depicted in reliefs, e.g., at the royal Achaemenid tombs of Naqsh-e Rustam and Persepolis. They are wearing Scythian-style dress (with a tunic and trousers tucked into high boots) and a twisted turban around the head.

At the time of Alexander the Great, Aria was obviously an important district. It was administered by a satrap, called Satibarzanes, who was one of the three main Persian officials in the East of the Empire, together with the satrap Bessus of Bactria and Barsaentes of Arachosia. In late 330 BC, Alexander the Great, captured the Arian capital Artacoana. The province was part of the Seleucid Empire but was captured by others on various occasions and became part of the Parthian Empire in 167 BC. Aria later on became a province of the Sassanid Empire.