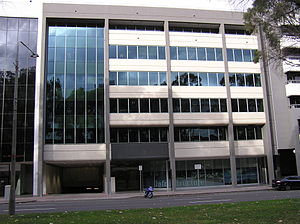 62 Northbourne Avenue in Canberra, which contains the ATSB head office

The Australian Transport Safety Bureau (ATSB) is Australia’s national transport safety investigator. The ATSB is the federal government body responsible for investigating transport-related accidents and incidents within Australia. It covers air, sea and rail travel. The ATSB is an independent Commonwealth Government statutory agency. The ATSB is governed by a Commission and is entirely separate from transport regulators, policy makers and service providers. Its headquarters are located in the 62 Northbourne Avenue building in Canberra, Australian Capital Territory.[3] It has field offices in Adelaide, Brisbane, and Perth. It has about 110 employees, including about 60 investigators of aviation, marine, and rail accidents and incidents.[4]

The Australian Transport Safety Bureau was formed on 1 July 1999. It combined the Bureau of Air Safety Investigation (BASI), Marine Incident Investigation Unit (MIIU) and parts of the Federal Office of Road Safety (FORS).[1] Until the ATSB railway safety had been the responsibility of each state government.

The Marine Incident Investigation Unit (MIIU) was created on 1 January 1991 under the direction of the Inspector of Marine Accidents, a statutory position. Previously a model was adopted in 1921 via amendment to the Navigation Act 1912. It was based on British law and practices dating to 1850.[1]

Between July 1999 and March 2008 Federal government initiatives dealing with road safety were primarily within the ATSBs responsibilities in the Road Safety Branch (RSB). The RSB later became part of 'The Infrastructure and Surface Transport Policy Division' of the Department of Infrastructure, Transport, Regional Development and Local Government.[6]

Under the provisions of the TSI Act, ATSB investigators may interview anyone involved directly or indirectly in a transport safety occurrence. A comprehensive regime of provisions within the TSI Act is in place to maintain the confidentiality of, and legal protection for, a range of sensitive safety information gathered by ATSB investigators.[7]