Aviation, or air transport, refers to the activities surrounding mechanical flight and the aircraft industry. Aircraft includes fixed-wing and rotary-wing types, morphable wings, wing-less lifting bodies, parachutes, as well as lighter-than-air craft such as balloons and airships. Aviation began in the 18th century with the development of the hot air balloon, an apparatus capable of atmospheric displacement through buoyancy. Some of the most significant advancements in aviation technology came with the controlled gliding flying of Otto Lilienthal; then a largest step in significance came with the construction of the first powered airplane by the Wright brothers in the early 1900s. Since that time, aviation has been technologically revolutionized with the introduction of the jet which permitted a major form of transport throughout the world.

BAE Systems' headquarters
BAE Systems is a British defence and aerospace company headquartered at Farnborough, UK, which has worldwide interests, particularly in North America through its subsidiary BAE Systems Inc. BAE is the world's third-largest defence contractor and the largest in Europe. BAE was formed on 30 November 1999 by the £7.7 billion merger of two British companies: Marconi Electronic Systems, the defence electronics and naval shipbuilding subsidiary of The General Electric Company plc (GEC) and aircraft, munitions and naval systems manufacturer British Aerospace (BAe). It has increasingly disengaged from its businesses in continental Europe in favour of investing in the United States. Since its formation it has sold its shares of Airbus, EADS Astrium, AMS and Atlas Elektronik. BAE Systems is involved in several major defence projects, including the F-35 Lightning II, the Eurofighter Typhoon and the Royal Navy Queen Elizabeth class aircraft carriers. The company has been the subject of criticism, both general opposition to the arms trade and also specific allegations of unethical and corrupt practices, including the Al Yamamah contracts with Saudi Arabia that have earned BAE and its predecessor £43 billion in twenty years.
edit 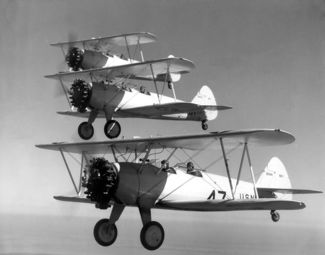 Boeing-Stearman Model 75's. Taken in 1936 at NAS Pensacola during training of the first class of the Naval Aviation Cadet program. Photo includes Boone Guyton (plane in rear) who later became a test pilot for Chance-Vought (Vought Sikorsky) in 1939.

Template:/box-header ...that Ansett Airlines Flight 232 from Adelaide to Alice Springs in 1972 was the first aircraft hijacking to take place in Australia?

...that the Cessna 165 aircraft was instrumental in the recovery of the Cessna Aircraft Company in the years following the Great Depression?

... that in the middle of building Fagernes Airport, Leirin, the authorities changed their minds and gave the airport more than twice the runway length? Template:/box-footer

NASA's Space Shuttle, officially called the Space Transportation System (STS), is the spacecraft which was used by the United States government for its human spaceflight missions. At launch, it consists of a rust-colored external tank (ET), two white, slender Solid Rocket Boosters (SRBs), and the orbiter, a winged spaceplane which is the space shuttle in the narrow sense.

The orbiter carries astronauts and payload such as satellites or space station parts into low earth orbit, into the Earth's upper atmosphere or thermosphere. Usually, five to seven crew members ride in the orbiter. The payload capacity is 22,700 kg (50,000 lb). When the orbiter's mission is complete it fires its Orbital Maneuvering System (OMS) thrusters to drop out of orbit and re-enters the lower atmosphere. During the descent and landing, the shuttle orbiter acts as a glider, and makes a completely unpowered ("dead stick") landing.

The Wright brothers, Orville Wright (August 19, 1871 - January 30, 1948) and Wilbur Wright (April 16, 1867 - May 30, 1912), are generally credited with making the first controlled, powered, heavier-than-air flight on December 17, 1903. In the two years afterward, they developed their flying machine into the world's first practical airplane, along with many other aviation milestones.

In 1878 Wilbur and Orville were given a toy "helicopter" by their father. The device was made of paper, bamboo and cork with a rubber band to twirl its twin blades, and about a foot long. The boys played with it until it broke, then built their own. In later years, they pointed to their experience with the toy as the initial spark of their interest in flying.