From Infogalactic: the planetary knowledge core
Jump to: navigation, search
This article is about the battle. For the Anglo-Saxon poem, see The Battle of Maldon. 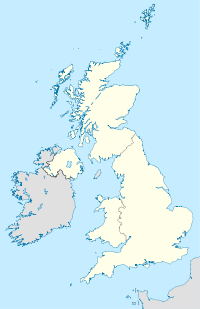 Map showing the location of the Battle of Maldon

The Battle of Maldon took place three weeks before Whitsun on 10 (possibly 11) August 991 AD near Maldon beside the River Blackwater in Essex, England, during the reign of Aethelred the Unready. Earl Byrhtnoth and his thegns led the English against a Viking invasion. The battle ended in an Anglo-Saxon defeat. After the battle Archbishop Sigeric of Canterbury and the aldermen of the south-western provinces advised King Aethelred to buy off the Vikings rather than continue the armed struggle. The result was a payment of 10,000 Roman pounds (3,300 kg) of silver, the first example of Danegeld in England.

An account of the battle, embellished with many speeches attributed to the warriors and with other details, is related in an Old English poem which is usually named The Battle of Maldon. A modern embroidery created for the millennium celebration in 1991 and, in part, depicting the battle, can be seen at the Maeldune Centre in Maldon.

One manuscript of the Anglo-Saxon Chronicle said a Norwegian, Olaf Tryggvason, led the Viking forces, estimated to have been between 2,000 and 4,000 fighting men. A source from the 12th century, Liber Eliensis, written by the monks at Ely, suggests that Byrhtnoth had only a few men to command: "he was neither shaken by the small number of his men, nor fearful of the multitude of the enemy". Not all sources indicate such a disparity in numbers.

The poem The Battle of Maldon

Main article: The Battle of Maldon

'The Battle of Maldon' is the name conventionally given to a surviving 325-line fragment of Old English poetry. Linguistic study has led to the conjecture that initially the complete poem was transmitted orally, then in a lost manuscript in the East Saxon dialect and now survives as a fragment in the West Saxon form, possibly that of a scribe active at the Monastery of Worcester late in the 11th century.[1] It is fortuitous that this was attached at an early date to a very notable manuscript, Asser's Life of King Alfred, which undoubtedly assisted in its survival. The manuscript, by now detached, was burned in the Cotton library fire at Ashburnham House in 1731. The keeper of the collection, John Elphinstone (or his assistant, David Casley),[2] had transcribed the 325 lines of the poem in 1724, but the front and back pages were already missing from the manuscript (possibly around 50 lines each): an earlier catalogue described it as fragmentum capite et calce mutilatum ("mutilated at head and heel"). As a result, vital clues about the purpose of the poem and perhaps its date have been lost.

At the time of battle, English royal policy of responding to Viking incursions was split. Some favoured paying off the Viking invaders with land and wealth, while others favoured fighting to the last man. The poem suggests that Byrhtnoth held this latter attitude, hence his moving speeches of patriotism.

The Vikings sailed up the Blackwater (then called the Panta), and Byrhtnoth called out his levy. The poem begins with him ordering his men to stand and to hold weapons. His men, except for his household guard, were peasants and householders from the area. He ordered them to "send steed away and stride forwards": they arrived on horses but fought on foot. The Vikings sailed up to a small island in the river. At low tide, the river leaves a land bridge from this island to the shore; the description seems to have matched the Northey Island causeway at that time. This would place the site of the battle about two miles southeast of Maldon. Olaf addressed the Saxons, promising to sail away if he was paid with gold and armour from the lord. Byrhtnoth replied, "We will pay you with spear tips and sword blades."

Olaf's forces could not make headway against the troops guarding the small land bridge, and he asked Byrhtnoth to allow his warriors onto the shore. Byrhtnoth, for his ofermōde (line 89b), let all the Vikings cross to the mainland. Battle was joined, but an Englishman called Godrīc fled riding Byrhtnoth's horse. Godrīc's brothers Godwine and Godwīg followed him. Then many English fled, recognizing the horse and thinking that its rider was Byrhtnoth fleeing. To add insult to injury, it is stated that Godric had often been given horses by Byrhtnoth, a detail that, especially during the time period, would have had Godric marked as a coward and a traitor, something that could have easily been described as worse than death. The Vikings overcame the Saxons after losing many men, killing Byrhtnoth. After the battle Byrhtnoth's body was found with its head missing, but his gold-hilted sword was still with his body.

There is some discussion about the meaning of "ofermōd." Although literally meaning "over-heart" or "having too much heart", it could mean either "pride" or "excess of courage" (cf. Swedish övermod or German Übermut, which mean both "hubris" and "recklessness"). One argument is that the poem was written to celebrate Byrhtnoth's actions and goad others into heroic action, and Byrhtnoth's action stands proudly in a long tradition of heroic literature. Another viewpoint, most notably held by J.R.R. Tolkien, is that the poem is an elegy on a terrible loss and that the monastic author pinpoints the cause of the defeat in the commander's sin of pride, a viewpoint bolstered by the fact that ofermōd is, in every other attested instance, used to describe Satan's pride.[3] There is a memorial window, representing Byrhtnoth's dying prayer, in St Mary's church at Maldon.

It is believed by many scholars that the poem, while based upon actual events and people, was created to be less of a historical account and more of a means of enshrining and lifting up the memories of the men who fought and lost their lives on the battlefield protecting their homeland, especially in the case of the English commander of the battle, Byrhtnoth. He (Byrhtnoth) seems to embody many of the virtues that are uplifted in the Anglo-Saxon world, and is compared often by many scholars to the character Beowulf.

Norse invaders and Norse raiders differed in purpose. The forces engaged by the Anglo-Saxon were raiding, or (in Old Norse) "í víking", to gather loot, rather than to occupy land for settlement. Therefore, if Byrhtnoth's forces had kept the Vikings off by guarding the causeway or by paying them off, Olaf would likely have sailed farther up the river or along the coast, and raided elsewhere. As a man with troops and weapons, it might be that Byrhtnoth had to allow the Vikings ashore to protect others. The poem may, therefore, represent the work of what has been termed the "monastic party" in Ethelred's court, which advocated a military response, rather than tribute, to all Norse attacks.

The battlefield from the air. Earl Byrhtnoth's forces were drawn up on the shore (top); Olaf's men had to cross the causeway from Northey Island (left). 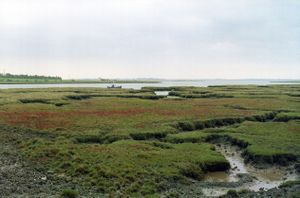 The death of Byrhtnoth, an ealdorman of Essex, was recorded in four versions of the Anglo-Saxon Chronicle. Its Cotton Tiberius manuscript says for the year 991:-

The Life of Oswald, written in Ramsey, England around the same time as the battle, portrays Byrhtnoth as a nearly supernatural, prophetic figure.

In 1170, the Book of Ely retold and embroidered the story and made the battle two fights, with the second being a fortnight long against overwhelming odds. These texts show, to some degree, the growth of a local hero cultus.

In the Cotton library, the "Battle of Maldon" text had been in Otho A xii. The Elphinstone transcription is in the British Library.