From Infogalactic: the planetary knowledge core
Jump to: navigation, search
This article is about the novel by Frans G. Bengtsson. For the 1963 film loosely based on the book, see The Long Ships (film). For Viking ships in general, see Longship.

The Long Ships or Red Orm (original Swedish: Röde Orm meaning Red Serpent or Red Snake) is an adventure novel by the Swedish writer Frans G. Bengtsson. The narrative is set in the late 10th century and follows the adventures of the Viking Röde Orm - Red Serpent, - called "Red" for his hair and his temper, a native of Scania. The book portrays the political situation of Europe in the later Viking Age, Andalusia under Almanzor, Denmark under Harald Bluetooth, followed by the struggle between Eric the Victorious and Sweyn Forkbeard, Ireland under Brian Boru, England under Ethelred the Unready, and the Battle of Maldon, all before the backdrop of the gradual Christianisation of Scandinavia, contrasting the pragmatic Norse pagan outlook with the exclusiveness of Islam and Christianity.[1]

The novel is divided into two parts, published in 1941 and 1945, with two books each. It is one of the most widely read books in Sweden, topping the charts of most loaned books at Swedish libraries for many years.[citation needed] The first part was translated to English by Barrows Mussey as Red Orm in 1943, but later editions and newer translations by Michael Meyer use the title The Long Ships. The book has been translated into at least 23 languages.

The first book covers the years 982 to 990. While still a youth, Orm is abducted by a Viking party led by Krok and they sail south. They fall captive to Andalusian Muslims and serve as galley slaves for more than two years, later becoming members of Almanzor's bodyguard for four years. They return to Denmark to King Harald Bluetooth's court where Orm meets Ylva. Orm later returns to Scania with Rapp. Orm and Rapp join a Viking party raiding England again after a brief period of peace in that area following the reconquest of the Danelaw in the mid-10th century by King Edgar, Ethelred's father. Orm joins a party led by Thorkell the High in England and when he learns that Harald's daughter Ylva is staying in London, gets baptised and marries Ylva. They move to a neglected farm, his mother's inheritance in Göinge, northern Skåne, near the border with Småland. During the following years (992 to 995), Orm prospers, and Ylva gives birth to twin girls (Oddny and Ludmilla), a son, Harald, and later to another son (though possibly from Rainald), Svarthöfde (Blackhair in the Michael Meyer translation). Meanwhile, Orm also gets busy in converting the heathens in the district, with the help of Father Willibald.

The year 1000 passes without Christ returning. In 1007, with Orm now forty-two, his brother Are returns from the east, bringing the news of a treasure ("Bulgar gold") he had hidden. Orm decides to travel to Kievan Rus for the gold, and together with Toke and the Finnveding chieftain Olof mans a ship. They recover the treasure and return home safely. From then on, Orm and Toke live in peace and plenty as good neighbours, and Svarthöfde Ormsson becomes a famous Viking, fighting for Canute the Great. The story ends with the statement that Orm and Toke in their old age "did never tire of telling of the years when they had rowed the Caliph's ship and served my lord Al-Mansur." 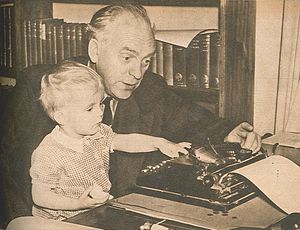 The Swedish writer Sven Stolpe reports that somebody asked author Frans G. Bengtsson "what intentions he had with The Long Ships", to which Bengtsson responded that he had no particular intentions. "I just wanted to write a story that people could enjoy reading, like The Three Musketeers or the Odyssey."

The research for the book was based largely on Snorri Sturluson's Heimskringla and other old Icelandic literature, but also on medieval chronicles and contemporary research, and historic names, people and events were woven into the fiction. The language of the novel is modelled on the Icelandic sagas. Early in his career, Bengtsson had held a romantic view on the saga literature, promoting an elevated, almost sacral prose in translations, but when writing The Long Ships he instead made use of the saga's faculties for wisecracks and comic understatements. The main characters were written as likable anti-heroes, far from the romantic view of Vikings.[2] Like the sagas, the book relies on verbs and nouns to drive the narrative, with only a minimum of adjectives and descriptive passages. In essays, Bengtsson expresses disgust with "psychological realism" in the literature of his day where the thoughts and feelings of the characters are discussed explicitly rather than indicated by actions and outward signs. In the Swedish original of The Longships, the grammar is deliberately slightly archaic.

The 1964 British-Yugoslav film The Long Ships was very loosely based on the book, retaining little more than the title (of the English translation) and the Moorish settings. In the 1980s, there were plans for a large-scale Swedish screen adaptation. The film was supposed to be directed by Hans Alfredson and star Stellan Skarsgård as Orm and Sverre Anker Ousdal as Toke. The project was cancelled for financial reasons, but Alfredson's script was reworked into radio theatre which was broadcast in 1990.[3] A comic adaptation by Charlie Christensen was published in four volumes between 2000 and 2004. In 2011 the Swedish production company Fladen Film announced they had acquired the film rights for the book, and that an adaptation was under development.[4] In May 2014, during the press conference of Swedish film company Film i Väst at the 2014 Cannes Film Festival, Danish film producer Peter Aalbæk Jensen, from Danish film company Zentropa, said that he was going to produce an adaptation of the novel.[5] Aalbæk said that he had Stellan Skarsgård in mind as playing the old Röde Orm and his acting sons Alexander, Gustaf, Bill and Valter playing Röde Orm at various stages in his life. This adaptation is planned to be split into two films and also as a TV-series in four parts. Hans Petter Moland from Norway will be directing. Stellan Skarsgård has expressed interest in acting in the film if the script will be good.[6] Filming is expected to start in Västra Götaland in 2016.