The Battle of the Rhône Crossing took place during the Second Punic War. The Carthaginian army under Hannibal Barca, while marching to Italy in the autumn of 218 BC, fought an army of the gallic Volcae tribe on the east bank of the Rhone River possibly near Aurasio. The pro-Roman Volcae, acting on behalf of a Roman army camped on the east bank near Massalia, intended to prevent the Carthaginians from crossing and invading Italy. Devising a plan to circumvent the Volcae, the Carthaginians, before crossing the river to attack the Gauls, had sent a detachment upriver under Hanno, son of Bomilcar, to cross at a different point and take position behind the Gauls. Hannibal led the main army across after Hanno sent smoke signals saying that the ambush was in place. As the Gauls massed to oppose Hannibal’s force, Hanno attacked them from behind and routed their army. Although the battle was not fought against a Roman army, the result of the battle had a profound effect on the war. Had the Carthaginians been prevented from crossing the Rhone, the 218 invasion of Italy might not have taken place. This is the first major battle that Hannibal fought outside the Iberian Peninsula. 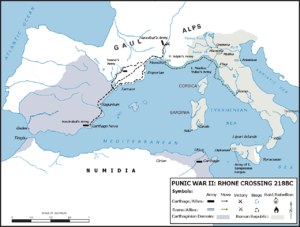 Both Carthage and Rome were in the process of mobilizing their resources for the coming conflict. Hannibal directed the Punic effort, while the Roman Senate decided on the Roman deployment of forces.

The Roman navy had already been mobilized by 218 BC, having launched 220 quinqueremes,[2] perhaps for the Second Illyrian War during 220/219 BC. Consul Tiberius Sempronius Longus had received two legions (8,000 infantry and 600 cavalry) plus 16,000 allied infantry and 1,800 allied cavalry and instructions to sail for Sicily in 160 great warships and 12 light galleys and from there to Africa provided the other consul could keep Hannibal out of Italy. (He never got to Africa.) Publius Cornelius Scipio received two legions of the same number of infantry and cavalry plus 14,000 allied infantry and 1,600 allied cavalry with 65 banked ships for transport. Lucius Manlius was given two legions with 10,000 allied infantry and 1,000 cavalry.[3] Gauls of the Boii and Insubres tribes in northern Italy had attacked the settlers intended to build the Roman colonies of Placentia and Cremona, and had penned them and a small Roman relief force in Mutina. One of the two legions originally intended for Scipio (along with an allied detachment) was diverted for the relief of Mutina under the Praetor Lucius Manlius Vulso and for the building of the colonies, which were to be walled castra.[4] (Just in time, as Scipio had to fall back on Placentia after the Battle of Ticinus and on Cremona after the Battle of the Trebbia.) A fresh legion (together with a contingent of allied troops) was raised to replace this detachment, delaying Scipio's departure.

Hannibal had dismissed his army to winter quarters after the Siege of Saguntum. When the army assembled in the summer of 218 BC, Hannibal stationed 15,000 soldiers and 21 elephants[5] in Carthaginian controlled Iberia under Hasdrubal Barca, and sent 20,000 soldiers to Africa, with 4,000 garrisoning Carthage itself.[6] The army that marched for Italy from Cartagena is supposed to have numbered 90,000 foot and 12,000 cavalry, and 37 elephants. The elephants come from Appian.[7] There is no mention of the elephants by Polybius or Livy, so it has been speculated that the elephants may have been carried to Emporiae by sea.[8] The Iberian contingent of the Punic navy numbered 50 quinqueremes (only 32 were manned) and 5 triremes, which remained in home waters. Carthage mobilized at least 55 quinqueremes for immediate raids on Italy and Sicily.

Hannibal marched from Cartagena in May, divided his army into three columns, crossed the Ebro and subdued the area between the Pyrenees, Ebro and Siccle rivers after a two-month-long campaign. Before crossing the Pyrenees, Hannibal left Hanno with 11,000 soldiers to guard the newly conquered area, along with all the heavy baggage, and released 10,000 reluctant soldiers from the invasion. Hannibal had used diplomacy to pacify the Gallic tribes beyond the Pyrenees, and his march was not contested until the Carthaginians reached the territory of the Volcae on the banks of the Rhône by late September. By then, the army had shrunk to 38,000 foot and 8,000 horsemen. After reaching the west bank of the river, Hannibal decided to rest for three days. The Carthaginians collected boats and built rafts as they prepared to cross the river. Although the Volcae inhabited both banks of the river, they had retreated to the eastern bank, where they encamped and awaited the Carthaginian crossing attempt.

Hannibal put Hanno, son of Bomilcar, in charge of a mobile column made up of infantry and cavalry on the third night, and sent this force upriver under cover of darkness to find another suitable crossing place. Led by local guides, Hanno located a crossing about 25 miles (40 km) to the north of the Carthaginian camp near an "island",[9] and crossed the river undetected with the aid of hastily built rafts. Some Iberians crossed the river using inflated animal skins. This detachment then rested for a day. They moved south on the following night (the second night after leaving the main army) and reached behind the Volcae camp at dawn. 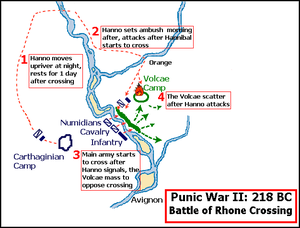 Hanno signalled Hannibal by lighting a beacon and using smoke. The main Punic army started to cross the 1000 yard wide river. The rafts carrying Numidian cavalry were furthest upstream,[10] while boats carrying dismounted cavalry crossed below them, with three or four horses in tow, tied to their boats. These took the brunt of the river's current and the mobile infantry in canoes were placed below them. Some soldiers may have crossed the river by swimming. Hannibal himself was among the first to cross, and the rest of the Carthaginian army assembled on the western bank to cheer their comrades while they waited their turn to cross.

The Gauls, seeing the boats being launched, massed on the eastern riverbank to oppose the Carthaginians. Battle was soon joined on the eastern shore and the Carthaginians managed to establish a foothold. Hanno, timing his attack, sent part of his force to set the Volcae camp on fire while the rest of his force fell on the rear of the Gallic army just as Hannibal’s group established a foothold. Some of the Gauls then moved to defend the camp, while some immediately took flight. Soon the whole enemy force was scattered and driven off.

The majority of the Carthaginian army crossed the river on the day of the battle using rafts, boats and canoes in relays. Hannibal took measures to have his elephants ferried across the river the following day by ingenious means. Either the elephants were ferried across on rafts covered by dirt, or they swam across. Once the army had gathered on the eastern bank, scouting parties were sent out, as Hannibal had received word that a Roman fleet had reached Massilia. One group of Numidians met a group of Roman and Gallic cavalry while scouting and retreated after a brief skirmish.

Publius Scipio had sailed from Pisa and reached Massilia after sailing five days along the Ligurian coast, and had disembarked his army there. Learning from the locals that Hannibal had already crossed into Gaul, he sent 300 Roman horsemen and some Gallic mercenaries up the east bank of the Rhône to locate the Carthaginian army. These troops met and scattered the aforementioned force of Numidian cavalry out scouting for Hannibal, and managed to locate the Carthaginian camp as well.

Scipio, after learning Hannibal's location, loaded his heavy baggage onto the ships and marched north with his army to confront Hannibal. Despite outnumbering Scipio at this point, Hannibal decided to push towards the Alps and started marching north following the eastern bank of the Rhone. Scipio arrived at the deserted Carthaginian camp, and finding that the Carthaginians were three days' march away, returned to Massilia. He put his army under the command of his brother Gnaeus Cornelius Scipio Calvus, then serving as his legate, and ordered him to sail for Iberia. Publius Scipio himself returned to Italy to organise the defences against Hannibal's anticipated invasion.

Historians disagree on the specific location of the battle site, identifying various locations starting from Bourg Saint-Andeoi (De Beer, 1969, p. 122-3), Beaucaire[11] and Fourques on the Rhone, based on different hypotheses. Polybius (3.42.1) identified the battle site as being four days march from the sea. Assuming a 12–16 kilometres (7.5–9.9 mi) march limit per day for the Carthaginian army, the site is likely between Avignon and Orange, upstream of the Durance river, based on the probable ancient coastline, which has advanced further south because of silting from the Rhône since 218 BC.[12]

Hannibal might have mobilized 137,000 (Hannibal’s army: 102,000 troops, Hasdrubal's 15,000, army in Africa: 20,000)[13] soldiers before setting out for Italy. After subduing the lands north of Ebro in Catalonia, Hannibal left Hanno there with 11,000 soldiers, and released another 10,000 troops from service. Hannibal’s army numbered 59,000 soldiers when he crossed the Pyrenees. It seems that 22,000 soldiers had vanished since crossing the Ebro, without any information being available about their specific fate. On the Rhône, Hannibal had 46,000 soldiers available; another 13,000 had disappeared although the army had fought no battles between the Pyrenees and the Rhône. When the Carthaginian army finally reached Italy, it supposedly numbered 26,000 (Polybius 3.56.4). The Punic army had lost 75% of its starting strength during the journey to Italy. The cause of this drastic reduction is speculated as: large scale desertion by new recruits,[14] high casualties suffered in Catalonia from direct assaults on walled towns,[15] garrisoning of parts of Gaul,[16] severe winter conditions faced on the Alps, and the unreliability of the figures given by Polybius.

Hans Delbruck proposed another hypothesis: Hannibal had mobilized a total of 82,000 troops, not 137,000. After leaving 26,000 in Iberia (with Hasdrubal Barca and Hanno), and releasing 10,000 prior to crossing the Pyrenees, he arrived in Italy with at least 34,000 soldiers.[17] The balance was lost in battles or to the Alpine elements. The basis of this theory is:

Given that Hannibal had at least 6,000 cavalry, 20,000 heavy infantry and 8,000 light infantry before the Gauls joined him, a total of 34,000 troops when he reached Italy. Which means that the Carthaginian army had still lost 25% of its starting strength on the march to Italy.