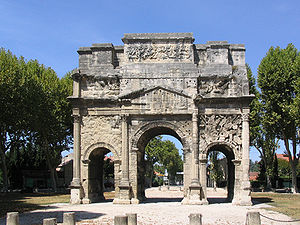 Orange (Provençal Occitan: Aurenja in classical norm or Aurenjo in Mistralian norm) is a commune in the Vaucluse Department in the Provence-Alpes-Côte d'Azur region in southeastern France. It is located about 21 km (13 mi) north of Avignon. It has a primarily agricultural economy.

Roman Orange was founded in 35 BC by veterans of the second legion[citation needed] as Arausio (after the local Celtic water god), or Colonia Julia Firma Secundanorum Arausio in full, "the Julian colony of Arausio established by the soldiers of the second legion." The name was originally unrelated to that of the orange fruit, but was later conflated with it (see Orange (word)).

A previous Celtic settlement with that name existed in the same place, and a major battle, which is generally known as the Battle of Arausio, had been fought in 105 BC between two Roman armies and the Cimbri and Teutones tribes.

Arausio covered an area of some 170 acres (69 ha) and was well endowed with civic monuments; in addition to the theatre and arch, it had a monumental temple complex and a forum.

It was the capital of a wide area of northern Provence, which was parcelled up into lots for the Roman colonists. "Orange of two thousand years ago was a miniature Rome, complete with many of the public buildings that would have been familiar to a citizen of the Roman Empire, except that the scale of the buildings had been reduced – a smaller theater to accommodate a smaller population, for example."[1]

The town prospered, but was sacked by the Visigoths in 412. It had, by then, become largely Christianized, and from the end of the third century constituted the Ancient Diocese of Orange. No longer a residential bishopric, Arausio, as it is called in Latin, is today listed by the Catholic Church as a titular see.[2] It hosted two important synods, in 441 and 529. The Second Council of Orange was of importance in condemning what later came to be called Semipelagianism.

When William the Silent, count of Nassau, with estates in the Netherlands, inherited the title Prince of Orange in 1544, the principality was incorporated into the holdings of what became the House of Orange-Nassau. This pitched it into the Protestant side in the Wars of Religion, during which the town was badly damaged. In 1568, the Eighty Years' War began with William as stadtholder leading the bid for independence from Spain. William the Silent was assassinated in Delft in 1584. His son, Maurice of Nassau (Prince of Orange after his elder brother died in 1618), with the help of Johan van Oldenbarnevelt, solidified the independence of the Dutch republic. The United Provinces survived to become the Netherlands, which is still ruled by the House of Orange-Nassau. William, Prince of Orange, ruled England as William III of England. Orange gave its name to other Dutch-influenced parts of the world, such as the Oranges (West Orange, South Orange, East Orange, Orange) in New Jersey, USA, and the Orange Free State in South Africa.

The city remained part of scattered Nassau holdings until it was captured by the forces of Louis XIV in 1672 during the Franco-Dutch War, again captured in August 1682 and was finally ceded to France in 1713 under the Treaty of Utrecht that ended the wars of Louis XIV. Following the French Revolution of 1789, Orange was absorbed into the French département of Drôme, then Bouches-du-Rhône, then finally Vaucluse. However, the title remained with the Dutch princes of Orange.

Orange attracted international attention in 1995, when it elected a member of Front National (FN), Jacques Bompard, as its mayor. Bompard left the FN in 2005 and became a member of the conservative Movement for France until 2010.

The town is renowned for its Roman architecture, and its Roman theatre, the Théâtre antique d'Orange, is described as the most impressive still existing in Europe. The fine Triumphal Arch of Orange is often said to date from the time of Augustus or Tiberius, but is probably much later, perhaps Severan.[3] The arch, theatre, and surroundings were listed in 1981 by UNESCO as a World Heritage Site.

The Musée (Museum) displays the biggest (7.56 x 5.90 m) cadastral Roman maps ever recovered, etched on marble. They cover the area between Orange, Nîmes, and Montélimar.

In 1869, the Roman theatre was restored and has been the site of a music festival. The festival, given the name Chorégies d'Orange in 1902, has been held annually ever since, and is now famous as an international opera festival.

In 1971, the "New Chorégies" were started and became an overnight, international success.[citation needed] Many top international opera singers have performed in the theatre, such as Barbara Hendricks, Plácido Domingo, Montserrat Caballé, Roberto Alagna, René Pape and Inva Mula. Operas such as Tosca, Aida, Faust, and Carmen have been staged here, many with a sumptuous staging and also receiving outstanding acclaim.

The Roman theatre is one of three heritage sites at which the Roman wall remains.

Orange is twinned with:

It is also member of the Association of Orange cities, together with:

Orange features a humid subtropical climate (Cfa), with just too much rainfall in summer to have a 'Mediterranean' (Csa) classification. Summers are hot and relatively dry. Most rainfall occurs in spring and autumn, though with gentle temperatures. Winters are mild, but harsh frost and snow are not unheard of.[5]