Batumi (Georgian: ბათუმი, formerly known as Batum) is a seaside city on the Black Sea coast and capital of Adjara, an autonomous republic in southwest Georgia. With a population of 154,100,[1] Batumi serves as an important port and a commercial center. It is situated in a subtropical zone, rich in agricultural produce such as citrus fruit and tea. While industries of the city include shipbuilding, food processing, and light manufacturing, most of its economy revolves around tourism. Since 2010, the face of the city has been transformed by the construction of new high-rise landmark buildings and the renovation of the Old Town.[3]

Batumi is located on the site of the ancient Greek colony in Colchis called Bathus or Bathys – derived from the Greek phrase βαθύς λιμεν bathus limen or βαθύς λιμήν bathys limin meaning "deep harbour". Under Hadrian (r. 117–138 AD), it was converted into a fortified Roman port and later deserted for the fortress of Petra founded in the time of Justinian I (r. 527–565). Garrisoned by the Roman-Byzantine forces, it was formally a possession of the kingdom of Lazica until being occupied briefly by the Arabs, who did not hold it; in the 9th century it formed part of the Bagratid monarchy of Tao-Klarjeti and at the close of the 10th century of the unified kingdom of Georgia which succeeded it.

From 1010, it was governed by the eristavi (viceroy) of the king of Georgia. In the late 15th century, after the disintegration of the Georgian kingdom, Batumi passed to the princes (mtavari) of Guria, a western Georgian principality under the sovereignty of the kings of Imereti.

A curious incident occurred in 1444 when a Burgundian flotilla, after a failed crusade against the Ottoman Empire, penetrated the Black Sea and engaged in piracy along its eastern coastline until the Burgundians under the knight Geoffroy de Thoisy were ambushed while landing to raid Vaty, as Europeans then knew Batumi. De Thoisy was taken captive and released through the mediation of the emperor John IV of Trebizond.

In the 15th century in the reign of the prince Kakhaber Gurieli, the Ottoman Turks conquered the town and its district but did not hold them. They returned to it in force a century later and inflicted a decisive defeat on the Georgian armies at Sokhoista. Batumi was recaptured by the Georgians several times, first in 1564 by prince Rostom Gurieli, who lost it soon afterwards, and again in 1609 by Mamia Gurieli. In 1723 Batumi again became part of the Ottoman Empire. With the Turkish conquest, the Islamisation of the hitherto Christian region began, but terminated and to a great degree reversed, after the area was re-annexed to Russian Imperial Georgia after the Russo-Turkish War of 1877–78. 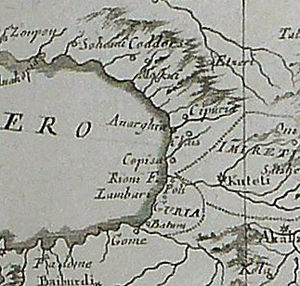 Detail from a map of Antonio Zatta, 1784, depicting Georgian principality of Guria and its major town Batumi. 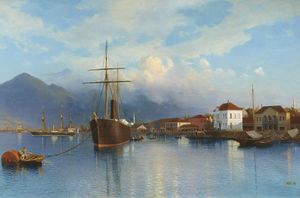 It was the last Black Sea port annexed by Russia during the Russian conquest of that area of the Caucasus. In 1878, Batumi was annexed by the Russian Empire in accordance with the Treaty of San Stefano between Russia and the Ottoman Empire (ratified on March 23) . Occupied by the Russians on August 28, 1878, the town was declared a free port until 1886. It functioned as the center of a special military district until being incorporated in the Government of Kutaisi on June 12, 1883. Finally, on June 1, 1903, with the Okrug of Artvin, it was established as the region (oblast) of Batumi and placed under the direct control of the General Government of Georgia.

The expansion of Batumi began in 1883 with the construction of the Batumi-Tiflis-Baku railway (completed in 1900) and the finishing of the Baku-Batumi pipe-line. Henceforth, Batumi became the chief Russian oil port in the Black Sea. The town expanded to an extraordinary extent and the population increased rapidly: from 8,671 inhabitants in 1882 to 12,000 in 1889. By 1902 the population had reached 16,000, with 1,000 working in the refinery for Baron Rothschild's Caspian and Black Sea oil company.[4]

In the late 1880s and after, more than 7400 Doukhobor emigrants sailed for Canada from Batumi, after the government agreed to let them emigrate. Quakers and Tolstoyans aided in collecting funds for the relocation of the religious minority, which had come into conflict with the Imperial government over its refusal to serve in the military and other positions. Canada settled them in Manitoba and Saskatchewan.

During 1901, sixteen years prior to the October Revolution, Joseph Stalin, the future leader of the Soviet Union, lived in the city organizing strikes. On March 3, 1918, the Treaty of Brest-Litovsk gave the city back to the Ottoman Empire; unrest during the closing weeks of World War I led to the re-entry of Turkish forces in April 1918, followed in December by British forces, who stayed until July 1920. Kemal Atatürk ceded the area to the Bolsheviks of the Soviet Union on the condition that it be granted autonomy, for the sake of the Muslims among Batumi's mixed population.

When the USSR collapsed in 1989, Aslan Abashidze was appointed head of Adjara's governing council and subsequently held onto power throughout the unrest of the 1990s. Whilst other regions, such as Abkhazia, attempted to break away from the Georgian state, Adjara remained as an integral part of the Republic's territory. Abashidze exploited the central government's weaknesses and ruled the area as a personal fiefdom. In May 2004, he fled to Russia because of mass protests in Tbilisi sparked by the Rose Revolution. 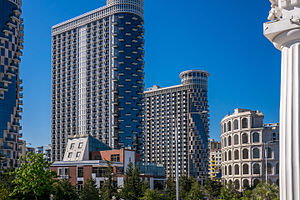 Batumi today is one of the main port cities of Georgia. It has the capacity for 80,000-tonne tankers to take materials such as oil that are shipped through Georgia from Central Asia. Additionally, the city exports regional agricultural products. Since 1995 the freight conversion of the port has constantly risen, with an approximate 8 million tonnes in 2001. The annual revenue from the port is estimated at between $200 million and $300 million.

Since the change of power in Adjara, Batumi has attracted international investors, and the prices of real estate in the city have trebled since 2001. In July 2007, the seat of the Constitutional Court of Georgia was moved from Tbilisi to Batumi to stimulate regional development.[5] Several new hotels opened after 2009, first the Sheraton in 2010 and the Radisson Blu in 2011. The Trump Tower and the Kempinski was scheduled to open in 2013[clarification needed].

Batumi was host to the Russian 12th Military Base. Following the Rose Revolution, the central government pushed for the removal of these forces, and reached agreement in 2005 with Moscow. According to the agreement, the process of withdrawal was planned to be completed in 2008, but the Russians completed the transfer of the Batumi base to Georgia on November 13, 2007, ahead of schedule.[6]

In 2013, TAM GEO LLC announced it was investing $70 million to start construction of the 170- meter, 45-storey mix-use complex Babillon Tower, which will be tallest residential building in Georgia.[7] 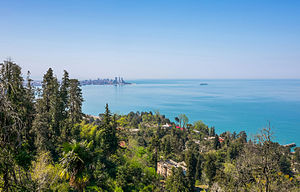 Coast of Batumi as seen from a nearby cliff

Batumi lies at the southern periphery of the oceanic climate, but it is classified as "Cfa" according to Köppen's classification. The city's climate is heavily influenced by the onshore flow from the Black Sea and is subject to the orographic effect of the nearby hills and mountains, resulting in significant rainfall throughout most of the year, making Batumi the wettest city in both Georgia and the entire Caucasus Region.

Batumi's average annual precipitation is 2,718 mm (107.0 in). September is the wettest month with an average of 335 mm (13.2 in) of precipitation, while May is the driest, averaging 92 mm (3.6 in). Batumi generally does not receive significant amounts of snow (accumulating snowfall of more than 30 cm (11.8 in)), and the number of days with snow cover for the year is 12. The average level of relative humidity ranges from 70–80%. 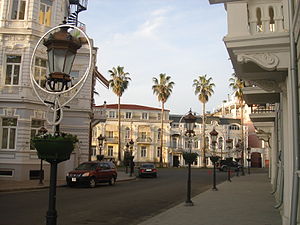 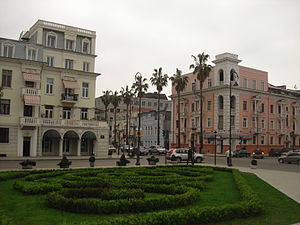 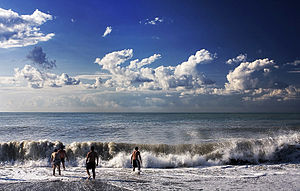 Batumi's skyline has been transformed since 2007 with remarkable buildings and monuments of contemporary architecture,[3] including:[10]

A large Kempinski hotel and casino is to open in 2013, a Hilton Hotel as well as a 47-storey Trump Tower is also planned.[11]

The city is served by Batumi Airport, one of three international airports in the country. A bike-sharing scheme named BatumVelo allows you to rent a bicycle on the street with a smart card.

According to the March 31, 2008 decision of the Batumi City Council, Batumi is divided into seven boroughs, those of: 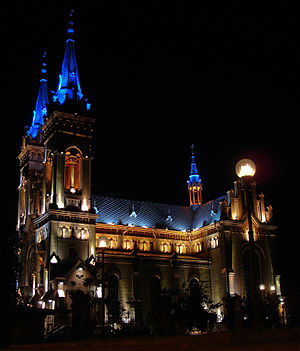 Georgian Orthodox (former Catholic) Cathedral of the Mother of God

While there is a Sunni Muslim minority, the majority of the inhabitants belong to the Georgian Orthodox Church. Batumi is also home to Eastern Orthodox Christian, Muslim, Catholic, Armenian Apostolic, and Jewish communities. The places of worship in the city are: 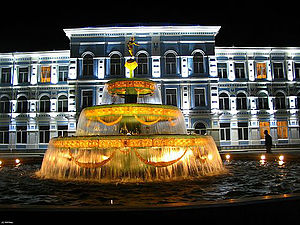 Notable people who are from or have resided in Batumi: