From Infogalactic: the planetary knowledge core
Jump to: navigation, search
For the Slavic god, see Veles (god). For the steamship, see SS Volos.

Volos (Greek: Βόλος) is a coastal port city in Thessaly situated midway on the Greek mainland, about 326 kilometres (203 miles) north of Athens and 215 kilometres (134 miles) south of Thessaloniki. It is the capital of the Magnesia regional unit. Volos is the only outlet to the sea from Thessaly, the country's largest agricultural region. With a population of 144,449 (2011), it is an important industrial centre, while its port provides a bridge between Europe, the Middle East and Asia.

Volos is the newest of the Greek port cities, with a large proportion of modern buildings erected following the catastrophic earthquakes of 1955. It includes the municipal units of Volos, Nea Ionia and Iolkos, as well as smaller suburban communities. The economy of the city is based on manufacturing, trade, services and tourism. Home to the University of Thessaly, the city also offers facilities for conferences, exhibitions and major sporting, cultural and scientific events. Volos participated in the 2004 Olympic Games, and the city has since played host to other athletic events, such as the European Athletic Championships. Volos hosted the 7th International Olympiad on Astronomy and Astrophysics from 27 July to 5 August 2013.[2]

Built at the innermost point of the Pagasetic Gulf and at the foot of Mount Pilio (Pelion, the land of the Centaurs). The city spreads in the plain on the foothills of Mount Pelion, bordering the town of Agria to the east and Nea Anchialos to the south west. Volos' municipality includes both towns, along with many nearby villages, including Makrinitsa and Portaria.

Volos is the third largest[citation needed] major commercial port of mainland Greece in the Aegean sea (after Piraeus and Thessaloniki), with connection by ferry and hydrofoil to the nearby Sporades Islands, which include Skiathos, Skopelos and Alonissos. There are also connections to Limnos, Lesvos, Chios and Skyros. 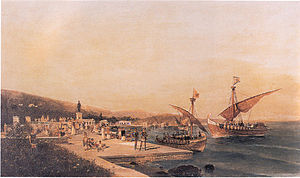 Modern Volos is built on the area of the ancient cities of Demetrias, Pagasae and Iolcos. Demetrias was established by Demetrius Poliorcetes, King of Macedon. Iolkos, Iolcos or Iolcus, was the homeland of mythological hero Jason, who boarded the ship Argo accompanied by the Argonauts and sailed in quest of the Golden Fleece to Colchis. To the west of Volos lie the Neolithic settlements of Dimini, with a ruined acropolis, walls, and two beehive tombs dating to between 4000-1200 BC, Sesklo, with the remains of the oldest acropolis in Greece (6000 BC), and also the foundations of a palace and mansions[clarification needed], among its most characteristic examples of Neolithic civilisation. Mycenaean settlements have also been discovered in Volos unearthing, at the Kastron of Palaia Hill, tablets bearing Mycenaean Greek inscriptions, written in Linear B.[citation needed]

According to a Byzantine historian of the 14th century, Volos was known as "Golos" (Greek: "Γόλος"). The most widely accepted theory for the derivation of the city's name suggests that Volos is a corruption of the Mycenaean Iolkos, which had become distorted through the ages to become "Golkos", later "Golos", and subsequently "Volos".[citation needed] Others contend that the name originates with Folos, who according to myth was a wealthy landlord of the region. It was conquered by Stefan Dusan, was king of Serbia in 1348 and was managed for 25 years. Volos returned to Byzantine rule in 1373 but was conquered by Ottomans in 1393.[citation needed]

The city marked a Southern border of Vilayet-i Rumeli-i Şarki in the Ottoman Empire, known then as "Golos". Since the early stages of the Greek Revolution, the provisional government of Greece claimed Volos as part of Greek national territory, but the Treaty of Constantinople (1832), which established a Greek independent state, set its northern boundary between Arta and Volos.[3] 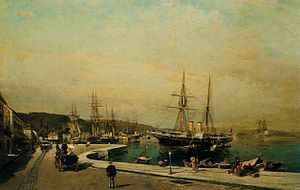 The port of Volos by Constantine Volanakis (c.1875). 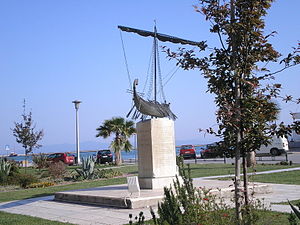 Modern sculpture of Argo, the mythic ship of the Argonauts, at the port. 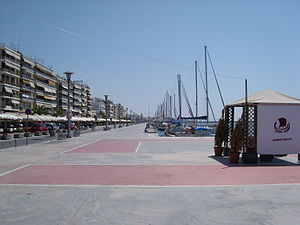 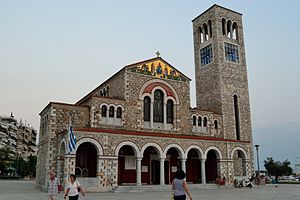 The church of Saints Constantine and Helen at the seafront.

Volos is a relatively new city, beginning its strongest growth in the mid-19th century.[citation needed] The locality of its castle was previously known as Golos by Ottomans and locals, while Ano Volos was known as Gkolos.[citation needed]

After its incorporation into the Greek Kingdom from the Ottoman Empire in 1881, the town had a population of only 4,900, but grew rapidly in the next four decades as merchants, businessmen, craftsmen and sailors gravitated toward it from the surrounding area. In the 1920s a large influx of refugees to the settlement took place, especially from Ionia, but also from Pontus, Cappadocia and Eastern Thrace. In 1882, Andreas Syngros established the Privileged Bank of Epirus and Thessaly, which the National Bank of Greece acquired in 1899 after its founder's death. Volos was occupied by Ottomans on 8 May 1897, during the Greco Turkish War.[4]

The city had a vibrant Jewish community in the early 20th century: from ca. 500 in 1896, it rose to ca. 2,000 in 1930, before falling drastically to 882 members in 1940, because of emigration to the great cities of Thessaloniki and Athens or abroad. During the Axis occupation of Greece, the prompt actions of the local chief rabbi, Moshe Pessach, and the Greek authorities, saved about 700 of the local Jewish community from deportation to the Nazi death camps.[5]

Volos is also well known for its assortment of mezedes and a clear, alcoholic beverage known as tsipouro.

A street in a sister city, Rostov-on-Don, bears the name Улица Греческого Города Волос (Street of the Greek City of Volos), weaving through a mix of early 20th century buildings with characteristic inner yards, tiered balconies and open iron stairs that lend the old Rostov its characteristic Mediterranean look.

The municipality Volos was formed at the 2011 local government reform by the merger of the following 9 former municipalities, that became municipal units:[6]

The province of Volos (Greek: Επαρχία Βόλου) was one of the provinces of the Magnesia Prefecture. Its territory corresponded with that of the current municipalities Volos, Rigas Feraios, South Pelion and Zagora-Mouresi.[7] It was abolished in 2006. 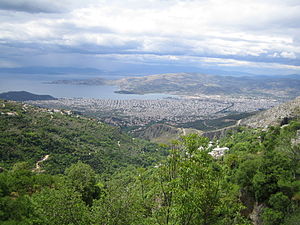 Volos is the administrative centre of the Magnesia regional unit. Many of the city domains are separated through natural barricades, such as rivers.

Three main rivers/mountain torrents all rise from mount Pelion (with its peak at 1,610 metres (5,280 feet)), crossing the city to create a unique urban geography, before ending in the Pagasetic Gulf flowing west. The Anavros river, famous for Jason's pass, divides the Nea Demetriada district from the rest of the urban area. Krausidonas is the major river passing through the city, and constitutes the natural lung of the urbanized area of Volos, as well as the boundary between the major municipalities of the metropolitan city, the municipalities of Volos and Nea Ionia. Xirias (Ξηριάς), is the largest torrent of the metropolitan urban area of Volos, and passes through the Nea Ionia municipal area.

Volos, having a Mediterranean climate, typically experiences neither particularly high nor extremely low temperatures throughout the year. Its climate is one of a low humidity, favourable for all kinds of activities. The Pelion mountain, with its own microclimate, affects the city's weather.[citation needed] 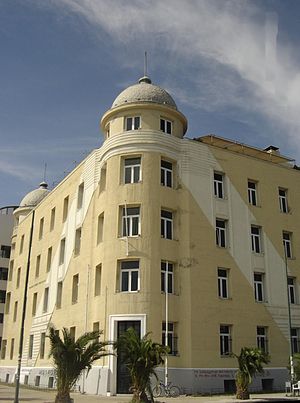 The administrative building of the University of Thessaly. 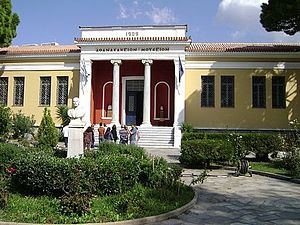 The Archaeological Museum of Volos. 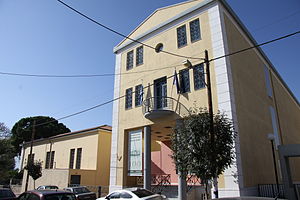 The new building of the archaeological museum.

The development of the new city coincided with the flourishing of neoclassicism. Public buildings conformed to this style and prestigious private buildings belonging to prosperous merchants were particularly sophisticated. Typical examples include:

There are many school units in Volos. The conurbation is obliged by 56 kindergartens, 51 primary schools, 18 junior high schools and 13 senior high schools.[citation needed] Also, there is the University of Thessaly, which is housed in Volos. 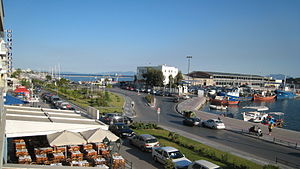 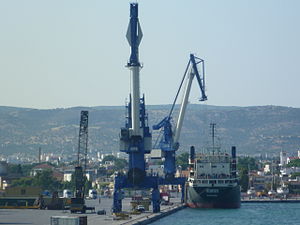 Cargo ship at the harbour.

Volos is one of the most industrialized provincial cities of Greece, because of its strategic location between the largest population centers of the country (Athens - Thessaloníki) and its port. Industry is intensely specialized in steel production and manufacturing, and METKA has two large factories in the industrial area of Volos, while large factories of SIDENOR - a steel producer - operate in close proximity from the nearby city of Almyros. Hellenic Steel industry (Ελληνική Χαλυβουργία) also has production facilities in Volos, and AGET - Hraklis, a member of the Lafarge group, operates one of the largest cement facilities in the world (with capacity exceeding 7,000,000tn[9]) with its own private port, next to the city. Volos is also active in the research sector, hosting the CERETETH. 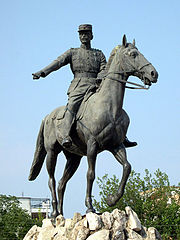 The city of Volos has always had a major role in the financial, economic, commercial and administrative matters of the region of Thessaly and Central Greece, due to the strategic position of the city's port, unique between Athens and Thessaloniki.

Several European countries have established consulates in Volos including:

Volos is twinned with: 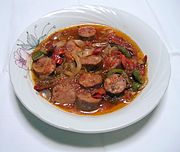 Spetsofai, traditional dish with country sausage, onion, peppers and tomato, originating from the region of Pelion.

Volos is a candidate city for the European Capital of Culture in 2021.[12] 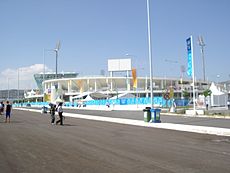 Volos has many clubs in several sport. The most popular, with successes in football, are Olympiakos Volou and Niki Volou. The main clubs of Volos are shown below.

All land transport reaches Volos, while the International Airport of Central Greece in Nea Anchialos links the city to international destinations, and the Port of Volos provides links to the islands, mostly the Sporades, as well as to some destinations in Pilio.

Volos is linked through Greece's E75 Highway Axis (most often known as PATHE) with Northern and Southern Greece. Beyond this, the Axis E65 will be the gateway to Western Greece and the port of Igoumenitsa, through the plains of inner Thessaly; this part of the E65 motorway will be completed by 2012.

The city of Volos, along with the rest of Central Greece, is linked to the rest of Greece and Europe by the Nea Anchialos National Airport. The airport represents the biggest air lane in Greece after Eleftherios Venizelos.

Volos is the first city in Europe to feature Seaplane Services[citation needed] through Argo Airways, which is based in Volos. The seaplanes connect Volos with Skiathos, Skopelos, Allonisos, Athens and Thessaloniki. 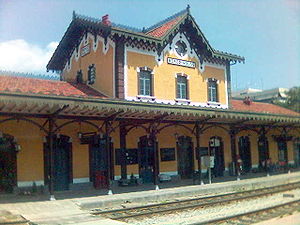 Volos' railway station building was designed by Evaristo De Chirico soon after the liberation of Central Greece. Part of the station still functions in this picturesque 1884 structure, reminiscent of a stately home to some. The adjacent neoclassical building, built between 1900 and 1903 under Evaristo De Chirico, served as the administrative headquarters of the Thessaly Railways.

Today, the city is served by direct lines to the rest of Greece, and the railway complex houses facilities for train maintenance. Volos is directly linked with Athens once per day, with Thessaloniki twice per day, and with Larissa 15 times a day. In the past Volos was served by railway lines of three different gauges, the metre gauge line of Thessaly Railways to Kalampaka, the standard gauge line to Larissa and the 600 mm (1 ft 11 5⁄8 in) gauge line to Pelion. Remnants of triple gauge lines still exist near the station.