Bennett Lester "Benny" Carter (August 8, 1907 – July 12, 2003) was an American jazz alto saxophonist, clarinetist, trumpeter, composer, arranger, and bandleader. He was a major figure in jazz from the 1930s to the 1990s, and was recognized as such by other jazz musicians who called him King. Carter performed with major artists from several generations of jazz, and at major festivals, such as his 1958 appearance with Billie Holiday at the Monterey Jazz Festival.

The National Endowment for the Arts honored Benny Carter with its highest honor in jazz, the NEA Jazz Masters Award for 1986.[1] He was awarded the Grammy Lifetime Achievement Award in 1987, and both won a Grammy Award for his solo "Prelude to a Kiss" and received a star on the Hollywood Walk of Fame in 1994.[2] In 2000 awarded the National Endowment for the Arts, National Medal of Arts, presented by President Bill Clinton.[3][4]

Born in New York City in 1907, the youngest of six children and the only boy, received his first music lessons on piano from his mother. Largely self-taught, by age fifteen, Carter was already sitting in at Harlem night spots. From 1924 to 1928, Carter gained professional experience as a sideman in some of New York's most prominent bands. As a youth, Carter lived in Harlem around the corner from Bubber Miley, who was Duke Ellington's featured trumpeter. Carter was inspired by Miley and bought a trumpet, but when he found he couldn't play like Miley, he traded the trumpet in for a saxophone. For the next two years, he played with jazz musicians including cornetist Rex Stewart, clarinetist-soprano saxophonist Sidney Bechet, pianists Earl Hines, Willie "The Lion" Smith, pianist Fats Waller, pianist James P. Johnson, pianist Duke Ellington, and their respective groups. 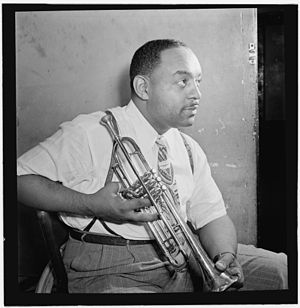 He first recorded in 1928 with Charlie Johnson's Orchestra, also arranging the titles recorded, and formed his first big band the following year. He played with Fletcher Henderson in 1930 and 1931, becoming his chief arranger in this time, then briefly led the Detroit-based McKinney's Cotton Pickers[5] before returning to New York in 1932 to lead his own band, which included such swing musicians as Leon "Chu" Berry (tenor saxophone), Teddy Wilson (piano), Sid Catlett (drums), and Dicky Wells (trombone). Carter's arrangements were sophisticated and very complex, and a number of them became swing standards which were performed by other bands ("Blue Lou" is a great example of this). He also arranged for Duke Ellington during these years. Carter was noted for his arrangements. Among the most significant are "Keep a Song in Your Soul", written for Fletcher Henderson in 1930, and "Lonesome Nights" and "Symphony in Riffs" from 1933, both of which show Carter's fluid writing for saxophones.[6] By the early 1930s he and Johnny Hodges were considered the leading alto players of the day. Carter also quickly became a leading trumpet soloist, having rediscovered the instrument. He recorded extensively on trumpet in the 1930s. Carter's name first appeared on records with a 1932 Crown label release of "Tell All Your Day Dreams to Me" credited to Bennie Carter and his Harlemites. Carter's short-lived Orchestra played the Harlem Club in New York but only recorded a handful of records for Columbia, OKeh and Vocalion. The OKeh sides were issued under the name Chocolate Dandies. His trumpet solo on the October 1933 recording of "Once Upon A Time" by the Chocolate Dandies (OKeh 41568 and subsequently reissued on Decca 18255 and Hot Record Society 16) has long been considered[by whom?] a milestone solo achievement.

In 1933 Carter took part in a series of sessions that featured the British band leader Spike Hughes, who went to New York specifically to organize a series of recordings featuring prominent African American musicians. These 14 sides plus four by Carter's big band were only issued in England at the time, originally titled Spike Hughes and His Negro Orchestra. The musicians were mainly made up from members of Carter's band. The bands (14–15 pieces) include such major players as Henry "Red" Allen (trumpet), Dicky Wells (trombone), Wayman Carver (flute), Coleman Hawkins (saxophone), J.C. Higginbotham (trombone), and Leon "Chu" Berry (saxophone),[7] tracks include: "Nocturne", "Someone Stole Gabriel's Horn", "Pastorale", "Bugle Call Rag", "Arabesque", "Fanfare", "Sweet Sorrow Blues", "Music at Midnight", "Sweet Sue Just You", "Air in D Flat", "Donegal Cradle Song", "Firebird", "Music at Sunrise", and "How Come You Do Me Like You Do".

Carter moved to Europe in 1935 to play trumpet with Willie Lewis's orchestra, and also became staff arranger for the British Broadcasting Corporation dance orchestra and made several records. Over the next three years, he traveled throughout Europe, playing and recording with prominent British, French, and Scandinavian jazzmen, as well as with visiting American musicians such as his friend Coleman Hawkins. Two recordings that typify his sound are 1937's "Honeysuckle Rose," recorded with Django Reinhardt and Coleman Hawkins in Europe, and the same tune revisited on his 1961 album Further Definitions.

Return to Harlem and a move to Los Angeles

Returning home in 1938, he quickly formed another orchestra, which spent much of 1939 and 1940 at Harlem's famed Savoy Ballroom. His arrangements were much in demand and were featured on recordings by Benny Goodman, Count Basie, Duke Ellington, Lena Horne, Glenn Miller, Gene Krupa, and Tommy Dorsey. Though he only had one major hit in the big band era (a novelty song called "Cow-Cow Boogie," sung by Ella Mae Morse), during the 1930s Carter composed and/or arranged many of the pieces that became swing era standards, such as "When Lights Are Low," "Blues in My Heart," and "Lonesome Nights."

He relocated to Los Angeles in 1943, and moved increasingly into studio work. Beginning with Stormy Weather in 1943, he arranged for dozens of feature films and television productions.[8] In Hollywood, he wrote arrangements for such artists as Billie Holiday, Sarah Vaughan, Billy Eckstine, Pearl Bailey, Ray Charles, Peggy Lee, Lou Rawls, Louis Armstrong, Freddie Slack and Mel Torme. In 1945, trumpeter Miles Davis made his first recordings with Carter as sideman on album Benny Carter and His Orchestra,[9] and considered him a close friend and mentor. Carter was one of the first black men to compose music for films. He was an inspiration and a mentor for Quincy Jones when Jones began writing for television and films in the 1960s. Carter's successful legal battles in order to obtain housing in then-exclusive neighborhoods in the Los Angeles area made him a pioneer in an entirely different area.

Benny Carter visited Australia in 1960 with his own quartet, performed at the 1968 Newport Jazz Festival with Dizzy Gillespie, and recorded with a Scandinavian band in Switzerland the same year. His studio work in the 1960s included arranging and sometimes performing on Peggy Lee's Mink Jazz, (1962) and on the single "I'm A Woman" in the same year. 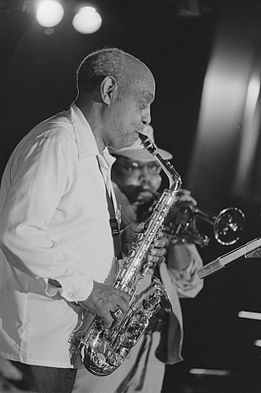 In 1969, Carter was persuaded by Morroe Berger, a sociology professor at Princeton University who had done his master's thesis on jazz, to spend a weekend at the college as part of some classes, seminars, and a concert. This led to a new outlet for Carter's talent: teaching. For the next nine years he visited Princeton five times, most of them brief stays except for one in 1973 when he spent a semester there as a visiting professor. In 1974 Princeton awarded him an honorary master of humanities degree. He conducted workshops and seminars at several other universities and was a visiting lecturer at Harvard for a week in 1987. Morroe Berger also wrote the book Benny Carter – A Life in American Music (1982), a two-volume work, covers Carter's career in depth, an essential work of jazz scholarship.[10]

In the late summer of 1989 the Classical Jazz series of concerts at New York's Lincoln Center celebrated Carter's 82nd birthday with a set of his songs, sung by Ernestine Anderson and Sylvia Syms. In the same week, at the Chicago Jazz Festival, he presented a recreation of his Further Definitions album, using some of the original musicians. In February 1990, Carter led an all-star big band at the Lincoln Center in a concert tribute to Ella Fitzgerald. Carter was a member of the music advisory panel of the National Endowment for the Arts. In 1990, Carter was named "Jazz Artist of the Year" in both the Down Beat[11] and Jazz Times International Critics' polls. In 1978, he was inducted into the Black Filmmakers Hall of Fame[12] and in 1980 received the Golden Score award of the American Society of Music Arrangers. Carter was also a Kennedy Center Honoree in 1996, and received honorary doctorates from Princeton (1974),[13] Rutgers (1991),[14] Harvard (1994), and the New England Conservatory (1998).[15]

Carter had an unusually long career, and was perhaps the only musician to have recorded in eight different decades.[16] Having started a career in music before music was electronically recorded, Carter remained a musician, arranger and composer until he retired from performing in 1997. In 1998, Benny Carter was honored at Third Annual Awards Gala and Concert at Lincoln Center. He received the Jazz at Lincoln Center Award for Artistic Excellence and his music was performed by the Lincoln Center Jazz Orchestra with Wynton Marsalis, Diana Krall and Bobby Short. Wynton accepted on Carter's behalf. (Back trouble prevented Carter from attending.)[citation needed]

Carter died in Los Angeles, at Cedars-Sinai Medical Center July 12, 2003 from complications of bronchitis at the age of 95. In 1979, he married Hilma Ollila Arons, who survived him, along with a daughter, a granddaughter and a grandson.[17][18]

Inducted into the Downbeat Jazz Hall of Fame, 1977.