From Infogalactic: the planetary knowledge core
(Redirected from Berenice (port))
Jump to: navigation, search
This article is about the Egyptian town. For other uses, see Berenice (disambiguation).

Berenice (Berenike) or Berenice Troglodytica (Greek: Βερενίκη), also known as Baranis and now known as Medinet-el Haras,[citation needed] is an ancient seaport of Egypt on the west coast of the Red Sea. It is situated about 825 km south of Suez and 260 km east of Aswan.[2]

It was founded in 275 BC by Ptolemy II (Philadelphos) (285 BC—246 BC), who named it after his mother, Berenice I of Egypt.[3] Troglodytica refers to the aboriginal people of the region, the "Troglodytai" or "cave dwellers". Although the name is attested by several ancient writers, the more ancient Ptolemaic inscriptions read Trogodytai (which G.W.B. Huntingford has speculated could be related to the same root as Tuareg). It is possible that later copyists confused this name with the more common term Troglodytai.

Built at the head of a gulf, the Sinus Immundus, or Foul Bay, of Strabo, it was sheltered on the north by Ras Benas (Lepte Extrema). A lofty range of mountains runs along this side of the African coast, and separates Berenice from the Nile Valley. The emerald mines of Zabara and Saket are in its neighbourhood. The harbour is indifferent, but was improved by art. Berenice stood upon a narrow rim of shore between the hills and the Red Sea. The harbor of Berenice was sheltered from the northeast wind by the island Ophiodes (Ὀφιώδης νήσος, Strabo xvi. p. 770; Diod. iii. 39), which was rich in topazes.

Berenice was quite famous and prosperous in antiquity. The city is noted by most ancient geographers, including Strabo, Pliny the Elder (vi. 23, 26, 29, 33), and Stephanus of Byzantium (s. v.). Its prosperity after the third century was owing in great measure to three causes: the favour of the Macedonian kings, its safe anchorage, and its being a terminus of the great road from Coptos (now Qift) on the Nile, which rendered Berenice and Myos Hormos the two principal emporia of the trade between Aethiopia and Egypt on the one hand, and Syria and Tamilakkam on the other. The road across the desert from Coptos was 258 Roman miles long, or eleven days' journey. The road was provided with watering stations (Greek hydreumata, see Hadhramaut); the wells and halting places of the caravans are enumerated by Pliny (vi. 23. s. 26), and in the Itineraries (Antonin. p. 172, f.). Belzoni (Travels, vol. ii. p. 35) found traces of several of these stations.

From the 1st century BC until the 2nd century AD Berenice was one of the trans-shipping points of trade between India, Arabia, and Upper Egypt. It was connected to Antinopolis on the River Nile in Lower Egypt by the Via Hadriana in 137. The coastal trade from Berenice along the coast of the Indian Ocean is described in the anonymous 1st century AD handbook Periplus of the Erythraean Sea. In the 4th century Berenice again become an active port, but after the 6th century the port was abandoned. Under the Roman Empire, Berenice formed a district in itself, with its peculiar prefect, who was entitled Praefectus Berenicidis, or P. montis Berenicidis. (Orelli, Inscr. Lat. no. 3880, f.)

In 1818 the ruins of Berenice were identified by Giovanni Battista Belzoni, confirming an earlier opinion of D'Anville. Since then, several excavations have been undertaken. The port is now nearly filled up, has a sand-bar at its entrance and can be reached only by small craft.[4] Most important of the ruins is a temple; the remnants of its sculptures and inscriptions preserve the name of Tiberius and the figures of many deities, including a (goddess?) Alabarch or Arabarch, also the name of the head magistrate of the Jews in Alexandria under Ptolemaic and Roman rule. The temple is of sandstone and soft calcareous stone, in the Egyptian style. It is 102 feet (31 m) long, and 43 wide. A portion of its walls is sculptured with well-executed basso relieves, of Greek workmanship, and hieroglyphics also occasionally occur on the walls. Belzoni said that the city measured 1,600 feet (490 m) from north to south, and 2,000 from east to west. He estimated the ancient population at 10,000. (Researches, vol. ii. p. 73.) 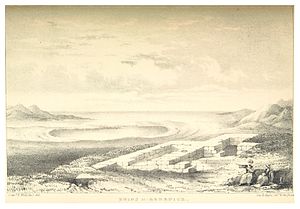 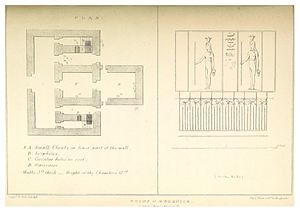 A large number of significant finds have been made providing evidence of the cargo from the Malabar Coast and the presence of Tamil people from South India and Jaffna being at this last outpost of the Roman Empire.

"Among the unexpected discoveries at Berenike were a range of ancient Indian goods, including the largest single concentration (7.55 kg) of black peppercorns ever recovered in the classical Mediterranean world (“imported from southern India” and found inside a large vessel made of Nile silt in a temple courtyard); substantial quantities of Indian-made fine ware and kitchen cooking ware and Indian style pottery; Indian-made sail cloth, basketry, matting, etc. from trash dumps; a large quantity of teak wood, black pepper, coconuts, beads made of precious and semi-precious stones, cameo blanks; “a Tamil Brahmi graffito mentioning Korra, a South Indian chieftain”; evidence that “inhabitants from Tamil South India (which then included most of Kerala) were living in Berenike, at least in the early Roman period”; evidence that the Tamil population implied the probable presence of Buddhist worshippers; evidence of Indians at another Roman port 300 km north of Berenike; Indian-made ceramics on the Nile road; a rock inscription mentioning an Indian passing through en route; “abundant evidence for the use of ships built and rigged in India”; and proof “that teak wood (endemic to South India), found in buildings in Berenike, had clearly been reused”(from dismantled ships)."[6]

In 2009 the first find of frankincense was reported and "two blocks of resin from the Syrian fir tree (Abies cilicica), one weighting about 190 g and the other about 339 g, recovered from 1st-century AD contexts in one of the harbor trenches. Produced in areas of greater Syria and Asia Minor, this resin and its oil derivative were used in mummification, as an antiseptic, a diuretic, to treat wrinkles, extract worms and promote hair growth."[7]