From Infogalactic: the planetary knowledge core
Jump to: navigation, search
For the city in Mississippi, see Belzoni, Mississippi. 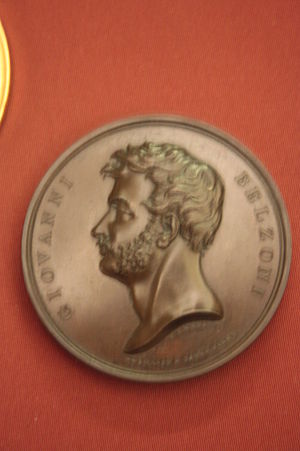 Giovanni Battista Belzoni (Italian pronunciation: [dʒoˈvanni batˈtista belˈtsoːni]; 5 November 1778 – 3 December 1823), sometimes known as The Great Belzoni, was a prolific Italian explorer and pioneer archaeologist of Egyptian antiquities. He is known for his removal to England of the seven ton bust of Ramesses II, the clearing of sand from the entrance of the great temple at Abu Simbel, the discovery and documentation of the tomb of Seti I (still sometimes known as "Belzoni's Tomb"), and the first to penetrate into the second pyramid of Giza.

Belzoni was born in Padua. His father was a barber who sired fourteen children. His family was from Rome and when Belzoni was 16 he went to work there, saying that he studied hydraulics. He intended taking monastic vows, but in 1798 the occupation of the city by French troops drove him from Rome and changed his proposed career. In 1800 he moved to the Netherlands where he earned a living as a barber.

In 1803 he fled to England to avoid being sent to jail.[2] There he married an Englishwoman, Sarah Bane. Belzoni was a tall man at 6 feet 7 inches (2.01 m) tall (one source says that his wife was of equally generous build, but all other accounts of her describe her as being of normal build) and they both joined a travelling circus.[3] They were for some time compelled to find subsistence by performing exhibitions of feats of strength and agility as a strongman at fairs and on the streets of London. In 1804 he appears engaged at the circus at Astley's amphitheatre at a variety of performances.[4] Belzoni had an interest in phantasmagoria and experimented with the use of magic lanterns in his shows. 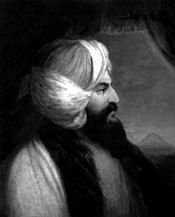 In 1812 he left England and after a tour of performances in Spain, Portugal and Sicily, he went to Malta in 1815 where he met Ismael Gibraltar, an emissary of Muhammad Ali, who at the time was undertaking a programme of agrarian land reclamation and important irrigation works.[5] Belzoni wanted to show Muhammad Ali a hydraulic machine of his own invention for raising the waters of the Nile. Though the experiment with this engine was successful, the project was not approved by the pasha. Belzoni, now without a job, was resolved to continue his travels. On the recommendation of the orientalist J. L. Burckhardt he was sent by Henry Salt, the British consul to Egypt, to the Ramesseum at Thebes, from where he removed with great skill the colossal bust of Ramesses II, commonly called "the Young Memnon". Shipped by Belzoni to England, this piece is still on prominent display at the British Museum. This weighed over 7 tons. It took him 17 days and 130 men to tow it to the river. He used levers to lift it onto rollers. Then he had his men distributed equally with 4 ropes drag it on the rollers. On the first day (27 July) he only covered a few yards, the second he covered 50 yards deliberately breaking the bases of 2 columns to clear the way for his burden. After 150 yards, it sank into the sand, and a detour of 300 yards on firmer ground was necessary. From there, it got a little easier, and, on 12 August, he finally made it to the river where he was able to load it on a boat for shipment to the British Museum in London.[6] 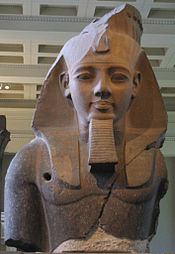 The 'Young Memnon', Rameses II, at the British Museum

He also expanded his investigations to the great temple of Edfu, visited Elephantine and Philae, cleared the great temple at Abu Simbel of sand (1817), made excavations at Karnak, and opened up the sepulchre of Seti I (still sometimes known as "Belzoni's Tomb"). He was the first to penetrate into the second pyramid of Giza, and the first European in modern times to visit the oasis of Bahariya. He also identified the ruins of Berenice on the Red Sea.[7]

In 1819 he returned to England and published an account of his travels and discoveries entitled Narrative of the Operations and Recent Discoveries within the Pyramids, Temples, Tombs and Excavations in Egypt and Nubia, &c[8] the following year. During 1820 and 1821 he also exhibited facsimiles of the tomb of Seti I. The exhibition was held at the Egyptian Hall, Piccadilly, London.[9] In 1822 Belzoni showed his model in Paris.[7]

In 1823 he set out for West Africa, intending to travel to Timbuktu. Having been refused permission to pass through Morocco, he chose the Guinea Coast route. He reached the Kingdom of Benin, but was seized with dysentery at a village called Gwato, and died there. According to the celebrated traveller Richard Francis Burton he was murdered and robbed. In 1829 his widow published his drawings of the royal tombs at Thebes.[7]

Belzoni was portrayed by Matthew Kelly in the 2005 BBC docudrama Egypt.
Alberto Siliotti has done the unique scholarly edition of his travels and it has been the subject of the Horus expedition in 1988.