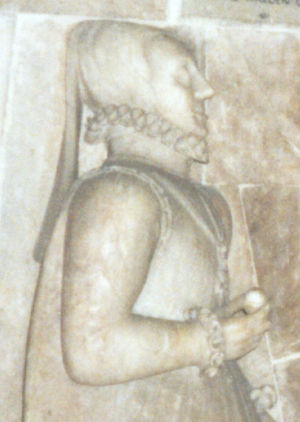 Blanche is properly called Blanche ferch Harry as she used this Welsh system of nomenclature that showed Harry was her father; later her name was anglicised to Parry or to Apharrie. Blanche[3] came from prominent border gentry and nine bardic poems refer to her family: five by Guto’r Glyn and one each by Gwilym Tew, Howel Dafi, Huw Cae Llwyd and Lewys Morgannwg.[4] She was born at Newcourt, Bacton, Herefordshire. Her parents were Henry Myles and his English wife Alice (a daughter and an heiress of Simon Milbo(u)rne). Henry Myles was Steward of Ewyas Lacy, Steward of Dore Abbey (Cistercian) and three times High Sheriff of Herefordshire. He was related to the Herbert family of the Earls of Pembroke. Blanche was bilingual in Welsh and English, though brought up in a Welsh cultural environment. There are strong indications of earlier family connections to the Lollards and Blanche's mother’s family were connected to Sir John Oldcastle. However, Blanche Parry and her sisters may have been educated by the Augustinian nuns of Aconbury.[5]

At the Royal Court

Blanche Parry arrived at the Royal Court with her aunt, Lady Troy who was the Lady Mistress to Edward VI and Elizabeth I as children.[6] Blanche Parry herself wrote in her epitaph in Bacton Church that she was the Queen's servant, "whose cradle saw I rocked", from Elizabeth's birth in 1533; Parry was then 25 or 26 years old. Thereafter she hardly left Elizabeth and almost certainly attended her in the Tower of London before she came to the throne. After Elizabeth's accession in 1558, and Kat Ashley's death in 1565, Blanche was appointed the Chief Gentlewoman of the Privy Chamber, and she was one of those who could control access to the Queen. She was in charge of the Queen's jewels from before Elizabeth's accession, the Queen's personal papers, clothes, furs and books, receiving the presents given to the Queen especially as New Year gifts. She received considerable sums of money on behalf of the Queen. She passed information to the Queen (including from John Vaughan, Blanche Parry's nephew, during the Northern Rebellion of 1569–1570, and Sir Nicholas White, Master of the Rolls in Ireland) and presentations of parliamentary bills. She also wrote letters on the Queen's behalf.[7] In addition, she supervised the Queen's linen "and other things belonging to her majesty"; this included "our musk cat", probably a ferret.[8]

Blanche Parry's position at the centre of the Royal Court was fully recognised at the time.[9] She was friends with Sir William Cecil, Lord Burghley. The Queen treated Blanche Parry as a baroness. Amongst the material rewards she received from Elizabeth were two wardships and she acquired lands in Herefordshire, Yorkshire and Wales. A meticulous lady, Blanche Parry commissioned the first known map of Llangorse Lake[10] in 1584 to aid the deliberations in the court case in which she became involved. Lord Burghley supervised Blanche Parry's two Wills, and his notes in his own handwriting survive for her first Will of 1578.[11]

Thinking she might retire to the family property of Newcourt,[12] Blanche commissioned her monument in Bacton Church. Dated to before November 1578, this has the first depiction of Queen Elizabeth I as Gloriana. The inscription on this monument said: "With maiden Queen a maid did end my life".[13] Blanche Parry did not retire, however, staying with the Queen until her death, and was buried in St. Margaret's, Westminster, the Queen paying all her funeral expenses. George Ballard saw her tomb in its original location in the 18th century.[14]

Bacton Church, Herefordshire, where her heart was interred,[15] has an altar cloth fashioned from an Elizabethan court dress, with an original design that is very similar to the Rainbow Portrait of Queen Elizabeth I.[16]

NOTE: The calendar brings together portraits of Elizabeth I as Princess and as Queen, Lord Burghley, the frontispiece of the Welsh Bible, Blanche's monuments and places to do with Blanche.