From Infogalactic: the planetary knowledge core
(Redirected from Bookman (reading))
Jump to: navigation, search
"Bookworm" redirects here. For other uses, see Bookworm (disambiguation).
Not to be confused with bibliomania. 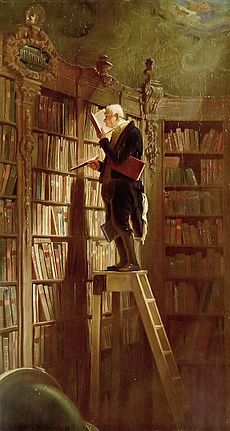 Bibliophilia or bibliophilism is the love of books, and a bibliophile is an individual who loves books.

The classic bibliophile is one who loves to read, admire and collect books, often amassing a large and specialized collection. Bibliophiles do not necessarily want to possess the books that they love; an alternative would be unusual bindings, autographed copies, etc.[1]

Usage of the term

Bibliophilia is not to be confused with bibliomania, an obsessive–compulsive disorder involving the collecting of books to the extent that interpersonal relations or health may be negatively affected, and in which the mere fact that a physical object is a book is sufficient for it to be collected or beloved. Some use the term "bibliomania" interchangeably with "bibliophily", and in fact, the Library of Congress does not use the term "bibliophily," but rather refers to its readers as either book collectors or bibliomaniacs.[2] The New York Public Library follows the same practice.[3]

According to Arthur H. Minters, the "private collecting of books was a fashion indulged in by many Romans, including Cicero and Atticus".[4] The term bibliophile entered the English language in 1824.[5] A bibliophile is to be distinguished from the much older notion of a bookman (which dates back to 1583), who is one who loves books, and especially reading; more generally, a bookman is one who participates in writing, publishing, or selling books.[6]

Lord Spencer and the Marquess of Blandford were noted bibliophiles. "The Roxburghe sale quickly became a foundational myth for the burgeoning secondhand book trade, and remains so to this day"; this sale is memorable due to the competition between "Lord Spencer and the marquis of Blandford [which] drove [the price of a probable first edition of Boccaccio's Decameron] up to the astonishing and unprecedented sum of £2,260".[7] J. P. Morgan was also a noted bibliophile. In 1884, he paid $24,750 for a 1459 edition of the Mainz Psalter.[8]