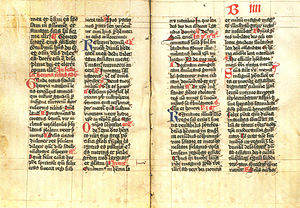 Pages from a breviary used in the Swedish Diocese of Strängnäs in the 15th Century A.D.

The Breviary (Latin: brevarium) is a book in many Western Christian denominations that "contains all the liturgical texts for the Office, whether said in choir or in private."[1] Pope Nicholas III approved a Franciscan breviary, for use in that religious order, and this was the first text that bore the title of breviary.[1] However, the "contents of the breviary, in their essential parts, are derived from the early ages of Christianity", consisting of psalms, Scripture lessons, writings of the Church Fathers, as well as hymns and prayers.[2] Historically, different breviaries were used in the various parts of Christendom, such as Aberdeen Breviary, Belleville Breviary, Stowe Breviary and Isabella Breviary, although eventually the Roman Breviary became the standard within the Roman Catholic Church.[3] The ancient breviary of The Order of The Most Holy Saviour (the Bridgettines) had been in use for more than 125 years before the Council of Trent and so was exempt from the Constitution of Pope Pius V which abolished the use of breviaries differing from that of Rome.[4] Now translated from Latin, The Syon Breviary (Daily Office of Our Lady) has been published in English for the first time, with plainchant music, to celebrate the 600th anniversary of the foundation of Syon Abbey in 1415 by King Henry V. Following the Oxford Movement in the Anglican Communion, in 1916, the Anglican Breviary was published by the Frank Gavin Liturgical Foundation.[5]