Bruce MacLeish Dern (born June 4, 1936) is an American actor. He frequently takes roles as a supporting character actor, often playing villains of unstable nature. He has appeared in over eighty films, and was nominated for the Academy Award for Best Supporting Actor for Coming Home (1978) and the Academy Award for Best Actor for Nebraska (2013). He won the Silver Bear for Best Actor at the 1982 Berlin Film Festival for That Championship Season and Best Actor at the 2013 Cannes Film Festival for Nebraska. His other film roles include They Shoot Horses, Don't They? (1969), The Cowboys (1972), The Great Gatsby (1974), Family Plot (1975), Black Sunday (1977) and The Hateful Eight (2015).

Dern was born in Chicago, Illinois, the son of Jean (née MacLeish) and John Dern, a utility chief and attorney.[1][2] He grew up in Kenilworth, Illinois.[3] His paternal grandfather, George Henry Dern, was a former Utah governor and Secretary of War (he was serving in the latter position during the time of Bruce's birth). Dern's maternal grandfather was a chairman of the Carson, Pirie and Scott stores,[4][5] his maternal granduncle was poet Archibald MacLeish, and his maternal great-grandfather was Scottish-born businessman Andrew MacLeish. Dern's godfather was former Illinois governor and two-time presidential candidate Adlai Stevenson.[6][7]

His ancestry includes Dutch, English, German, and Scottish. He attended The Choate School (now Choate Rosemary Hall) and the University of Pennsylvania.

Early in his career, Dern starred in the Philadelphia premiere of Waiting for Godot with Lyle Kessler. He appeared in several popular 1960s television shows, including Route 66, Naked City, Thriller, Sea Hunt, Surfside 6, 77 Sunset Strip, The Outer Limits and The Alfred Hitchcock Hour.

Dern had an uncredited role in Elia Kazan's 1960 movie Wild River starring Lee Remick, Montgomery Clift and Jo Ann Fleet. He appeared in numerous scenes in the movie alongside villains of the film. In one scene, though, his character becomes so upset when a villain friend hit a woman, that he himself gets punched to the ground.

In the 1962–63 season Dern played E.J. Stocker in the ABC adventure/drama series, Stoney Burke, about the rodeo circuit, and stars Jack Lord in the title role and with Warren Oates.

In 1964, he appeared in a major Alfred Hitchcock film, the psychological thriller Marnie, in a short role as the sailor seen in flashbacks about Marnie's mother. Also in 1964 he had a small but crucial film role in Hush… Hush, Sweet Charlotte as the lover of the young Charlotte (Bette Davis).

During the next five years, Dern continued appearing in several popular television series, with multiple appearances as different characters, including Wagon Train, The Virginian, Rawhide, 12 O'Clock High, The Fugitive, The F.B.I., The Big Valley, Gunsmoke and Bonanza, among others. During that period, he also appeared in several films, including The Wild Angels (1966), The War Wagon, The Trip (1967), Psych-Out, Will Penny (1968) and in the Clint Eastwood film, Hang 'Em High (1968) as a rustler/murderer.

Among Dern's first twenty film roles was a role in the Sydney Pollack picture They Shoot Horses, Don't They?, in 1969. That same year, he co-starred with James Garner and Walter Brennan in the classic film Support Your Local Sheriff! as gunfighter Joe Danby. In 1972, he appeared in four films: as the enemy and killer of John Wayne's character in The Cowboys notable for his character cold-bloodedly shooting Wayne in the back. Wayne warned Dern, "America will hate you for this." Dern wryly replied, "Yeah, but they'll love me in Berkeley." His best-known role is Freeman Lowell, the caretaker of Earth's last forests in the dark sci-fi film Silent Running (1972). He then starred with Jack Nicholson in The King of Marvin Gardens; and also in Thumb Tripping, after having been seen in over ninety TV episodes or films.

Other memorable roles include Tom Buchanan in F. Scott Fitzgerald's The Great Gatsby, or a psychotic Goodyear Blimp pilot who launches a terrorist attack at the Super Bowl in 1977's Black Sunday, and as Captain Bob Hyde in 1978's Coming Home, for which he received an Academy Award nomination for Best Supporting Actor.

In 1976, he appeared in Alfred Hitchcock's final film Family Plot, as the boyfriend of Blanche Tyler (Barbara Harris). Dern told an interviewer that, due to Hitchcock's failing health, the director often asked his assistance during the production. During the 1980s and 1990s, Dern kept working but was unable to hit the mark as he did before: after the films of the 1970s, he often played roles in Tattoo and All the Pretty Horses. Occasionally, he did land a few good films, including TV movies.

In 1983, he won the Silver Bear for Best Actor at the 33rd Berlin International Film Festival for his role in That Championship Season.[8]

His most recent efforts include the independent movies The Astronaut Farmer and Monster, a recurring role on the HBO series Big Love, and the monster movie Swamp Devil for RHI Films New York and the Sci Fi Channel.

On November 1, 2010, he was presented the 2,419th star on the Hollywood Walk of Fame. His daughter Laura Dern and his ex-wife Diane Ladd received stars on the same date. He was honored with a Legend Award at the inaugural Gold Coast International Film Festival on June 1, 2011.

On May 26, 2013, he won the Best Actor award at the 2013 Cannes Film Festival for his role in Alexander Payne's Nebraska.[9][10] The role, which received significant critical acclaim, subsequently earned Dern Golden Globe and Academy Award nominations for Best Actor, along with other accolades.

Dern married Marie Dawn Pierce in 1957, but divorced less than two years later. In 1960, Dern married actress Diane Ladd, but later divorced in 1969. The marriage produced daughter Laura Dern (b. 1967) who later became an Academy Award nominated actress. Another daughter, Diane Elizabeth Dern was born November 29, 1960, but died at eighteen months, from head injuries caused by falling into a swimming pool, on May 18, 1962. Shortly after his divorce from Ladd in 1969, Dern married Andrea Beckett, and remained married. 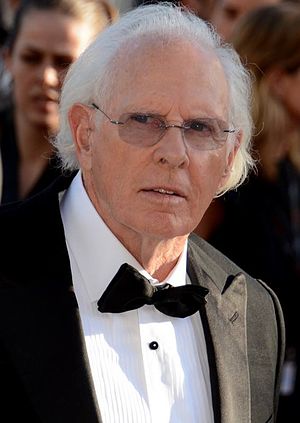 Dern at the 2013 Cannes Film Festival.