In Cambodia, a genocide was carried out by the Khmer Rouge (KR) regime led by Pol Pot between 1975 and 1979 in which an estimated one and a half to three million people died.[1] The KR group had planned to create a form of agrarian socialism which was founded on the ideals of Stalinism and Maoism. The KR policies of forced relocation of the population from urban centers, torture, mass executions, use of forced labor, malnutrition, and disease led to the deaths of an estimated 25 percent of the total population (around 2 million people).[2][3] The genocide ended following the Vietnamese invasion of Cambodia.[4] At least 20,000 mass graves, known as the Killing Fields, have since been uncovered.[5]

On 2 January 2001 the Cambodian government passed legislation to try a limited number of the KR leadership. Trials began on 17 February 2009.[6] On 7 August 2014, Nuon Chea and Khieu Samphan were convicted and received life sentences for crimes against humanity during the genocide. 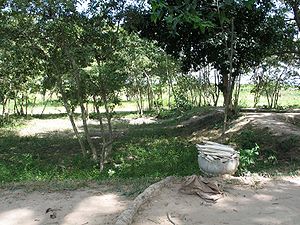 Mass grave at the Killing Field of Choeung Ek.

Ideology played an important role in the genocide. The desire of the KR to bring the nation back to a "mythic past", the desire to stop aid from abroad from entering the nation, which in their eyes was a corrupting influence, the desire to restore the country to an agrarian society, and the manner in which they tried to implement this goal were all factors of the genocide.[7][8] One KR leader said, it was for the "purification of the populace"[9] that the killings began.

Pol Pot and the KR forced virtually the entire population of Cambodia into mobile work teams.[10] Michael Hunt said that it was "an experiment in social mobilization unmatched in twentieth-century revolutions."[10] The KR used an inhumane labor regime, instilled fear and terror in order to keep the population in line, starvation, upheaval and resettlement, and collectivization of land.[10]

Ben Kiernan compares three genocides in history, the Armenian Genocide, the Holocaust and the Cambodian genocide, which although unique shared certain common features. Racism is one and was a major part of the ideology of all three regimes. Although all three perpetrators were largely secular, they targeted religious minorities. All three also tried to use force of arms to expand into a "contiguous heartland", (Turkestan, Lebensraum, and Kampuchea Krom), all three regimes also "idealized their ethnic peasantry as the true 'national' class, the ethnic soil from which the new state grew."[11] The Khmer Rouge regime targeted various ethnic groups during the genocide, forcibly relocating minority groups, and banned the use of minority languages. Religion was also banned, and the repression of adherents of Islam, Christianity, and Buddhism was extensive. And according to Kiernan, the "fiercest extermination campaign was directed against the ethnic Cham Muslim minority".[12] This attempt at the purification of Cambodian society along racial, social and political lines led to the purging of the military and political leaders of the former regime, along with the leaders of industry, journalists, students, doctors and lawyers as well as members of the Vietnamese and Chinese ethnic groups.[13] The exact number of Cham people killed is unknown; however, according to survivors there were an estimated 700,000 before the KR came to power, and there were an estimated 200,000 left following the genocide.[14] 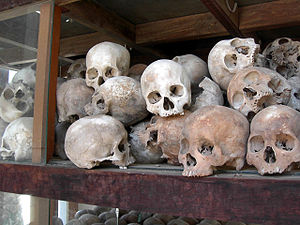 In 1977 the book Cambodge année zéro written by François Ponchaud was released, although the English translation was not published until 1978.[15] Ponchaud was one of the first authors to bring the genocide to the world's attention.[16] Ponchaud has said of the genocide that it, "Was above all, the translation into action the particular vision of a man [sic]: A person who has been spoiled by a corrupt regime cannot be reformed, he must be physically eliminated from the brotherhood of the pure."[17] In 1977 Murder of a gentle land: the untold story of a Communist genocide in Cambodia written by John Barron and Anthony Paul was published.[18] The book drew on accounts from refugees, and after an abridged version was published in Reader's Digest, it was widely read.[19]

In 1973 Kenneth M. Quinn, serving with the U.S. embassy had raised concerns over the atrocities being carried out. In a report, he stated that the KR had "much in common with those of totalitarian regimes in Nazi Germany and the Soviet Union".[20] Quinn has written of the KR that "[w]hat emerges as the explanation for the terror and violence that swept Cambodia during the 1970s is that a small group of alienated intellectuals, enraged by their perception of a totally corrupt society and imbued with a Maoist plan to create a pure socialist order in the shortest possible time, recruited extremely young, poor, and envious cadres, instructed them in harsh and brutal methods learned from Stalinist mentors, and used them to destroy physically the cultural underpinnings of the Khmer civilization and to impose a new society through purges, executions, and violence."[21]

The support of North Vietnam, in conjunction with China, was essential to the triumph of the KR in the Cambodian civil war.[22] During the genocide, China was the main international patron of the KR, supplying more than 15,000 military advisers and most of their external aid.[23] As a result of Chinese and Western opposition to the Vietnamese invasion, the KR retained Cambodia's UN seat until 1982.[24] China hosted KR military training camps from 1979 until at least 1986, and stationed military advisers with KR troops until as late as 1990.[24] After the 1991 Paris Peace Accords, Thailand continued to allow KR guerillas to trade and move across the Thai border, although criticism from the U.S. and Australia caused it to disavow passing any direct military support.[25] Ben Kiernan claimed that the US offered material support to the Khmer Rouge after the Vietnamese invasion.[26] Other sources have disputed these claims.[27][28][29][30] The Cambodian NGO Documentation Center of Cambodia has, as of 2008, mapped 20,000 mass graves.[31] The Cambodian Genocide Program at Yale University, directed by Ben Kiernan, estimates that the death toll may be closer to two million than one million after their discovery of mass graves.[32] 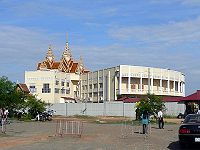 The tribunal's main building with the court room

On 15 July 1979 following the overthrow of the KR the new government passed "Decree Law No, 1", this allowed for the trial of Pol Pot and Ieng Sary for the crime of genocide. They were given an American defence lawyer, Hope Stevens.[33] They were tried in absentia and convicted of genocide.[34]

In January 2001 the Cambodian National Assembly passed legislation to form a tribunal to try members of the KR regime.[35]

So far the Extraordinary Chambers in the Courts of Cambodia (ECCC) has tried:

Kang Kek Iew, AKA Comrade Duch, AKA Hang Ping, was a mid level leader of the KR regime. He set up the first Khmer prison (code name M-13) in Kampong Forest, where the prisoners had to live in pits. He set up another prison two years later, known as M-99. It is estimated that up to 20,000 people were tortured and executed there. Following the Khmer Rouge victory in April 1975 the prison system was extended nationwide and in Phnom Penh the infamous Tuol Sleng prison (S-21 prison) was founded. Duch was in charge of the prison together with his lieutenants Mam Nai and Tang Sin Hean who led the torture and interrogation of prisoners. It is estimated that 16,000 people were killed within the Tuol Sleng compound with only seven known survivors. In 1999 Duch was interviewed by Nic Dunlop and Nate Thayer in which he admitted his guilt over the crimes carried out in Tuol Sleng, he expressed sorrow for his actions and stated he was willing to stand trial, and give evidence against his former comrades. On 16 February 2009 the trial began, and he accepted that he was responsible for the crimes carried out at Tuol Sleng, on 31 March 2009. On 26 July 2010 he was found guilty on charges of crimes against humanity, torture and murder and was given a sentence of 35 years imprisonment.[36] On 3 February 2012 his previous sentence was replaced with life imprisonment.[37]

On 19 September 2007 Nuon Chea, AKA, Brother Number Two was arrested, and later arraigned before the ECCC.[38] At the end of the trial in 2013 he denied all charges, stating that he had not given orders "to mistreat or kill people to deprive them of food or commit any genocide." He has expressed remorse and accepted moral responsibility for the crimes, stating, "I would like to sincerely apologize to the public, the victims, the families, and all Cambodian people."[39]

Ieng Thirith was arrested on 12 November 2007 at the same time as her husband, Ieng Sary.[40] She was indicted on 10 September 2010, for crimes against humanity and genocide. On 17 November 2011, following evaluations from medical experts, she was found to be unfit to stand trial due to a mental condition.[41]

Khieu Samphan was arrested on 19 November 2007 and charged with crimes against humanity.[42]

In 2014, Samphan and Chea were given life sentences for crimes against humanity. The tribunal has been criticised for being slow, as only three people have been tried and convicted.[43]

A few months before his death on 15 April 1998,[44] Pol Pot was interviewed by Nate Thayer. During the interview he stated that he had a clear conscience and denied being responsible for the genocide. Pol Pot asserted that he "came to carry out the struggle, not to kill people". According to Alex Alvarez, Pol Pot "portrayed himself as a misunderstood and unfairly vilified figure".[45]

In 2013, the Cambodian Prime Minister Hun Sen passed legislation which makes illegal the denial of the Cambodian genocide and other war crimes committed by the Khmer Rouge. The legislation was passed after comments by a member of the opposition, Kem Sokha, who is the deputy president of the Cambodian National Rescue Party. Sokha had stated that exhibits at Tuol Sleng were fabricated and that the artifacts had been faked by the Vietnamese following their invasion in 1979. Sokha's party have claimed that the comments have been taken out of context.[46]

In literature and media

Rithy Panh, "who is considered by many to be the cinematic voice of Cambodia, is himself a survivor of the Khmer Rouge's killing fields. Arguably his best known and most affecting documentary is "S-21: The Khmer Rouge Killing Machine/S-21, la machine de mort Khmer rouge" in which he recuperates memory to represent speechless horror and thereby shatter silence. With its unsettling reenactments, S-21 allows us to observe how memory and time may collapse to render the past as present and by doing so reveal the ordinary face of evil."[47]