Under the reign of Augustus, Rome waged a bloody conflict against the last independent nations of Hispania: the Cantabri, the Astures, and the Gallaeci. These warlike peoples presented fierce resistance to Roman domination: ten years of war and eight legions with their auxiliary troops —more than 50,000 soldiers in total— were needed to subdue the region.[2]

The Emperor himself moved to Segisama (modern Sasamon, Burgos), to supervise the campaign personally. The major fighting was completed in 19 BC, although there were minor rebellions until 16 BC and the Romans had to station two legions (X Gemina and IIII Macedonica) there for seventy more years.

"Sub occasu pacata erat fere omnis Hispania, nisi quam Pyrenaei desinentis scopulis inhaerentem citerior adluebat Oceanus. Hic duae validissimae gentes, Cantabri et Astures, inmunes imperii agitabant."
("In the west almost all Spain had been subjugated, except that part which adjoins the cliffs where the Pyrenees end and is washed by the nearer waters of the ocean. Here two powerful nations, the Cantabrians and the Asturians, lived in freedom from the rule of Rome.")

The Cantabri first appear in history in earlier wars in Iberia, where they served as mercenaries on various sides. In this way, in the years preceding the wars in Cantabria and Asturias, the Roman military became familiar with the warlike characteristics of the peoples of northern Hispania. There are accounts, for instance, of Cantabrians in the army of Hannibal during the Second Punic War. Additionally, there is evidence that they fought alongside the Vaccaei in 151 BC, and helped break the Roman siege of Numantia. It is also believed that there were Cantabrian troops present in the Sertorian Wars. According to Julius Caesar's own testimony, there were Cantabrians at the battle of Ilerda in 49 BC.

With all these antecedents, the Cantabrians began to be known throughout the Roman Empire. Roman troops even lost one of their standards to them, something inexplicable and humiliating in those days. Such were the disasters and the embarrassments that, although the Roman historians justified the campaigns as retribution for Cantabrian incursions in the Roman-controlled Meseta Central, there must have been a certain lust after Asturian gold and Cantabrian iron as well. Finally, in 26 BC, the Emperor himself, Caesar Augustus, went to Hispania, establishing his base in Segisama.

The Astures entered the historical record in the late 3rd century BC, being listed among the Spanish mercenaries of Hasdrubal Barca’s army at the battle of Metaurus River in 207 BC.[3][4] After the 2nd Punic War, their history is less clear. Rarely mentioned in the sources regarding the Lusitanian, Celtiberian or Roman Civil Wars of the 2nd and 1st centuries BC, they re-emerged from a relative obscurity just prior to the outbreak of the first Astur-Cantabrian war in the late 1st century BC.[5]

According to the Roman historian Dio Cassius, the tactics of the Cantabri were of guerrilla warfare, avoiding direct attacks on the Roman forces because of their inferior numbers. Their better knowledge of the difficult and mountainous terrain allowed them to conduct quick surprise strikes with ranged weapons, with ambushes followed by quick retreats, causing great damage to the Roman columns and supply lines.

According to what remains from representations on coins and Cantabrian stelae, the Cantabri were skilled in light arms. Lucan referred to this when he wrote, Cantaber exiguis et longis Teutonus armis (The Cantabrian with his short weapons and the Teuton with his long ones). They went equipped with small swords, daggers, small spears or javelins, lances, round or oval shields of wood, and leather chest protection. They also used a weapon like the Iberian falcata, and the bipennis, a type of double-headed axe peculiar to the peoples of Northern Hispania. There is no proof of their use of archery or slings, although it is quite probable that they knew and used them. 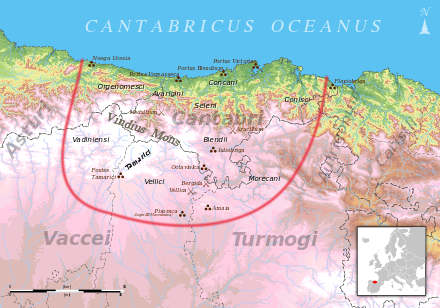 The map shows the borders of the Roman Cantabria during the Cantabrian Wars, in relationship to today's Cantabria, along with the tribes that lived there, the neighboring peoples, towns and geographical features, according to classical sources.

The Cantabrian were able at the time to ride horses, as reflected in the fact that some of their cavalry tactics would be adopted by the Roman army. Examples include the 'circulus cantabricus', a semicircular formation, and the 'cantabricus impetus', a massive frontal attack against enemy lines with the goal of breaching them, as described by Flavius Arrianus.

The quality of the Cantabrian enemy was such that Augustus was obliged to deploy eight legions in the conflict:[2]

to which he added various auxiliary troops:

The Roman navy was also sent to the Cantabrian coast from Gallia Aquitania. It was an important factor in the conflict's resolution, since it completed the encirclement of the Cantabri begun by the ground forces. It is calculated that, in total, the Roman Army deployed 70,000 men, although these calculations vary amongst authors, because they used a 5,000 men per legion base. In reality, the figure should surpass 80,000 men counting auxiliaries since, through the reforms of Gaius Marius, the legion had about 6,000 soldiers. However, in Augustus' time, although a legion was officially composed of 6,200 men, for various reasons, the number usually oscillated between 5,000 and 8,000. 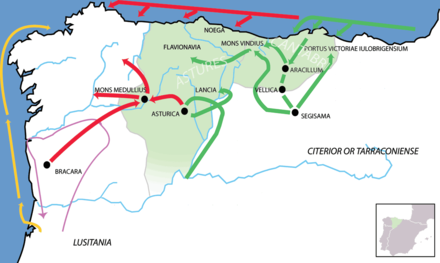 The Astures joined the Cantabri in a common defense. In the spring of 25 BC, there were three Roman legions established near the Astura River (modern Esla River), with troops from the Tarraconensis. According to contemporary Roman historian Florus in his Epitome of Roman History,[6] the armies of the Astures Transmontani came down from their snow-covered mountains (which is perfectly possible in the Picos de Europa in spring) and settled near the Astura River, getting ready to take the three Roman winter camps.

However, the brigaecini (Astures Cismontani) peoples of the Benavente region informed Augustus on their intentions. Augustus gave Brigantum, the camp of Augustan Asturica, to the Brigaeci as a reward for their help. Additionally, he shared out land in the plains to the allies. His general Carisius[7] attacked the Astur armies (probably commanded by Gausón), forcing them to take refuge in the fortified city of Lancia, the most important Astures Cismontani fort according to Florus.

Once Lancia was besieged, the Astur armies took refuge in the Mons Medullius (some scholars locate it at Las Médulas basing their opinions on Florus who specifically names the site in his history of Rome). The Roman legions besieged the mountain, building a fifteen-mile-long moat and ditch. According to Orosius, the Cantabri soldiers preferred to commit suicide with their own weapons and yew tree poison rather than surrender.

A year after his arrival, Augustus had to retire to Tarragona, presumably because of sickness. The conflict, however, lasted more than ten years (it serves as a reference that the Roman Empire conquered all of Gallaecia in less than seven years). It was one of only two campaigns directed personally by Augustus against barbarians, the other being the one against the Illyrians from 35 to 33 BC.

End of the conflict

In this conflict, unusually, the Romans chose not to take prisoners. Moreover, there was a tradition among the Cantabri of preferring suicide to slavery. They did this by sword, by fire, or, primarily, by poisoning themselves with potions made for the purpose. According to Silius Italicus they used a concoction made from the seeds of the yew tree, a plant with mythic significance for the Celts. Strabo said that they belittled death and pain, to the point of singing hymns of victory while being crucified. For them, according to Strabo, to die as soldiers and free men was a victory.

The major fighting was completed in 19 BC, although there were minor rebellions until 16 BC. Rome, as was their practice with other territories, began to impose their reforms. Despite the mass deaths, local resistance was such that the Romans had to station two legions (X Gemina and IIII Macedonica) there for seventy more years.

Through the Cantabrian War and the surrender of the Astures to Rome (it would be inexact to state that the Cantabri ever surrendered; Augustus refused the common victory celebration in his return to Rome), the Roman legions adopted from them the solar symbol of twin crosses and lunar symbols, such as the Cantabri lábaro.[citation needed] They would still be carrying this standard 300 years later. The Roman army also copied from the Cantabri the cavalry tactics circulus cantabricus and cantabricus impetus.[citation needed]