The presidency of Arturo Alessandri saw a rise in discontent[by whom?]over the inefficient government. In 1924, the Chilean armed forces, led by General Luis Altamirano, began the saber-rattling (ruido de sables), a protest where soldiers banged their sabers against the floor of the Congress. Amid threats from the armed forces, Alessandri decided he could no longer govern and submitted his resignation. Although this resignation was not approved by Congress, Alessandri left the country and Altamirano established a military junta.

However, another faction of the armed forces, led by Colonel Marmaduke Grove and Lieutenant Colonel Ibáñez, decided the junta's reforms did not go far enough in ending the government's inefficiency. They led another coup, deposed Altamirano, and established a new junta with Emilio Bello as head. Ibáñez and Grove, the powers behind the scene, agreed to ask Alessandri to return and complete his term.

Minister of War and Home Affairs

Alessandri returned in 1925 and drafted a new constitution which was designed to decrease the powers of the legislature, thereby making government more effective. Ibáñez was named Minister of War and later Home Affairs Minister. However, Alessandri decided Ibáñez was becoming too ambitious, and many[who?]ridiculed Alessandri as a pawn of Ibáñez. In response, Alessandri resigned once more and went into exile. Ibáñez announced his candidacy in the upcoming presidential elections, but the three main Chilean political parties (Conservative, Liberal, Radical) pressured him to desist. The three parties then presented a consensus choice, Emiliano Figueroa, to be the sole presidential candidate, in order to avoid political campaigning in the volatile political atmosphere. Nevertheless, Ibáñez's closest adviser, leftist José Santos Salas, later declared his presidential candidacy, and many suspected it was with Ibáñez's backing.

Figueroa triumphed with 71% of the vote, but kept Ibáñez as Home Affairs Minister. Ibáñez was able to control the weak Figueroa[clarification needed] who decided to resign in 1927 rather than be Ibáñez's puppet. Because he was Home Affairs Minister, under the Chilean constitution, Ibáñez became Vice President and announced elections for May 22 that year. In the presidential elections, the traditional political parties decided not to participate. Ibáñez's only opponent was the communist Elías Lafertte, who was exiled in the Juan Fernández Archipelago throughout the electoral campaign[clarification needed]. Ibáñez won the election with 98% of the vote.[clarification needed] 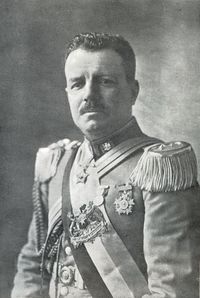 Ibáñez during his first presidency

Ibáñez began to exercise dictatorial powers, using rule by decree (decretos con fuerza de ley), suspending parliamentary elections, instead naming politicians to the Senate and Chamber of Deputies himself, etc. Political opponents were arrested and exiled, including his former ally Marmaduke Grove. His popularity, however, was helped by massive loans by American banks, which helped to promote a high rate of growth in the country. He constructed massive public works, and increased public spending. He also created the Carabineros de Chile (police force) by unifying the previously disorganized police forces[clarification needed].Another significant achievement of Ibáñez's first administration was the signing of the 1929 Treaty of Lima, in which Chile agreed to return the Tacna Province to Peru, which had been seized during the War of the Pacific.

His popularity lasted until after the 1929 collapse of Wall Street. At that point all loans were halted and called. Without the influx of foreign currency, Chile was heavily affected by the Great Depression. Ibáñez's large public spending did nothing to alleviate the situation, and his opponents, primarily the exiled Grove and Alessandri, began to plan a comeback. After a great wave of public unrest, Ibáñez left the country for exile, on July 26, 1931, after delegating his office to the president of the senate, Pedro Opazo, who in turn resigned in favor of the interior minister, Juan Esteban Montero.

Chile did not reach political stability until the 1932 reelection of Arturo Alessandri, whose economic policies managed to alleviate the depression[clarification needed]. Ibáñez decided to return to Chile, backed by a number of Nazi and fascist groups. His supporters, mainly the Socialist Union (not to be confused with the Socialist Party) and the Nazi National Socialist Movement, created the Popular Freedom Alliance (Alianza Popular Libertadora) and presented Ibáñez's candidacy in the 1938 elections. However, Chilean Nazis staged a coup against Alessandri before the elections. The government was able to defeat the rebels, who were arrested and executed. After this embarrassing incident, known as the Seguro Obrero massacre, Ibáñez decided to abandon the presidential campaign. Unwilling to support his arch-rival Alessandri's candidate, right-winger Gustavo Ross, Ibáñez declared his support for left-wing Pedro Aguirre, who won the election.

However, in 1939, extreme right-wing General Ariosto Herrera led a failed coup against Aguirre, the Ariostazo. Herrera's purpose was to install Ibáñez as leader, but the latter denied any knowledge of the coup and was never charged with any crime. In 1942, the small National Ibáñista Movement (Movimiento Nacional Ibañista) declared Ibáñez their candidate for the presidency. Ibáñez quickly attracted the support of small Nazi and fascist parties. The turning point for his candidacy, however, came when, after some political infighting, the biggest right-wing parties, Conservative and Liberal, decided to support Ibáñez. In the elections, Ibáñez won 44%, losing to left-winger Juan Antonio Ríos, who had received the support of the anti-Ibáñez rightists led by Arturo Alessandri.

In 1944, Ibáñez was involved in yet another failed coup. Some Nazi soldiers and carabineros (police), with the support of Argentine president Juan Perón, tried to depose President Ríos and install Ibáñez. However, the plot was uncovered before it could take place. None of the coup leaders, including Ibáñez, were arrested or tried.

During the government of Gabriel González Videla, another group of army officers, this time with the support of some members of the Air Force, decided to stage a coup and declare Ibáñez president. President González was alerted of the plan and ordered an investigation. Ringleader Ramón Vergara, together with some other conspirators, were arrested. Ibáñez, however, was absolved of all blame. This failed coup attempt became known as the Pig trotters' plot (complot de las patitas de chancho) because the coup leaders gathered in a restaurant which specialized in this typical Chilean dish.

Back to the Presidency

In the 1952 presidential elections, the center-right Agrarian Labor Party (Partido Agrario Laborista) declared Ibáñez a presidential candidate. Ibáñez also garnered the support of the left-wing Popular Socialist Party and some feminist political unions — the feminist María de la Cruz was his campaign manager, but she then refused a ministerial office. Ibáñez promised to "sweep" out political corruption and bad government with his "broom" and was nicknamed the "General of Hope". He criticized traditional political parties but was vague in his proposals and had no clear position in the political spectrum. He won the election with 47%.

His second term was a very modest success. By that time he was already old and ailing, and he left government mostly to his cabinet. His major problems during his presidency were those concerned with the economy. He had no plan to control inflation – one of the most pressing economic problems at the time in Chile – and as a result it skyrocketed to 71% in 1954 and 83% in 1955. Helped by the Klein-Sacks mission, Ibáñez managed to reduce it to 33% when he left the presidency. During his term, public transport costs rose by 50% and economic growth fell to 2.5%

Now much more of a centrist politically, Ibáñez won the support of many left-wingers by repealing the Law for the Defense of Democracy, which banned the Communist Party.

Some Chileans continued to support an Ibáñez dictatorship. These ibañistas, most of whom were retired army officers, created the "Línea Recta" (Straight Line) group to establish a new dictatorship. Ibáñez met with these conspirators, but ultimately his typical lack of trust ended the plans for a self-coup. A scandal rocked the Ibáñez administration when the press revealed Ibáñez's meetings with these conspirators.

Ibáñez was succeeded by Jorge Alessandri, the son of his arch-enemy Arturo Alessandri. He abandoned politics and died in Santiago in 1960. As a result of Ibañez's nebulous and vacillating political ideology, he left no intellectual legacy to Chilean politics. His long and often poorly defined presence of more than thirty years on the Chilean political scene (during which he often appeared to have little actual sympathy with the political goals of the groups that supported him at various times, e.g. he was too moderate to agree with the Nazis and too respectful of existing institutions to emulate Peronism successfully) produced its most significant results in the early years of his caretaker presidency in the 1920s through his efforts to development new towns in the regions to the south of the Central Valley and to improve existing infrastructure in the South.

The Región Aisén del General Carlos Ibáñez del Campo is named after him, in honor of his attempts to integrate the isolated regions of Aisén and Magallanes into Chile. The General Ibáñez Airport in Punta Arenas is also named after him.