Chinese numerals are words and characters used to denote numbers in Chinese.

Today speakers of Chinese use three written numeral systems: the system of Arabic numerals used world-wide, and two indigenous systems. The more familiar indigenous system is based on Chinese characters that correspond to numerals in the spoken language. These are shared with other languages of the Chinese cultural sphere such as Japanese, Korean and Vietnamese. Most people and institutions in China primarily use the Arabic system for convenience, with traditional Chinese numerals used in finance, mainly for writing amounts on checks, banknotes, some ceremonial occasions, some boxes, and on commercials.[citation needed]

The other indigenous system is the Suzhou numerals, or huama, a positional system, the only surviving form of the rod numerals. These were once used by Chinese mathematicians, and later in Chinese markets, such as those in Hong Kong before the 1990s, but have been gradually supplanted by Arabic (and also Roman) numerals. 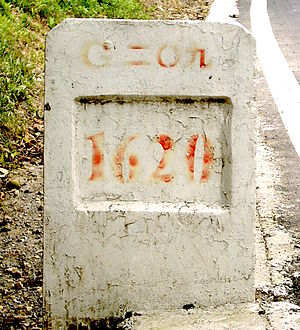 Chinese and Arabic numerals may coexist, as on this kilometer marker: 1620 km on Hwy G209 (G二〇九)

The Chinese character numeral system consists of the Chinese characters used by the Chinese written language to write spoken numerals. Similar to spelling-out numbers in English (e.g., "one thousand nine hundred forty-five"), it is not an independent system per se. Since it reflects spoken language, it does not use the positional system as in Arabic numerals, in the same way that spelling out numbers in English does not.

There are characters representing the numbers zero through nine, and other characters representing larger numbers such as tens, hundreds, thousands and so on. There are two sets of characters for Chinese numerals: one for everyday writing and one for use in commercial or financial contexts known as dàxiě (simplified Chinese: 大写; traditional Chinese: 大寫; literally: "big writing"). The latter arose because the characters used for writing numerals are geometrically simple, so simply using those numerals cannot prevent forgeries in the same way spelling numbers out in English would.[1] A forger could easily change the everyday characters 三十 (30) to 五千 (5000) just by adding a few strokes. That would not be possible when writing using the financial characters 參拾(30) and 伍仟 (5000). They are also referred to as "banker's numerals", "anti-fraud numerals", or "banker's anti-fraud numerals". For the same reason, rod numerals were never used in commercial records.

In the PLA, some numbers will have altered names when used for clearer radio communications. They are:

For numbers larger than 10,000, similarly to the long and short scales in the West, there have been four systems in ancient and modern usage. The original one, with unique names for all powers of ten up to the 14th, is ascribed to the Yellow Emperor in the 6th century book by Zhen Luan, Wujing suanshu (Arithmetic in Five Classics). In modern Chinese only the second system is used, in which the same ancient names are used, but each represents a number 10,000 (myriad, 萬 wàn) times the previous:

In practice, this situation does not lead to ambiguity, with the exception of 兆 (zhào), which means 1012 according to the system in common usage throughout the Chinese communities as well as in Japan and Korea, but has also been used for 106 in recent years (especially in mainland China for megabyte). To avoid problems arising from the ambiguity, the PRC government never uses this character in official documents, but uses 万亿 (wànyì) instead. The ROC government in Taiwan uses 兆 (zhào) to mean 1012 in official documents.

Numerals beyond 載 zài come from Buddhist texts in Sanskrit, but are mostly found in ancient texts.

The following are characters used to denote small order of magnitude in Chinese historically. With the introduction of SI units, some of them have been incorporated as SI prefixes, while the rest have fallen into disuse.

The Republic of China (Taiwan) defined 百萬 as the translation for mega. This translation is widely used in official documents, academic communities, informational industries, etc. However, the civil broadcasting industries sometimes use 兆赫 to represent "megahertz".

Today, the governments of both China and Taiwan use phonetic transliterations for the SI prefixes. However, the governments have each chosen different Chinese characters for certain prefixes. The following table lists the two different standards together with the early translation.

Multiple-digit numbers are constructed using a multiplicative principle; first the digit itself (from 1 to 9), then the place (such as 10 or 100); then the next digit.

For the numbers 11 through 19, the leading "one" (一) is usually omitted. In some dialects, like Shanghainese, when there are only two significant digits in the number, the leading "one" and the trailing zeroes are omitted. Sometimes, the one before "ten" in the middle of a number, such as 213, is omitted. Thus:

For numbers larger than a myriad, the same grouping system used in English applies, except in groups of four places (myriads) rather than in groups of three (thousands). Hence it is more convenient to think of numbers here as in groups of four, thus 1,234,567,890 is regrouped here as 12,3456,7890. Larger than a myriad, each number is therefore four zeroes longer than the one before it, thus 10000 × wàn (萬) = yì (億). If one of the numbers is between 10 and 19, the leading "one" is omitted as per the above point. Hence (numbers in parentheses indicate that the number has been written as one number rather than expanded):

Interior zeroes before the unit position (as in 1002) must be spelt explicitly. The reason for this is that trailing zeroes (as in 1200) are often omitted as shorthand, so ambiguity occurs. One zero is sufficient to resolve the ambiguity. Where the zero is before a digit other than the units digit, the explicit zero is not ambiguous and is therefore optional, but preferred. Thus:

To construct a fraction, the denominator is written first, followed by 分之 ("parts of") and then the numerator. This is the opposite of how fractions are read in English, which is numerator first. Each half of the fraction is written the same as a whole number. Mixed numbers are written with the whole-number part first, followed by 又 ("and"), then the fractional part.

Percentages are constructed similarly, using 百 (100) as the denominator. The 一 (one) before 百 is omitted.

Decimal numbers are constructed by first writing the whole number part, then inserting a point (simplified Chinese: 点; traditional Chinese: 點; pinyin: diǎn), and finally the decimal expression. The decimal expression is written using only the digits for 0 to 9, without multiplicative words.

Ordinal numbers are formed by adding 第 dì ("sequence") before the number.

Chinese grammar requires the use of classifiers (measure words) when a numeral is used together with a noun to express a quantity. For example, "three people" is expressed as 三个人 sān ge rén, "three GE person", where 个 ge is a classifier. There exist many different classifiers, for use with different sets of nouns, although 个 is the most common, and may be used informally in place of other classifiers.

Numbers of years are commonly spoken as a sequence of digits, as in 二零零一 èr líng líng yī ("two zero zero one") for the year 2001.[5] Names of months and days (in the Western system) are also expressed using numbers: 一月 yīyuè ("one month") for January, etc.; and 星期一 xīngqīyī ("week one") for Monday, etc. (although Sunday is 星期日 xīngqīrì, or informally 星期天 xīngqītiān, "week day"). Full dates are usually written in the format 2001年1月20日 for January 20, 2001 (using 年 nián "year", 月 yuè "month", and 日 rì "day") – all the numbers are read as cardinals, not ordinals, with no leading zeroes, and the year is read as a sequence of digits. For brevity the year yuè and rì may be dropped to give a date composed of just numbers, so for example 64, in Chinese is six-four, short for month six-day four i.e. June Fourth, a common Chinese shorthand for the Tiananmen Square protests of 1989.

In the same way that Roman numerals were standard in ancient and medieval Europe for mathematics and commerce, the Chinese formerly used the rod numerals, which is a positional system. The Suzhou numerals (simplified Chinese: 苏州花码; traditional Chinese: 蘇州花碼; pinyin: Sūzhōu huāmǎ) system is a variation of the Southern Song rod numerals. Nowadays, the huāmǎ system is only used for displaying prices in Chinese markets or on traditional handwritten invoices.

Historical use of numerals in China 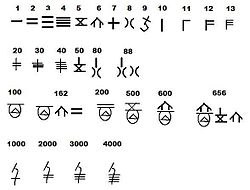 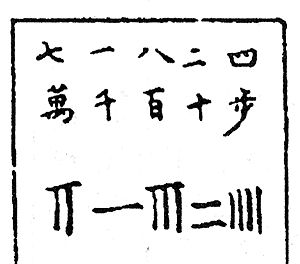 Japanese counting board with grids

Most Chinese numerals of later periods were descendants of the Shang dynasty oracle numerals of the 14th century BC. The oracle bone script numerals were found on tortoise shell and animal bones. In early civilizations, the Shang were able to express any numbers, however large, with only nine symbols and a counting board.[7]

In this system, horizontal rod numbers are used for the tens, thousands, hundred thousands etc. Sun Tzu wrote that "one is vertical, ten is horizontal".[8]

The counting rod numerals system has place value and decimal numerals for computation, and was used widely by Chinese merchants, mathematicians and astronomers from the Han dynasty to the 16th century.

Alexander Wylie, Christian missionary to China, in 1853 already refuted the notion that "the Chinese numbers were written in words at length", and stated that in ancient China, calculation was carried out by means of counting rods, and "the written character is evidently a rude presentation of these". After being introduced to the rod numerals, he said "Having thus obtained a simple but effective system of figures, we find the Chinese in actual use of a method of notation depending on the theory of local value [i.e. place-value], several centuries before such theory was understood in Europe, and while yet the science of numbers had scarcely dawned among the Arabs."[9]