From Infogalactic: the planetary knowledge core
Jump to: navigation, search
For other uses, see Colossus of Rhodes (disambiguation). 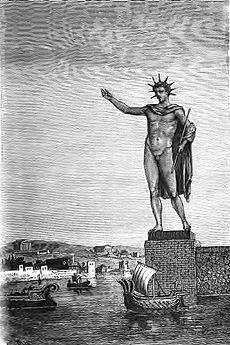 The Colossus of Rhodes, as depicted in an artist's impression of 1880

The Colossus of Rhodes /roʊdz/ (Ancient Greek: ὁ Κολοσσὸς Ῥόδιος ho Kolossòs Rhódios)[1] was a statue of the Greek titan-god of the sun Helios, erected in the city of Rhodes, on the Greek island of the same name, by Chares of Lindos in 280 BC. One of the Seven Wonders of the Ancient World, it was constructed to celebrate Rhodes' victory over the ruler of Cyprus, Antigonus I Monophthalmus, whose son unsuccessfully besieged Rhodes in 305 BC. Before its destruction in the earthquake of 226 BC, the Colossus of Rhodes stood over 30 metres (98 feet) high,[2] making it one of the tallest statues of the ancient world.[3]

In the late 4th century BC, Rhodes, allied with Ptolemy I of Egypt, prevented a mass invasion staged by their common enemy, Antigonus I Monophthalmus.

In 304 BC a relief force of ships sent by Ptolemy arrived, and Antigonus's army abandoned the siege, leaving most of their siege equipment. To celebrate their victory, the Rhodians sold the equipment left behind for 300 talents[4] and decided to use the money to build a colossal statue of their patron god, Helios. Construction was left to the direction of Chares, a native of Lindos in Rhodes, who had been involved with large-scale statues before. His teacher, the sculptor Lysippos, had constructed a 22-metre-high (72 ft)[5] bronze statue of Zeus at Tarentum.

Construction began in 292 BC. Ancient accounts, which differ to some degree, describe the structure as being built with iron tie bars to which brass plates were fixed to form the skin. The interior of the structure, which stood on a 15-metre (49-foot) high white marble pedestal near the Mandraki harbour entrance, was then filled with stone blocks as construction progressed.[6] Other sources place the Colossus on a breakwater in the harbour. The statue itself was over 30 metres (98 feet) tall. Much of the iron and bronze was reforged from the various weapons Demetrius's army left behind, and the abandoned second siege tower may have been used for scaffolding around the lower levels during construction. Upper portions were built with the use of a large earthen ramp. During the building, workers would pile mounds of earth on the sides of the colossus. Upon completion all of the earth was removed and the colossus was left to stand alone. After twelve years, in 280 BC, the statue was completed. Preserved in Greek anthologies of poetry is what is believed to be the genuine dedication text for the Colossus.[7] 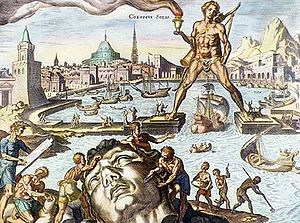 The Colossus of Rhodes as imagined in a 16th-century engraving by Martin Heemskerck, part of his series of the Seven Wonders of the World.

To you, O Sun, the people of Dorian Rhodes set up this bronze statue reaching to Olympus, when they had pacified the waves of war and crowned their city with the spoils taken from the enemy. Not only over the seas but also on land did they kindle the lovely torch of freedom and independence. For to the descendants of Herakles belongs dominion over sea and land.

Modern engineers have put forward a plausible hypothesis for the statue construction, based on the technology of those days (which was not based on the modern principles of earthquake engineering), and the accounts of Philo and Pliny who both saw and described the remains.[8]

The base pedestal was at least 60 feet (18 m) in diameter and either circular or octagonal. The feet were carved in stone and covered with thin bronze plates riveted together. Eight forged iron bars set in a radiating horizontal position formed the ankles and turned up to follow the lines of the legs while becoming progressively smaller. Individually cast curved bronze plates 60 inches (1,500 mm) square with turned-in edges were joined together by rivets through holes formed during casting to form a series of rings. The lower plates were 1 inch (25 mm) in thickness to the knee and 3/4 inch thick from knee to abdomen, while the upper plates were 1/4 to 1/2 inch thick except where additional strength was required at joints such as the shoulder, neck, etc.

The statue stood for 54 years until Rhodes was hit by the 226 BC earthquake, when significant damage was also done to large portions of the city, including the harbour and commercial buildings, which were destroyed.[9] The statue snapped at the knees and fell over onto the land. Ptolemy III offered to pay for the reconstruction of the statue, but the oracle of Delphi made the Rhodians afraid that they had offended Helios, and they declined to rebuild it.

The remains lay on the ground as described by Strabo (xiv.2.5) for over 800 years, and even broken, they were so impressive that many travelled to see them. Pliny the Elder remarked that few people could wrap their arms around the fallen thumb and that each of its fingers was larger than most statues.[10]

In 653, an Arab force under Muslim caliph Muawiyah I captured Rhodes, and according to The Chronicle of Theophanes the Confessor,[11] the statue was cast down and sold to a Jewish merchant of Edessa who loaded the bronze on 900 camels.[12] The Arab destruction and the purported sale to a Jew possibly originated as a powerful metaphor for Nebuchadnezzar's dream of the destruction of a great statue.[13]

The same story is recorded by Bar Hebraeus, writing in Syriac in the 13th century in Edessa:[14] (after the Arab pillage of Rhodes) "And a great number of men hauled on strong ropes which were tied round the brass Colossus which was in the city and pulled it down. And they weighed from it three thousand loads of Corinthian brass, and they sold it to a certain Jew from Emesa" (the Syrian city of Homs). Theophanes is the sole source of this account and all other sources can be traced to him. 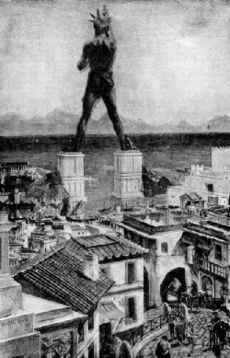 The harbour-straddling Colossus was a figment of medieval imaginations based on the dedication text's mention of "over land and sea" twice and the writings of an Italian visitor who in 1395 noted that local tradition held that the right foot had stood where the church of St John of the Colossus was then located.[15] Many later illustrations show the statue with one foot on either side of the harbour mouth with ships passing under it. References to this conception are also found in literary works. Shakespeare's Cassius in Julius Caesar (I,ii,136–38) says of Caesar:

Why man, he doth bestride the narrow world

Like a Colossus, and we petty men
Walk under his huge legs and peep about
To find ourselves dishonourable graves

(even if the walking may suggest a Colossus on land rather than spanning water). Shakespeare alludes to the Colossus also in Troilus and Cressida (V.5) and in Henry IV, Part 1 (V.1).

"The New Colossus' (1883), a sonnet by Emma Lazarus engraved on a bronze plaque and in 1903 mounted inside the pedestal of the Statue of Liberty in 1903, contrasts the latter with:

The brazen giant of Greek fame

with conquering limbs astride from land to land

While these fanciful images feed the misconception, the mechanics of the situation reveal that the Colossus could not have straddled the harbour as described in Lemprière's Classical Dictionary. If the completed statue had straddled the harbour, the entire mouth of the harbour would have been effectively closed during the entirety of the construction, and the ancient Rhodians did not have the means to dredge and re-open the harbour after construction. Also, the fallen statue would have blocked the harbour, and since the ancient Rhodians did not have the ability to remove the fallen statue from the harbour, it would not have remained visible on land for the next 800 years, as discussed above. Even neglecting these objections, the statue was made of bronze, and engineering analyses indicate that it could not have been built with its legs apart without collapsing from its own weight.[15] Many researchers have considered alternative positions for the statue which would have made it more feasible for actual construction by the ancients.[15][16] There is also no evidence that the statue held a torch aloft; the records simply say that after completion, the Rhodians kindled the "torch of freedom". A relief in a nearby temple shows Helios standing with one hand shielding his eyes (as if saluting) and it is quite possible that the colossus was constructed in the same pose. While we do not know what the statue looked like, we do have a good idea of what the head and face looked like, as it was of a standard rendering at the time. The head would have had curly hair with evenly spaced spikes of bronze or silver flame radiating, similar to the images found on contemporary Rhodian coins.[15]

Location of the ruins

Media reports in 1989 initially suggested that large stones found on the seabed off the coast of Rhodes might have been the remains of the Colossus, but this theory was later shown to be without merit.

Another theory published in an article in 2008 by Ursula Vedder suggests that the Colossus was never in the port, but rather was part of the Acropolis of Rhodes, on a hill today named Monte Smith, which overlooks the port area. The temple on top of Monte Smith has traditionally thought to have been devoted to Apollo, but according to Vedder, it would have been a Helios sanctuary. The enormous stone foundations at the temple site, the function of which is not definitively known by modern scholars, are proposed by Vedder to have been the supporting platform of the Colossus.[17]

The fortress of St Nicholas is also posited as the location. The fort's floor contains an anomalous circle of sandstone blocks which may have been the statue's foundation, while curved blocks of marble incorporated in the structure, too finely cut to have been made for the purpose, may be the remains of a marble base that sat upon the sandstone foundation.[15]