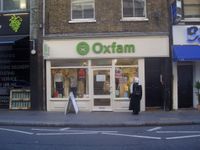 Drury Lane is a street on the eastern boundary of the Covent Garden area of London, running between Aldwych and High Holborn. The northern part is in the borough of Camden and the southern part in the City of Westminster.

The street originated as an early medieval lane called Via de Aldwych, which probably connected St. Giles Leper Hospital with the fields of Aldwych Close, owned by the hospital but traditionally said to have been granted to the Danes as part of a peace treaty with Alfred the Great in Saxon times. It acquired its name from the Suffolk barrister Sir Robert Drury, who built a mansion called Drury House on the lane around 1500. After the death in 1615 of his great-great-grandson, another Robert Drury, the property passed out of the family. It became the London house of the Earl of Craven, then a public house under the sign of his reputed mistress, the Queen of Bohemia. Subsequently the gardens and courtyards of the house were built over with rows of smallhouses. The remains of the house itself, which had been progressively demolished, were finally cleared in 1809.[1] By this time Drury Lane had become one of the worst slums in London, dominated by prostitution[2] and gin palaces. The area was eventually cleared to make way for the developments of Kingsway and Aldwych.[1]

The name of the street is often used to refer to the Theatre Royal, Drury Lane, which has in different incarnations been located in Drury Lane since the 17th century, even though today the main entrance is on Catherine Street. Also in Drury Lane is the New London Theatre.

The street Drury Lane is where The Muffin Man lives, as mentioned in the popular nursery rhyme, and also where the harlot of William Hogarth's A Harlot's Progress practises her profession.

173 Drury Lane was the location of the first J Sainsbury store, now one of the UK's largest retailers. The store was opened in 1869.[3]