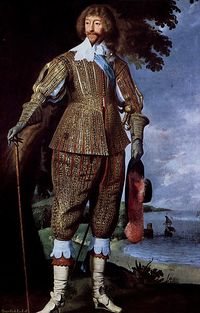 Lady Mary Rich, daughter of the first Earl of Holland, married Sir John Campbell, 5th Baronet, who was created Earl of Breadalbane and Holland in the Peerage of Scotland in 1681. Also, Lady Elizabeth Rich, only daughter and heiress of the fifth Earl of Warwick and second Earl of Holland, married Francis Edwardes. Their son William Edwardes succeeded to parts of the Rich estates and was created Baron Kensington in the Peerage of Ireland in 1776.

The name "Holland" in the title refers to the area of Lincolnshire historically known as Holland, not the province in the Netherlands.