The Earl or Mormaer of Lennox was the ruler of the district of the Lennox in western Scotland. 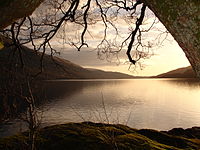 Loch Lomond, the heart of the Lennox
File:Lennox (district).PNG
Map of Scotland showing the Lennox

The first earl recorded is Ailin I, sometimes called 'Alwin'. He is traditionally said to have been created Earl of Lennox by King Malcolm IV in 1154, but this is likely too early a date. [Note: Other sources say Arkil (Arkyll) was the first mormaer. He fled Northumberland for Scotland about 1070 and was made Mormaer of Levenax by Malcolm. That title was in the 12th century changed to earl of Lennox.] The earldom may in fact have been created in the late twelfth century by King William the Lion for his brother David, and after David gained the higher title Earl of Huntingdon, he resigned the Earldom of Lennox and it passed to Ailin.

Earl Ailin's parentage and background is unknown. His line continued as Earls of Lennox until the time of Earl Duncan in the fifteenth century. Duncan's daughter Isabella married Murdoch, son of Robert, Duke of Albany. Duncan hoped this marriage would improve the family's prospects, but it would in fact be their downfall. Duke Robert had infamously murdered David, the heir to the throne, and when David's brother James became king, he wreaked his vengeance: almost the entire family were executed, including Earl Duncan, despite the fact he had had no part in the murder.

Isabella was imprisoned in Tantallon Castle, but she escaped execution, and succeeded her father as Countess of Lennox. All four of her sons died in her lifetime: two from King James's retribution, and two from natural causes. She had several grandsons, but none of them were legitimate, and the earldom therefore died with her around the year 1457. 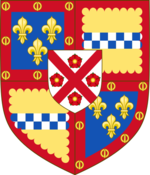 Arms of the Stewart earls and dukes of Lennox

In 1473 the earldom was reclaimed by Sir John Stewart of Darnley, who was the grandson of Elizabeth Lennox, daughter to Earl Duncan and sister to Countess Isabella. In 1565 his great-great-great-grandson Henry, Lord Darnley married Mary, Queen of Scots. He would be murdered at Kirk o' Field in 1567, and therefore on the death of his father Earl Matthew, the earldom of Lennox passed to James, the son of Henry and Mary. James would accede as King of Scots a few months later, and the title consequently merged with the Crown.

In 1572, the earldom was conferred upon King James's uncle Charles. He did not long enjoy the title, for he died four years later at the age of twenty-one. It was next granted to the king's great-uncle Robert in 1578. This Robert, described as being "symple and of lyttle action or accomte", was persuade to exchange the earldom of Lennox for the earldom of March, so that the king could give the former title to his friend and cousin Esmé. In 1581, Esmé's earldom was raised to a dukedom, and his line continued as Dukes of Lennox until the time of his great-grandson Charles, who died childless in 1672 after drowning at Elsinore while on a diplomatic mission to the Danish government.

In 1675, the Dukedom of Lennox was conferred upon Charles, bastard son of King Charles II, along with the English Dukedom of Richmond and several other titles. However, Duke Charles would later sell his lands in the Lennox to the Duke of Montrose, meaning he became Duke of Lennox in name alone. This line survives today, and is currently headed by another Duke Charles. Despite being Stewarts, they used "Lennox" as their surname, which was changed to "Gordon-Lennox" in the 19th century after the fourth Duke married Lady Charlotte Gordon, sister and heiress to George, Duke of Gordon.

The title became extinct c. 1459, as all four sons of Countess Isabella died without legitimate issue.

The title merged with the Crown upon the death of the fourth Earl.