Edgar Rice Burroughs (September 1, 1875 – March 19, 1950) was an American writer best known for his creations of the jungle hero Tarzan and the heroic Mars adventurer John Carter, although he produced works in many genres.

Burroughs was born on September 1, 1875, in Chicago, Illinois (he later lived for many years in the suburb of Oak Park), the fourth son of Major George Tyler Burroughs (1833–1913), a businessman and Civil War veteran, and his wife, Mary Evaline (Zieger) Burroughs (1840–1920). His middle name is from his paternal grandmother, Mary Rice Burroughs (1802–c.1870).[1][2][3] Burroughs was of almost entirely English ancestry, with a family line that had been in North America since the early colonial era. Through his grandmother Mary Rice, he was descended from Edmund Rice, one of the English Puritans who moved to Massachusetts in the early colonial period. He once remarked, "I can trace my ancestry back to Deacon Edmund Rice." The Burroughs side of the family was also of English origin and also emigrated to Massachusetts at around the same time. Many of his ancestors fought in the American Revolution. He had other ancestors who settled in Virginia during the colonial period, and he often emphasized his connection with that side of the family, seeing it as more romantic and warlike.[4]

Burroughs was educated at a number of local schools, and during the Chicago influenza epidemic in 1891, he spent half a year at his brother's ranch on the Raft River in Idaho. He then attended Phillips Academy, in Andover, Massachusetts, and then the Michigan Military Academy. Graduating in 1895, and failing the entrance exam for the United States Military Academy at West Point, he became an enlisted soldier with the 7th U.S. Cavalry in Fort Grant, Arizona Territory. After being diagnosed with a heart problem and thus ineligible to serve, he was discharged in 1897.[5] 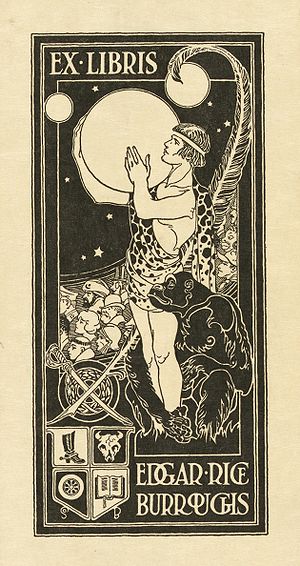 Burroughs's bookplate, showing Tarzan holding the planet Mars, surrounded by other characters from his stories and symbols relating to his personal interests and career 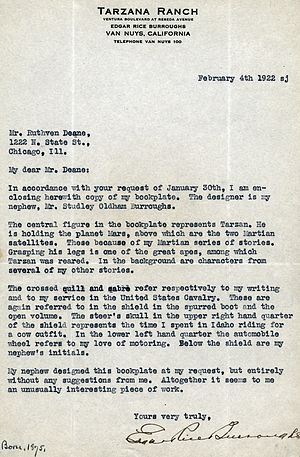 Typescript letter, with Tarzana Ranch letterhead, from Burroughs to Ruthven Deane, explaining the design and significance of his bookplate

After his discharge, Burroughs worked a number of different jobs. He drifted and worked on a ranch in Idaho. He found work at his father's firm in 1899. He married his childhood sweetheart, Emma Hulbert (1876–1944), in January 1900. In 1904, he left his job and worked less regularly, first in Idaho, then in Chicago.[6]

By 1911, after seven years of low wages, he was working as a pencil-sharpener wholesaler and began to write fiction. By this time, he and Emma had two children, Joan (1908–1972), who later married the Tarzan film actor James Pierce, and Hulbert (1909–1991).[7] During this period, he had copious spare time and began reading pulp fiction magazines. In 1929 he recalled thinking that

In 1913, Burroughs and Emma had their third and last child, John Coleman Burroughs (1913–1979), later known for his illustrations of his father's books.[citation needed]

In the 1920s Burroughs became a pilot, purchased a Security Airster S-1, and encouraged his family to learn to fly.[9][10]

Burroughs divorced Emma in 1934, and in 1935 he married the former actress Florence Gilbert Dearholt, the former wife of his friend Ashton Dearholt. Burroughs adopted the Dearholts' two children. He and Florence divorced in 1942.[11]

Burroughs was in his late 60s and was in Honolulu at the time of the Japanese attack on Pearl Harbor.[12] Despite his age, he applied for and received permission to become a war correspondent, becoming one of the oldest U.S. war correspondents during World War II. This period of his life is mentioned in William Brinkley's bestselling novel Don't Go Near the Water.

After the war ended, Burroughs moved back to Encino, California, where after many health problems, he died of a heart attack on March 19, 1950, having written almost 80 novels. He is buried at Tarzana, California, US.[13]

Aiming his work at the pulps, Burroughs had his first story, Under the Moons of Mars, serialized by Frank Munsey in the February to July 1912 issues of The All-Story[16][17][18] – under the name "Norman Bean" to protect his reputation.[18][lower-alpha 1] Under the Moons of Mars inaugurated the Barsoom series and earned Burroughs US$400 ($9,808 today). It was first published as a book by A. C. McClurg of Chicago in 1917, entitled A Princess of Mars, after three Barsoom sequels had appeared as serials and McClurg had published the first four serial Tarzan novels as books.[16]

Burroughs soon took up writing full-time, and by the time the run of Under the Moons of Mars had finished he had completed two novels, including Tarzan of the Apes, published from October 1912 and one of his most successful series.

Burroughs also wrote popular science fiction and fantasy stories involving adventurers from Earth transported to various planets (notably Barsoom, Burroughs's fictional name for Mars, and Amtor, his fictional name for Venus), lost islands, and into the interior of the hollow earth in his Pellucidar stories. He also wrote westerns and historical romances. Besides those published in All-Story, many of his stories were published in The Argosy magazine.

Tarzan was a cultural sensation when introduced. Burroughs was determined to capitalize on Tarzan's popularity in every way possible. He planned to exploit Tarzan through several different media including a syndicated Tarzan comic strip, movies and merchandise. Experts in the field advised against this course of action, stating that the different media would just end up competing against each other. Burroughs went ahead, however, and proved the experts wrong – the public wanted Tarzan in whatever fashion he was offered. Tarzan remains one of the most successful fictional characters to this day and is a cultural icon.

In either 1915 or 1919, Burroughs purchased a large ranch north of Los Angeles, California, which he named "Tarzana." The citizens of the community that sprang up around the ranch voted to adopt that name when their community, Tarzana, California was formed in 1927.[19] Also, the unincorporated community of Tarzan, Texas, was formally named in 1927 when the US Postal Service accepted the name,[20] reputedly coming from the popularity of the first (silent) Tarzan of the Apes film, starring Elmo Lincoln, and an early "Tarzan" comic strip.

In 1923 Burroughs set up his own company, Edgar Rice Burroughs, Inc., and began printing his own books through the 1930s.

In a Paris Review interview, Ray Bradbury said of Burroughs that "Edgar Rice Burroughs never would have looked upon himself as a social mover and shaker with social obligations. But as it turns out – and I love to say it because it upsets everyone terribly – Burroughs is probably the most influential writer in the entire history of the world."[21] Bradbury continued that "By giving romance and adventure to a whole generation of boys, Burroughs caused them to go out and decide to become special."

In Something of Myself (published posthumously in 1937) Rudyard Kipling wrote: “My Jungle Books begat Zoos of them. But the genius of all the genii was one who wrote a series called Tarzan of the Apes. I read it, but regret I never saw it on the films, where it rages most successfully. He had ‘jazzed’ the motif of the Jungle Books and, I imagine, had thoroughly enjoyed himself. He was reported to have said that he wanted to find out how bad a book he could write and ‘get away with’, which is a legitimate ambition.” (Ch. 8, “Working Tools”).

These three texts have been published by various houses in one or two volumes. Adding to the confusion, some editions have the original (significantly longer) introduction to Part I from the first publication as a magazine serial, and others have the shorter version from the first book publication, which included all three parts under the title The Moon Maid.[29]