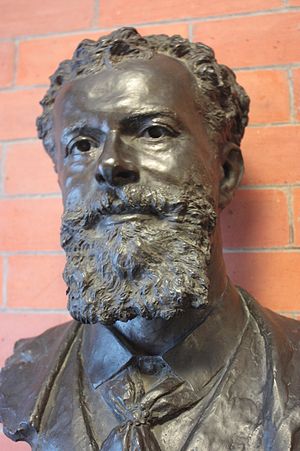 He was born in Islington, north London on 27 July 1852, was son of Edward Ford (died 1864) and Martha Lydia Gardner. His family moved to Blackheath while he was still a child. His father, who was in business in the City, died when he was barely twelve. After he had spent some time at Blackheath proprietary school, his mother determined that he should follow the strong bent towards art which he had already shown. She took him to Antwerp, where she sent him to the Academy as a student of painting. From Antwerp they moved after a time to Munich. There Ford studied under Michael Wagmüller, who advised him to transfer his attention to modelling, which he did. Before leaving Munich, Ford married, in 1873, Anne Gwendoline, the third daughter of Baron Frans von Kreuzer.[1]

On returning to this country about 1874, Ford settled at Blackheath, whence he sent a bust of his wife to the Royal Academy of 1875. This at once attracted attention, and from that time onward the sculptor's career was watched with interest. Beginning with the statue of Rowland Hill at the Royal Exchange (1881), his more important works are : Irving as Hamlet (1883), in the Guildhall Art Gallery ; Gordon (1890), of the famous general mounted on a camel, of which examples are at the Royal Engineers Barracks at Chatham and at the Gordon's School in Woking; the Shelley Memorial in University College, Oxford (1892); the equestrian statue of Lord Strathnaim at Knightsbridge (1895); and the memorial to Queen Victoria at Manchester (1901). 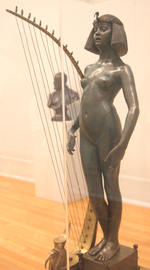 Ford's statue The Egyptian Singer (aka The Singer) - photographed at Tate Britain, 2010. In February 2015 it was returned to display, close to its companion Applause. 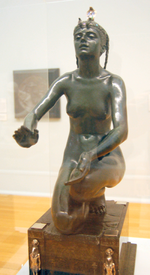 Ford's statue Applause (a once rarely seen companion piece to The Singer, back on display at Tate Britain as of December 2012) - photographed in September 2010

Ford also modelled a series of bronze statuettes. In each of these he endeavoured to embody some playful fancy which was, occasionally, less sculpturesque than literary.[1] The most successful, perhaps, of these are Folly (1886) (bought by the Chantrey Fund, and now in the Tate Gallery), The Singer, (1889), Applause, Peace, (1890), Echo (1895), Glory to the Dead (1901) and Snowdrift (exhibited posthumously, 1902).

He was one of the first English sculptors to publish small replicas of his statues, which did much to extend his reputation.[1]

In portraiture he may be said to have achieved his greatest success. His busts are always extremely refined and show his sitters at their best. Those (in bronze) of his fellow-artists Arthur Hacker (1894), and (1897), and of AJ Balfour are all striking likenesses, and are equalled by that in marble of Sir Frederick Bramwell (for the Royal Institution) and by many more. 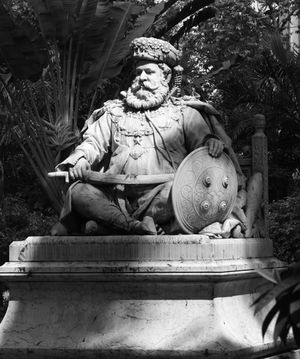 The standing statue of William Ewart Gladstone (1894, for the City Liberal Club, London) is to be regarded as one of Ford's better portrait works. The colossal General Charles Gordon, camel-mounted, for Chatham, Lord Strathnairn, an equestrian group for Knightsbridge, and the Maharajah of Mysore (1900) comprise his larger works of the kind. A beautiful nude recumbent statue of Percy Bysshe Shelley (1892) upon a cleverly designed base is the centrepiece of the Shelley Memorial at University College, Oxford. His posthumously-exhibited female nude The Snowdrift, now in the Lady Lever Art Gallery, uses a similar pose. 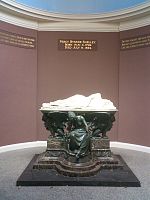 Ford's statue of the poet Shelley in the Shelley Memorial, University College, Oxford

Ford's only known statue commissioned in India is of famous philanthropist Maharaja Lakshmeshwar Singh Bahadur of Darbhanga. This statue is in city of Kolkata, West Bengal.[2]

His obituary in The Sketch, dated Jan 1 1902, states that he died of pneumonia exacerbated by a weak heart.

Ford's influence on the younger generation of sculptors was considerable, and of good effect. His charming disposition rendered him extremely popular, and when he died a monument was erected to his memory (Andrea Carlo Lucchesi, sculptor, J W Simpson, architect) in St John's Wood, near to where he dwelt. The monument comprises a stone pillar with a seated bronze mourning figure at the front (based on Ford's statue The Muse of Poetry, a.k.a. Song and a mourning figure based thereupon for Ford's Shelley Memorial), and a wreathed bust of Ford at rear. It stands close to what is now the site of Abbey Road Studios and its famous zebra crossing (indeed, another zebra crossing allows access to the traffic island on which the monument stands).