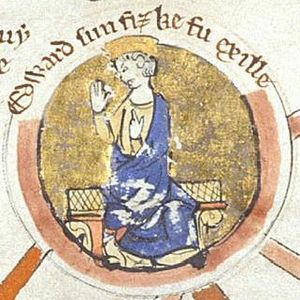 Edward the Exile depicted on a medieval genealogical scroll.

Edward the Exile (1016 – late August 1057), also called Edward Ætheling, was the son of King Edmund Ironside and of Ealdgyth. He spent most of his life in exile following the defeat of his father by Canute the Great.

After the Danish conquest of England in 1016, Canute had Edward, said to be only a few months old, and his brother, Edmund, sent to the Swedish court of Olof Skötkonung[1][2] (who was either Canute's half-brother or stepbrother), supposedly with instructions to have the children murdered. Instead, the two boys were secretly sent either to Kiev,[3] where Olof's daughter Ingigerd was the Queen, or to Poland, where Canute's uncle Bolesław I Chrobry was duke.[4] Later Edward made his way to Hungary, probably in the retinue of Ingigerd's son-in-law, András in 1046, whom he supported in his successful bid for the Hungarian throne.[citation needed]

On hearing the news of his being alive, Edward the Confessor recalled him to England in 1056 and made him his heir. Edward offered the last chance of an undisputed succession within the Saxon royal house. News of Edward's existence came at a time when the old Anglo-Saxon Monarchy, restored after a long period of Danish domination, was heading for catastrophe. The Confessor, personally devout but politically weak and without children, was unable to make an effective stand against the steady advance of the powerful and ambitious sons of Godwin, Earl of Wessex. From across the Channel William, Duke of Normandy, also had an eye on the succession. Edward the Exile appeared at just the right time. Approved by both king and by the Witan, the Council of the Realm, he offered a way out of the impasse, a counter both to the Godwinsons and to William, and one with a legitimacy that could not be readily challenged.

Edward, who had been in the custody of Henry III, the Holy Roman Emperor, finally came back to England at the end of August 1057. But he died within two days of his arrival. The exact cause of Edward's death remains unclear, but he had many powerful enemies, and there is a strong possibility that he was murdered, although by whom is not known with any certainty. It is known, though, that his access to the king was blocked soon after his arrival in England for some unexplained reason, at a time when the Godwinsons, in the person of Harold, were once again in the ascendant. This turn of events left the throne of England to be disputed by Earl Harold and Duke William, ultimately leading to the Norman Conquest of England. He was buried in Old St Paul's Cathedral.

Edward's wife was named Agatha, whose origins are disputed.[5] Their children were: