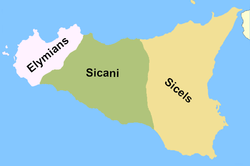 Approximate locations of the Elymians and their neighbors, the Sicani and the Sicels, in Sicily around 11th century BC (before the arrival of the Phoenicians and the Greeks).[dubious – discuss]

The Elymians (Greek Ἔλυμοι, Latin Elymi) were an ancient people who inhabited the western part of Sicily during the Bronze Age and Classical antiquity.

Apart from mythological tales, there is little known about the identity and culture of the Elymians. They are indistinguishable from their Sicani neighbours in the archaeological record of the early Iron Age (c. 1100–c. 700 BC). Thereafter they appear to have adopted many aspects of the culture of the Greek colonists of Sicily, erecting the remarkable temple at Segesta and using the Greek alphabet to write their own language. As yet, no one has succeeded in deciphering the Elymian language.

The Elymian temple at Segesta, Sicily

The Elymians maintained friendly relations (and alliances) with Carthage but came into frequent conflict with the expansionist Greek colonies of western Sicily, especially Selinus. Boundary disputes with Selinus broke out into open warfare on several occasions after 580 BC. They sought to ally first with Athens against Selinus, provoking the disastrous Sicilian expedition of 415 BC-413 BC. Following this failure they encouraged the Carthaginians to attack Selinus in 409 BC and succeeded in obtaining the destruction of their rivals.

However, they turned on Carthage during the First Punic War and allied with Rome instead. The Elymians were granted a privileged status under Roman rule and were exempted from taxes. This was said to have been in recognition of the Elymians' claim of Trojan ancestry, which was seen as making them cousins of the Roman people, who also claimed to have been descended from the Trojans. The Elymians appear to have largely disappeared from view under Roman rule, presumably becoming assimilated into the general Sicilian population.

The Elymi shared western Sicily with the Sicani, the Phoenicians, and later the Greeks. Their three most important cities were Segesta, the political centre; Eryx (the modern Erice), a religious centre; and Entella. Other cities were Elima, Halyciae (referred to as Alicia in modern Italian sources), Iaitas, Hypana, and Drepanon.