From Infogalactic: the planetary knowledge core
Jump to: navigation, search
For other uses, see Evidence (disambiguation). 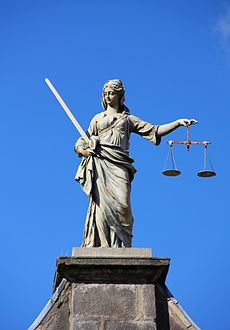 The balance scales seen in depictions of Lady Justice can be seen as representing the weighing of evidence in a legal proceeding.

Evidence, broadly construed, is anything presented in support of an assertion.[1] This support may be strong or weak. The strongest type of evidence is that which provides direct proof of the truth of an assertion. At the other extreme is evidence that is merely consistent with an assertion but does not rule out other, contradictory assertions, as in circumstantial evidence.

In law, rules of evidence govern the types of evidence that are admissible in a legal proceeding. Types of legal evidence include testimony, documentary evidence, and physical evidence. The parts of a legal case which are not in controversy are known, in general, as the "facts of the case." Beyond any facts that are undisputed, a judge or jury is usually tasked with being a trier of fact for the other issues of a case. Evidence and rules are used to decide questions of fact that are disputed, some of which may be determined by the legal burden of proof relevant to the case. Evidence in certain cases (e.g. capital crimes) must be more compelling than in other situations (e.g. minor civil disputes), which drastically affects the quality and quantity of evidence necessary to decide a case.

Scientific evidence consists of observations and experimental results that serve to support, refute, or modify a scientific hypothesis or theory, when collected and interpreted in accordance with the scientific method.

In philosophy, the study of evidence is closely tied to epistemology, which considers the nature of knowledge and how it can be acquired.

The burden of proof is the obligation of a party in an argument or dispute to provide sufficient evidence to shift the other party's or a third party's belief from their initial position. The burden of proof must be fulfilled by both establishing confirming evidence and negating oppositional evidence. Conclusions drawn from evidence may be subject to criticism based on a perceived failure to fulfill the burden of proof.

The latter question depends on the nature of the point under contention and determines the quantity and quality of evidence required to meet the burden of proof.

In a criminal trial in the United States, for example, the prosecution carries the burden of proof since the defendant is presumed innocent until proven guilty beyond a reasonable doubt. Similarly, in most civil procedures, the plaintiff carries the burden of proof and must convince a judge or jury that the preponderance of the evidence is on their side. Other legal standards of proof include "reasonable suspicion", "probable cause" (as for arrest), "prima facie evidence", "credible evidence", "substantial evidence", and "clear and convincing evidence".

In a philosophical debate, there is an implicit burden of proof on the party asserting a claim, since the default position is generally one of neutrality or unbelief. Each party in a debate will therefore carry the burden of proof for any assertion they make in the argument, although some assertions may be granted by the other party without further evidence. If the debate is set up as a resolution to be supported by one side and refuted by another, the overall burden of proof is on the side supporting the resolution.

In scientific research evidence is accumulated through observations of phenomena that occur in the natural world, or which are created as experiments in a laboratory or other controlled conditions. Scientific evidence usually goes towards supporting or rejecting a hypothesis.

One must always remember that the burden of proof is on the person making a contentious claim. Within science, this translates to the burden resting on presenters of a paper, in which the presenters argue for their specific findings. This paper is placed before a panel of judges where the presenter must defend the thesis against all challenges.

When evidence is contradictory to predicted expectations, the evidence and the ways of making it are often closely scrutinized (see experimenter's regress) and only at the end of this process is the hypothesis rejected: this can be referred to as 'refutation of the hypothesis'. The rules for evidence used by science are collected systematically in an attempt to avoid the bias inherent to anecdotal evidence. 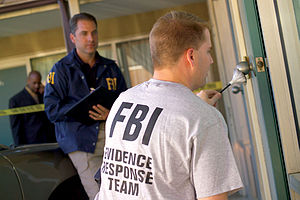 Evidence forms the very foundation of legal system,[citation needed] without which law would be subject to the whims of those with power.

In law, the production and presentation of evidence depends first on establishing on whom the burden of proof lies. Admissible evidence is that which a court receives and considers for the purposes of deciding a particular case. Two primary burden-of-proof considerations exist in law. The first is on whom the burden rests. In many, especially Western, courts, the burden of proof is placed on the prosecution in criminal cases and the plaintiff in civil cases. The second consideration is the degree of certitude proof must reach, depending on both the quantity and quality of evidence. These degrees are different for criminal and civil cases, the former requiring evidence beyond a reasonable doubt, the latter considering only which side has the preponderance of evidence, or whether the proposition is more likely true or false. The decision maker, often a jury, but sometimes a judge, decides whether the burden of proof has been fulfilled.

After deciding who will carry the burden of proof, evidence is first gathered and then presented before the court:

In criminal investigation, rather than attempting to prove an abstract or hypothetical point, the evidence gatherers attempt to determine who is responsible for a criminal act. The focus of criminal evidence is to connect physical evidence and reports of witnesses to a specific person.

Evidence before the court

Presenting evidence before the court differs from the gathering of evidence in important ways. Gathering evidence may take many forms; presenting evidence that tend to prove or disprove the point at issue is strictly governed by rules. Failure to follow these rules leads to any number of consequences. In law, certain policies allow (or require) evidence to be excluded from consideration based either on indicia relating to reliability, or broader social concerns. Testimony (which tells) and exhibits (which show) are the two main categories of evidence presented at a trial or hearing. In the United States, evidence in federal court is admitted or excluded under the Federal Rules of Evidence.[2]