Ernst Waldfried Josef Wenzel Mach (/ˈmɑːx/; German: [ˈɛɐ̯nst maχ]; February 18, 1838 – February 19, 1916) was an Austrian[5] physicist and philosopher, noted for his contributions to physics such as the Mach number and the study of shock waves. As a philosopher of science, he was a major influence on logical positivism, American pragmatism[6] and through his criticism of Newton, a forerunner of Einstein's relativity.

Ernst Waldfried Josef Wenzel Mach was born in Brno-Chrlice (German: Chirlitz), Moravia (then in the Austrian empire, now part of Brno in the Czech Republic). His father, who had graduated from Charles University in Prague, acted as tutor to the noble Brethon family in Zlín, eastern Moravia. His grandfather, Wenzl Lanhaus, an administrator of the estate Chirlitz, was also master builder of the streets there. His activities in that field later influenced the theoretical work of Ernst Mach. Some sources give Mach's birthplace as Turas/Tuřany (now also part of Brno), the site of the Chirlitz registry-office. Peregrin Weiss baptized Ernst Mach into the Roman Catholic Church in Turas/Tuřany. Despite his Catholic background, he later became an atheist[7] and his theory and life is compared with Buddhism.[8][9]

Up to the age of 14, Mach received his education at home from his parents. He then entered a Gymnasium in Kroměříž (German: Kremsier), where he studied for three years. In 1855 he became a student at the University of Vienna. There he studied physics and for one semester medical physiology, receiving his doctorate in physics in 1860 and his Habilitation the following year. His early work focused on the Doppler effect in optics and acoustics. In 1864 he took a job as Professor of Mathematics at the University of Graz, having turned down the position of a chair in surgery at the University of Salzburg to do so, and in 1866 he was appointed as Professor of Physics. During that period, Mach continued his work in psycho-physics and in sensory perception. In 1867, he took the chair of Experimental Physics at the Charles University, Prague, where he stayed for 28 years before returning to Vienna.

Mach's main contribution to physics involved his description and photographs of spark shock-waves and then ballistic shock-waves. He described how when a bullet or shell moved faster than the speed of sound, it created a compression of air in front of it. Using schlieren photography, he and his son Ludwig were able to photograph the shadows of the invisible shock waves. During the early 1890s Ludwig was able to invent an interferometer which allowed for much clearer photographs. But Mach also made many contributions to psychology and physiology, including his anticipation of gestalt phenomena, his discovery of the oblique effect and of Mach bands, an inhibition-influenced type of visual illusion, and especially his discovery of a non-acoustic function of the inner ear which helps control human balance.

One of the best-known of Mach's ideas is the so-called "Mach principle," concerning the physical origin of inertia. This was never written down by Mach, but was given a graphic verbal form, attributed by Philipp Frank to Mach himself, as, "When the subway jerks, it's the fixed stars that throw you down."

Mach also became well known for his philosophy developed in close interplay with his science.[10] Mach defended a type of phenomenalism recognizing only sensations as real. This position seemed incompatible with the view of atoms and molecules as external, mind-independent things. He famously declared, after an 1897 lecture by Ludwig Boltzmann at the Imperial Academy of Science in Vienna: "I don't believe that atoms exist!"[11] From about 1908 to 1911 Mach's reluctance to acknowledge the reality of atoms was criticized by Max Planck as being incompatible with physics. Einstein's 1905 demonstration that the statistical fluctuations of atoms allowed measurement of their existence without direct individuated sensory evidence marked a turning point in the acceptance of atomic theory. Some of Mach's criticisms of Newton's position on space and time influenced Einstein, but later Einstein realized that Mach was basically opposed to Newton's philosophy and concluded that his physical criticism was not sound.

In 1898 Mach suffered from cardiac arrest and in 1901 retired from the University of Vienna and was appointed to the upper chamber of the Austrian parliament. On leaving Vienna in 1913 he moved to his son's home in Vaterstetten, near Munich, where he continued writing and corresponding until his death in 1916. His current living descendant is Marilyn vos Savant (her father was Joseph Mach). 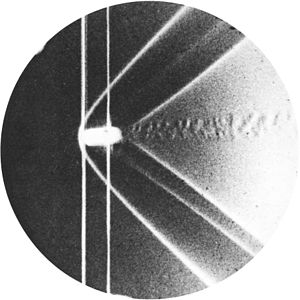 Ernst Mach’s photography of a bow shockwave around a supersonic bullet, in 1888.

Most of Mach's initial studies in the field of experimental physics concentrated on the interference, diffraction, polarization and refraction of light in different media under external influences. From there followed important explorations in the field of supersonic fluid mechanics. Mach and physicist-photographer Peter Salcher presented their paper on this subject [12] in 1887; it correctly describes the sound effects observed during the supersonic motion of a projectile. They deduced and experimentally confirmed the existence of a shock wave which of conical shape, with the projectile at the apex.[13] The ratio of the speed of a fluid to the local speed of sound vp/vs is now called the Mach number. It is a critical parameter in the description of high-speed fluid movement in aerodynamics and hydrodynamics. Mach also contributed to cosmology the hypothesis known as Mach's principle. 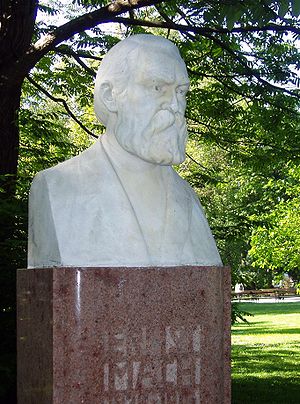 Bust of Mach in the Rathauspark (City Hall Park) in Vienna, Austria.

From 1895 to 1901, Mach held a newly created chair for "the history and philosophy of the inductive sciences" at the University of Vienna.[14] In his historico-philosophical studies, Mach developed a phenomenalistic philosophy of science which became influential in the 19th and 20th centuries. He originally saw scientific laws as summaries of experimental events, constructed for the purpose of making complex data comprehensible, but later emphasized mathematical functions as a more useful way to describe sensory appearances. Thus scientific laws while somewhat idealized have more to do with describing sensations than with reality as it exists beyond sensations.[15]

Mach's positivism also influenced many Russian Marxists, such as Alexander Bogdanov (1873–1928). In 1908, Lenin wrote a philosophical work, Materialism and Empirio-criticism (published 1909), in which he criticized Machism and the views of "Russian Machists".[16]

In accordance with this philosophy, Mach opposed Ludwig Boltzmann and others who proposed an atomic theory of physics. Since one cannot observe things as small as atoms directly, and since no atomic model at the time was consistent, the atomic hypothesis seemed to Mach to be unwarranted, and perhaps not sufficiently "economical". Mach had a direct influence on the Vienna Circle philosophers and the school of logical positivism in general.

Mach is attributed with a number of principles that distill his ideal of physical theorisation — what is now called "Machian physics":

The last is singled out, particularly by Albert Einstein as "the" Mach's principle. Einstein cited it as one of the three principles underlying general relativity. In 1930, he stated that "it is justified to consider Mach as the precursor of the general theory of relativity",[20] though Mach, before his death, would reject Einstein's theory. Einstein was aware that his theories did not fulfill all Mach's principles, and no subsequent theory has either, despite considerable effort.

According to Alexander Riegler,[21] Ernst Mach's work was a precursor to the influential perspective known as constructivism. Constructivism holds that all knowledge is constructed rather than received by the learner. He took an exceptionally non-dualist, phenomenological position. The founder of radical constructivism, von Glasersfeld, gave a nod to Mach as an ally.[22]

Spinning chair devised by Mach to investigate the experience of motion

In 1873, independently of each other[23] Mach and the physiologist and physician Josef Breuer discovered how the sense of balance (i.e., the perception of the head’s imbalance) functions, tracing its management by information which the brain receives from the movement of a fluid in the semicircular canals of the inner ear. That the sense of balance depended on the three semicircular canals was discovered in 1870 by the physiologist Friedrich Goltz, but Goltz didn't discover how the balance-sensing apparatus functioned. Mach devised a swivel chair to enable him to test his theories, and Floyd Ratcliff has suggested that this experiment may have paved the way to Mach's critique of a physical conception of absolute space and motion. [24]

Exaggerated contrast between edges of the slightly differing shades of gray, appears as soon as they touch

In the area of sensory perception, psychologists remember Mach for the optical illusion called Mach bands. The effect exaggerates the contrast between edges of the slightly differing shades of gray, as soon as they contact one another, by triggering edge-detection in the human visual system.

More clearly than anyone before (or even since) Mach[25] made the distinction between what he called physiological (specifically visual) and geometrical spaces.

Mach's views on mediating structures inspired B. F. Skinner's strongly inductive position, which paralleled Mach's in the field of psychology.[26]

In homage his name was given to: