From Infogalactic: the planetary knowledge core
Jump to: navigation, search
This article is about the ancient Egyptian symbol. For the video game, see Eye of Horus (video game). 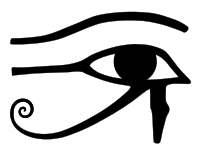 The Wedjat, later called The Eye of Horus

An Eye of Horus or Wedjat pendant

The Eye of Horus is an ancient Egyptian symbol of protection, royal power and good health. The eye is personified in the goddess Wadjet (also written as Wedjat,[1][2][3] or "Udjat",[4] Uadjet, Wedjoyet, Edjo or Uto[5]). It is also known as ''The Eye of Ra''.[6]

The name Wadjet is derived from "wadj" meaning "green", hence "the green one", and was known to the Greeks and Romans as "uraeus" from the Egyptian "iaret" meaning "risen one" from the image of a cobra rising up in protection.[7] Wadjet was one of the earliest of Egyptian deities who later became associated with other goddesses such as Bast, Sekhmet, Mut, and Hathor. She was the tutelary deity of Lower Egypt and the major Delta shrine the "per-nu" was under her protection.[7] Hathor is also depicted with this eye.[8]

Funerary amulets were often made in the shape of the Eye of Horus. The Wadjet or Eye of Horus is "the central element" of seven "gold, faience, carnelian and lapis lazuli" bracelets found on the mummy of Shoshenq II.[3] The Wedjat "was intended to protect the pharaoh [here] in the afterlife"[3] and to ward off evil. Ancient Egyptian and Middle-Eastern sailors would frequently paint the symbol on the bow of their vessel to ensure safe sea travel.[9]

Horus was the ancient Egyptian sky god who was usually depicted as a falcon, most likely a lanner or peregrine falcon.[10] His right eye was associated with the sun god, Ra. The eye symbol represents the marking around the eye of the falcon, including the "teardrop" marking sometimes found below the eye. The mirror image, or left eye, sometimes represented the moon and the god Djehuti (Thoth).[11]

In one myth, when Set and Horus were fighting for the throne after Osiris's death, Set gouged out Horus's left eye. The majority of the eye was restored by either Hathor or Thoth (with the last portion possibly being supplied magically). When Horus's eye was recovered, he offered it to his father, Osiris, in hopes of restoring his life. Hence, the eye of Horus was often used to symbolise sacrifice, healing, restoration, and protection.[12]

As hieroglyph and symbol

There are seven different hieroglyphs used to represent the eye, most commonly "ir.t" in Egyptian, which also has the meaning "to make or do" or "one who does".[5] In Egyptian myth the eye was not the passive organ of sight but more an agent of action, protection or wrath.

The Eye of Horus was represented as a hieroglyph, designated D10 in Gardiner's sign list.[13] It is represented in the Unicode character block for Egyptian hieroglyphs as U+13080 (𓂀).[14] 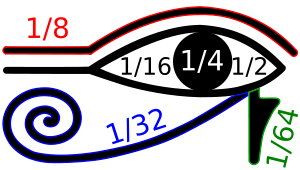 Arithmetic values represented by parts of the Eye of Horus 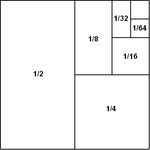 In Ancient Egyptian most fractions were written as the sum of two or more unit fractions (a fraction with 1 as the numerator), with scribes possessing tables of answers (see Rhind Mathematical Papyrus 2/n table).[15] Thus instead of ​3⁄4, one would write ​1⁄2 + ​1⁄4.

Different parts of the Eye of Horus were thought to be used by the ancient Egyptians to represent one divided by the first six powers of two:[16]

Studies from the 1970s to this day in Egyptian mathematics have clearly shown this theory was fallacious and Jim Ritter definitely showed it to be false in 2003.[18] The evolution of the symbols used in mathematics, although similar to the different parts of the Eye of Horus, is now known to be distinct.