Female factories were based on British bridewells, prisons and workhouses. They were for women convicts transported to the penal colonies of New South Wales and Van Diemen's Land.

An estimated 9,000 convict women were in the 13 female factories, in the colonies of NSW and Van Diemen's Land. This spanned a period of 52 years -1804 to 1856. An estimated 1 in 5 to 1 in 7 Australians are related to these women. The factories were called factories because each was a site of production. The women produced spun wool and flax in all the factories. In the main factories other work was undertaken such as sewing, stocking knitting and straw plaiting. Hard labour included rock breaking and oakum picking.[1] 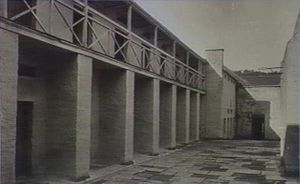