Van Diemen's Land was the original name used by most Europeans for the island of Tasmania, now part of Australia.

The Dutch explorer Abel Tasman was the first European to land on the shores of Tasmania in 1642. Landing at Blackman's Bay and later having the Dutch flag flown at North Bay, Tasman named the island Anthoonij van Diemenslandt, in honour of Anthony van Diemen, the Governor-General of the Dutch East Indies, who had sent Tasman on his voyage of discovery. Between 1772 and 1798 only the southeastern portion of the island was visited. Tasmania was not known to be an island until Matthew Flinders and George Bass circumnavigated it in the Norfolk in 1798–99.

Around 1784-85, Henri Peyroux de la Coudreniere, an army officer serving in Spanish Louisiana, wrote a “memoir on the advantages to be gained for the Spanish crown by the settlement of Van Dieman's Land”.[1] After receiving no response from the Spanish government, Peyroux proposed it to the French government, as "Mémoire sur les avantages qui résulteraient d’une colonie puissante à la terre de Diémen".[2]

In January 1793, a French expedition under the command of Antoine Raymond Joseph de Bruni d'Entrecasteaux anchored in Recherche Bay and a period of five weeks was spent in that area, carrying out explorations into both natural history and geography. In 1802 and 1803, the French expedition commanded by Nicolas Baudin explored D'Entrecasteaux Channel and Maria Island, and carried out charting of Bass Strait (Baudin had been associated, like Peyroux, with the resettlement of the Acadians from France to Louisiana). 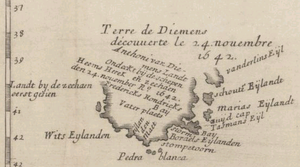 In August 1803 New South Wales Governor Philip King sent Lieutenant John Bowen to establish a small military outpost on the eastern shore of the Derwent River in order to forestall any claims to the island arising from the activities of the French explorers.

Major-General Ralph Darling was appointed Governor of New South Wales in 1825, and in the same year he visited Hobart Town, and on 3 December proclaimed the establishment of the independent colony, of which he actually became Governor for three days.[3]

The demonym for Van Diemen's Land was 'Van Diemonian', though contemporaries used the spelling Vandemonian. [4]

In 1856 the colony was granted responsible self-government with its own representative parliament, and the name of the island and colony was officially changed to Tasmania on 1 January 1856.[5][6]

Male convicts served their sentences as assigned labour to free settlers or in gangs assigned to public works. Only the most difficult convicts (mostly re-offenders) were sent to the Tasman Peninsula prison known as Port Arthur. Female convicts were assigned as servants in free settler households or sent to a female factory (women's workhouse prison). There were five female factories in Van Diemen's Land.

Convicts completing their sentences or earning their ticket-of-leave often promptly left Van Diemen's Land. Many settled in the new free colony of Victoria, to the dismay of the free settlers in towns such as Melbourne.

Complaints from Victorians about recently released convicts from Van Diemen's Land re-offending in Victoria was one of the contributing reasons for the eventual abolition of transportation to Van Diemen's Land in 1853.[7]

In 1856 Van Diemen's Land was renamed Tasmania. This removed the unsavoury criminal connotations with the name Van Diemen's Land, (and the "demon" connotation) while honouring Abel Tasman, the first European to find the island. The last penal settlement in Tasmania at Port Arthur closed in 1877.[9]