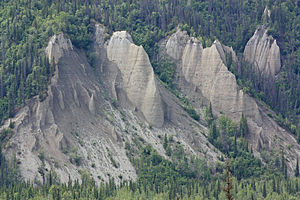 Fluvial is a term used in geography and geology to refer to the processes associated with rivers and streams and the deposits and landforms created by them. When the stream or rivers are associated with glaciers, ice sheets, or ice caps, the term glaciofluvial or fluvioglacial is used.[1][2]

Fluvial processes include the motion of sediment and erosion or deposition on the river bed.[3][4]

Erosion by moving water can happen in two ways. Firstly, the movement of water across the bed exerts a shear stress directly onto the bed. If the cohesive strength of the substrate is lower than the shear exerted, or the bed is composed of loose sediment which can be mobilized by such stresses, then the bed will be lowered purely by clearwater flow. However, if the river carries significant quantities of sediment, this material can act as tools to enhance wear of the bed (abrasion). At the same time the fragments themselves are ground down, becoming smaller and more rounded (attrition).

Sediment in rivers is transported as either bedload (the coarser fragments which move close to the bed) or suspended load (finer fragments carried in the water). There is also a component carried as dissolved material.

The amount of matter carried by a large river is enormous. The names of many rivers derive from the color that the transported matter gives the water. For example, the Huang He in China is literally translated "Yellow River", and the Mississippi River in the United States is also called "the Big Muddy." It has been estimated that the Mississippi River annually carries 406 million tons of sediment to the sea,[5] the Huang He 796 million tons, and the Po River in Italy 67 million tons.[6]