The DAP was founded in Munich in the hotel "Fürstenfelder Hof" on January 5, 1919 by Anton Drexler.[1] It developed out of the Freier Arbeiterausschuss für einen guten Frieden (Free Workers' Committee for a Good Peace) league, a branch of which Drexler had founded in 1918.[1] Thereafter in 1918, Karl Harrer (a journalist and member of the Thule Society), convinced Drexler and several others to form the Politischer Arbeiterzirkel (Political Workers' Circle).[1] The members met periodically for discussions with themes of nationalism and racism directed against the Jews.[1] Drexler was encouraged to form the DAP in December 1918 by his mentor, Dr. Paul Tafel. Tafel was a leader of the Alldeutscher Verband (Pan-Germanist Union), a director of the Maschinenfabrik Augsburg-Nürnberg, and a member of the Thule Society. Drexler's wish was for a political party which was both in touch with the masses and nationalist. In January 1919 with the DAP founding, Drexler was elected chairman and Harrer was made "Reich Chairman", an honorary title.[2] On May 17, only ten members were present at the meeting; a later meeting in August only noted 38 members attending.[3] 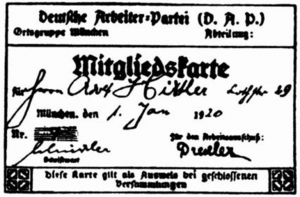 After World War I ended, Adolf Hitler returned to Munich. Having no formal education and career prospects, he tried to remain in the army for as long as possible.[4] In July 1919 he was appointed Verbindungsmann (intelligence agent) of an Aufklärungskommando (reconnaissance commando) of the Reichswehr, to influence other soldiers and to infiltrate the German Workers' Party (DAP). While monitoring the activities of the DAP, Hitler became attracted to founder Anton Drexler's anti-Semitic, nationalist, anti-capitalist, and anti-Marxist ideas.[1] While attending a party meeting at the Sterneckerbräu beer hall on September 12, 1919, Hitler became involved in a heated political argument with a visitor, a Professor Baumann, who questioned the soundness of Gottfried Feder's arguments against capitalism and proposed that Bavaria should break away from Prussia and found a new South German nation with Austria. In vehemently attacking the man's arguments he made an impression on the other party members with his oratory skills and, according to Hitler, the "professor" left the hall acknowledging unequivocal defeat.[5] Impressed with Hitler, Drexler invited him to join the DAP. Hitler accepted on September 12, 1919,[6] becoming the party's 55th member.[7]

In less than a week, Hitler received a postcard from Drexler stating he had officially been accepted as a DAP member and he should come to a "committee" meeting to discuss it. Hitler attended the "committee" meeting held at the run-down Altes Rosenbad beer-house.[8] Normally, enlisted army personnel were not allowed to join political parties. However in this case, Hitler had Captain Karl Mayr's permission to join the DAP. Further, Hitler was allowed to stay in the army and receive his weekly pay of 20 gold marks a week.[9] At the time when Hitler joined the party there were no membership numbers or cards. It was in January 1920 when a numeration was issued for the first time: listed in alphabetical order, Hitler received the number 555. In reality he had been the 55th member, but the counting started at the number 501 in order to make the party appear larger. Hitler, in his work Mein Kampf, later claimed to be the seventh party member (he was in fact the seventh executive member of the Party's central committee).[10] After giving his first speech for the DAP on October 16 at the Hofbräukeller, Hitler quickly became the party's most active orator. Hitler's considerable oratory and propaganda skills were appreciated by the party leadership as crowds began to "flock" to hear his speeches during 1919 and 1920. With the support of Anton Drexler, Hitler became chief of propaganda for the party in early 1920. Hitler preferred that role as he saw himself as the drummer for a national cause. He saw propaganda as the way to bring nationalism to the public.[11]

From DAP to NSDAP

The small number of party members were quickly won over to Hitler's political beliefs. He organized their biggest meeting yet of 2,000 people, for February 24, 1920 in the Staatliches Hofbräuhaus in München. Further in an attempt to make the party more broadly appealing to larger segments of the population, the DAP was renamed the National Socialist German Workers' Party on February 24.[12] Such was the significance of Hitler's particular move in publicity that Karl Harrer resigned from the party in disagreement.[13] The new name was borrowed from a different Austrian party active at the time (Deutsche Nationalsozialistische Arbeiterpartei, German National Socialist Workers' Party), although Hitler earlier suggested the party to be renamed the "Social Revolutionary Party"; it was Rudolf Jung who persuaded Hitler to follow the NSDAP naming.[14]