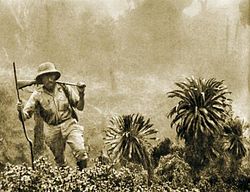 Exploration is the act of searching for the purpose of discovery of information or resources. Exploration occurs in all non-sessile animal species, including humans. In human history, its most dramatic rise was during the Age of Discovery when European explorers sailed and charted much of the rest of the world for a variety of reasons. Since then, major explorations after the Age of Discovery have occurred for reasons mostly aimed at information discovery.

In scientific research, exploration is one of three purposes of empirical research (the other two being description and explanation). The term is commonly used metaphorically. For example, an individual may speak of exploring the Internet, sexuality, etc.

The Phoenicians (1550 BC–300 BC) traded throughout the Mediterranean Sea and Asia Minor though many of their routes are still unknown today. The presence of tin in some Phoenician artifacts suggests that they may have traveled to Britain. Some scientists speculate that they voyaged all the way to Central America, although this is disputed. According to Virgil's Aeneid and other ancient sources, the legendary Queen Dido was a Phoenician from Asia Minor who sailed to North Africa and founded the city of Carthage.

Hanno the Navigator (500 BC), a Carthaginean navigator explored the Western Coast of Africa.

The Greek explorer from Marseille, Pytheas (380 – c. 310 BC) was the first to circumnavigate Great Britain, explore Germany, and reach Thule (most commonly thought to be the Shetland Islands or Iceland).

During the 2nd century BC, the Han dynasty explored much of the Eastern Northern Hemisphere. Starting in 139 BC, the Han diplomat Zhang Qian traveled west in an unsuccessful attempt to secure an alliance with the Da Yuezhi against the Xiongnu (the Yuezhi had been evicted from Gansu by the Xiongnu in 177 BC); however, Zhang's travels discovered entire countries which the Chinese were unaware of, including the remnants of the conquests of Alexander the Great (r. 336–323 BC).[1] When Zhang returned to China in 125 BC, he reported on his visits to Dayuan (Fergana), Kangju (Sogdiana), and Daxia (Bactria, formerly the Greco-Bactrian Kingdom which had just been subjugated by the Da Yuezhi).[2] Zhang described Dayuan and Daxia as agricultural and urban countries like China, and although he did not venture there, described Shendu (the Indus River valley of Northwestern India) and Anxi (Arsacid territories) further west.[3] 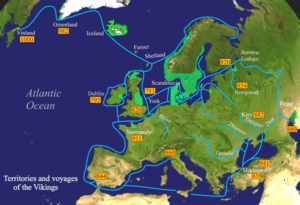 From about 800 Ad to 1040 AD, the Vikings explored Europe and much of the Western Northern Hemisphere via rivers and oceans. For example, it is known that the Norwegian Viking explorer, Erik the Red (950–1003), sailed to and settled in Greenland after being expelled from Iceland, while the Icelandic explorer Leif Ericson (980–1020) is believed to be the first European to land in North America. 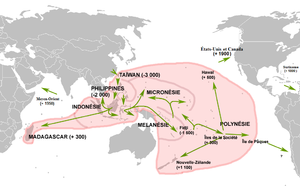 Polynesians were a maritime people, who populated and explored the central and south Pacific for around 5,000 years, up to about 1280 when they discovered New Zealand. The key invention to their exploration was the outrigger canoe, which provided a swift and stable platform for carrying goods and people. Based on limited evidence, it is thought that the voyage to New Zealand was deliberate. It is unknown if one or more boats went to New Zealand, or the type of boat, or the names of those who migrated. 2011 studies at Wairau Bar in New Zealand show a high probability that one origin was Ruahine Island in the Society Islands. Polynesians may have used the prevailing north easterly trade winds to reach New Zealand in about three weeks. The Cook Islands are in direct line along the migration path and may have been an intermediate stopping point. There are cultural and language similarities between Cook Islanders and New Zealand Maori. Early Maori had different legends of their origins, but the stories were misunderstood and reinterpreted in confused written accounts by early European historians in New Zealand trying to present a coherent pattern of Maori settlement in New Zealand.

Mathematical modelling based on DNA genome studies, using state-of-the-art techniques, have shown that a large number of Polynesian migrants (100-200), including women, arrived in New Zealand around the same time, in about 1280. Otago University studies have tried to link distinctive DNA teeth patterns, which show special dietary influence, with places in or nearby the Society Islands.[4]

Chinese exploration of the Indian Ocean

The Chinese explorer, Wang Dayuan (fl. 1311–1350) made two major trips by ship to the Indian Ocean. During 1328–1333, he sailed along the South China Sea and visited many places in Southeast Asia and reached as far as South Asia, landing in Sri Lanka and India. Then in 1334–1339, he visited North Africa and East Africa. Later, the Chinese admiral Zheng He (1371–1433) made seven voyages to Arabia, East Africa, India, Indonesia and Thailand.

The Age of Discovery, also known as the Age of Exploration, is one of the most important periods of geographical exploration in human history. It started in the early 15th century and lasted until the 17th century. In that period, Europeans discovered and/or explored vast areas of the Americas, Africa, Asia and Oceania.

The most important explorers of this period include: Diogo Cão (c.1452 –c.1486) who discovered and ascended the Congo River and reached the coasts of the present-day Angola and Namibia; Bartolomeu Dias (c. 1450–1500), who was the first European to reach the Cape of Good Hope and other parts of the South African coast; Christopher Columbus (1451–1506), who led a Castilian (Spanish) expedition across the Atlantic, discovering America; Vasco da Gama (1460–1524), a navigator who made the first trip from Europe to India and back by the Cape of Good Hope, discovering the ocean route to the East; Pedro Alvares Cabral (c. 1467/68–c.1520) who, following the path of Gama, claimed Brazil and led the first expedition that linked Europe, Africa, America, and Asia; Diogo Dias, who discovered the eastern coast of Madagascar and rounded the corner of Africa; explorers such as Diogo Fernandes Pereira and Pedro Mascarenhas (1470–1555), among others, who discovered and mapped the Mascarene Islands and other archipelagos; António de Abreu (c.1480–c.1514) and Francisco Serrão (14?–1521), who led the first direct European fleet into the Pacific ocean (on its western edges), through the Sunda Islands, reaching the Moluccas; Juan Ponce de León (1474–1521), who discovered and mapped the coast of Florida; Vasco Núñez de Balboa (c. 1475–1519), who was the first European to view the Pacific ocean from American shores (after crossing the Isthmus of Panama) confirming that America was a separate continent from Asia; Ferdinand Magellan (1480–1521), who was the first navigator to cross the Pacific Ocean, discovering the Strait of Magellan, the Tuamotus and Mariana Islands, achieving a nearly complete circumnavigation of the Earth, in multiple voyages, for the first time; Juan Sebastian Elcano (1476–1526), who completed the first global circumnavigation; Aleixo Garcia (14?–1527), who explored the territories of present-day southern Brazil, Paraguay and Bolivia, crossing the Chaco and reaching the Andes (near Sucre); Jorge de Menezes (c. 1498–?), who discovered Papua New Guinea; García Jofre de Loaísa (1490–1526), who discovered the Marshall Islands; Álvar Núñez Cabeza de Vaca (1490–1558), who discovered the Mississippi River and was the first European to sail the Gulf of Mexico and cross Texas; Jacques Cartier (1491–1557), who drew the first maps of part of central and maritime Canada; Andres de Urdaneta (1498–1568), who discovered the maritime route from Asia to the Americas; Francisco Vázquez de Coronado (1510–1554), who discovered the Grand Canyon and the Colorado River; Francisco de Orellana (1511–1546), who was the first European to navigate the length of the Amazon River. 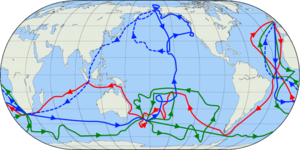 The routes of Captain James Cook's voyages. The first voyage is shown in red, second voyage in green, and third voyage in blue.

Long after the golden age of discovery, other explorers completed the world map, such as various Russians explorers, reaching the Siberian Pacific coast and the Bering Strait, at the extreme edge of Asia and Alaska (North America); Vitus Bering (1681–1741) who in the service of the Russian Navy, explored the Bering Strait, the Bering Sea, the North American coast of Alaska, and some other northern areas of the Pacific Ocean; and James Cook, who explored the east coast of Australia, the Hawaiian Islands, and circumnavigated the Antarctic continent.

Humanity is continuing to follow the impulse to explore, moving beyond Earth. Space exploration started in the 20th century with the invention of exo-atmospheric rockets. This has given humans the opportunity to travel to the Moon, and to send robotic explorers to other planets and far beyond.

Both of the Voyager probes have left the Solar System, bearing imprinted gold discs with multiple data types.

A recent scientific study, performed on mobile phone data of an entire European country and on GPS tracks of private vehicles in Italy, demonstrated that even today individuals naturally split into two well-defined categories according to their mobility habits: returners and explorers[5]. According to this research published on Nature Communications[5], today's explorers have a tendency to wander between a large number of different locations showing a star-like mobility pattern: they have a central core of locations (composed by home and work places) around which distant core of locations gravitates[5][6]. Interestingly, two features characterize today's explorers: 1) they are more likely to spread infectious diseases when traveling, due to their mobility patterns; 2) they tend to communicate preferably with other explorers, i.e. they show a communication homophily with people in the same mobility category[5].

Terrains and places explored by humans 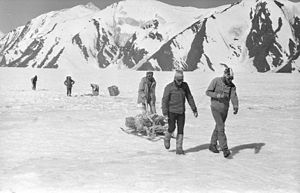 Humans have developed specialized tools and strategies to explore specific areas of the Earth, including the arctic, caves, deserts, oceans, and urban environments; and even Earth's moon. With robotic machines, humans have also explored many parts of the heliosphere, and through measurements, beyond the Solar System and beyond the Milky Way as part of an ongoing global Space exploration initiative.