A global city, also called world city or sometimes alpha city or world center, is a city generally considered to be an important node in the global economic system. The concept comes from geography and urban studies, and the idea that globalization can be understood as largely created, facilitated, and enacted in strategic geographic locales according to a hierarchy of importance to the operation of the global system of finance and trade.

The most complex of these entities is the "global city", whereby the linkages binding a city have a direct and tangible effect on global affairs through socio-economic means.[1] The use of "global city", as opposed to "megacity", was popularized by sociologist Saskia Sassen in her 1991 work, The Global City: New York, London, Tokyo;[2] although the term "world city", which refers to cities involved with large amounts of global business, dates to at least the May 1886 description of Liverpool, by The Illustrated London News.[3] Patrick Geddes also used the term "world city" later in 1915.[4] More recently, the term has been described as being synonymous with a city's influence and 'financial capital', with other factors becoming less relevant.[5][6]

Cities can also fall from such categorization, as in the case of cities that have become less cosmopolitan and less internationally renowned in the current era.

Although what constitutes a world city is still subject to debate, standard characteristics of world cities are:[8]

In 2015, the second Global Economic Power Index, a "survey of the surveys" compiled by Richard Florida, was published by The Atlantic (to be differentiated from a namesake list[11] published by the Martin Prosperity Institute), with cities ranked according to criteria reflecting their presence on 5 separate lists as published by 5 different entities.[11][12]

The Institute for Urban Strategies at The Mori Memorial Foundation in Tokyo issued a comprehensive study of global cities in 2016. The ranking is based on six overall categories, "Economy", "Research & Development", "Cultural Interaction", "Livability", "Environment", and "Accessibility", with 70 individual indicators among them. This Japanese ranking also breaks down top ten world cities ranked in subjective categories such as "manager, researcher, artist, visitor and resident".[13] 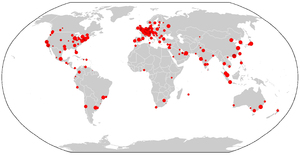 Together, Jon Beaverstock, Richard G. Smith and Peter J. Taylor established the Globalization and World Cities Research Network (GaWC). A roster of world cities was outlined in the GaWC Research Bulletin 5 and ranked cities based on their connectivity through four "advanced producer services": accountancy, advertising, banking/finance, and law.[7] The GaWC inventory identifies three levels of global cities and several sub-ranks.[14]

In 2008, the American journal Foreign Policy, in conjunction with the Chicago-based consulting firm A.T. Kearney and the Chicago Council on Global Affairs, published a ranking of global cities, based on consultation with Saskia Sassen, Witold Rybczynski, and others.[15] Foreign Policy noted that "the world’s biggest, most interconnected cities help set global agendas, weather transnational dangers, and serve as the hubs of global integration. They are the engines of growth for their countries and the gateways to the resources of their regions."[16] The ranking is based on 27 metrics across five dimensions: business activity, human capital, information exchange, cultural experience, and political engagement and was updated in 2010, 2012, 2014, 2015 and 2016. Since 2015 it is published together with the Global Cities Outlook, a projection of a city’s potential based on rate of change in 13 indicators across four dimensions: personal well-being, economics, innovation, and governance.[17]

"The Wealth Report" (a global perspective on prime property and wealth) is made by the London-based estate agent Knight Frank LLP together with the Citi Private Bank. The report includes a "Global Cities Survey", evaluating which cities are considered the most important to the world’s HNWIs (high-net-worth individuals, having over $25 million of investable assets). For the Global Cities Survey, Citi Private Bank’s wealth advisors, and Knight Frank’s luxury property specialists were asked to name the cities that they felt were the most important to HNWIs, in regard to: "economic activity", "political power", "knowledge and influence" and "quality of life".[18][19]

In 2012, the Economist Intelligence Unit (The Economist Group), ranked the competitiveness of global cities according to their demonstrated ability to attract capital, businesses, talent and visitors.[20]