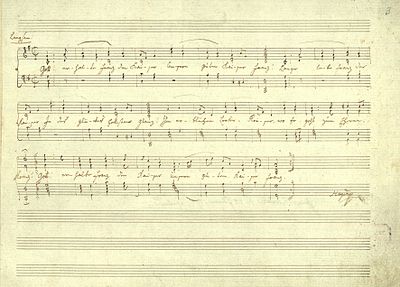 Autograph score of the original version

Gott erhalte Franz den Kaiser (English: God Save Emperor Francis) is an anthem to Francis II, Emperor of the Holy Roman Empire and later of Austria. The lyrics were by Lorenz Leopold Haschka (1749–1827), and the melody by Joseph Haydn. It is sometimes called the "Kaiserhymne" (Emperor's Hymn). Haydn's tune has since been widely employed in other contexts: in works of classical music, in Christian hymns, in alma maters, and as the tune of the Deutschlandlied, the national anthem of Germany.

The sound file given below (played on a piano) uses the harmony Haydn employed for the string quartet version of his song, which he prepared later in 1797.

The English translation of the above verse is:

The song was written when Austria was seriously threatened by France and patriotic sentiments ran high. The story of the song's genesis was narrated in 1847 by Anton Schmid, who was Custodian of the Austrian National Library in Vienna:[1]

In England, Haydn came to know the favourite British national anthem, 'God Save the King', and he envied the British nation for a song through which it could, at festive occasions, show in full measure its respect, love, and devotion to its ruler.

When the Father of Harmony returned to his beloved Kaiserstadt,[2] he related these impressions to that real friend, connoisseur, supporter and encourager of many a great and good one of Art and Science, Freiherr van Swieten, Prefect of the I. R. Court Library, who at the time was at the head of the Concert Spirituel (supported by high aristocracy) and likewise Haydn's particular patron.[3] Haydn wished that Austria, too, could have a similar national anthem, wherein it could display a similar respect and love for its Sovereign. Also, such a song could be used in the fight then taking place with those forcing the Rhine; it could be used in a noble way to inflame the heart of the Austrians to new heights of devotion to the princes and fatherland, and to incite to combat, and to increase, the mob of volunteer soldiers who had been collected by a general proclamation.

Freiherr van Swieten hastily took counsel with His Excellency, the then President of Lower Austria Franz Count von Saurau ... and so there came into being a song which, apart from being one of Haydn's greatest creations, has won the crown of immortality.

It is also true that this high-principled Count used the most opportune moment to introduce a Volksgesang,[4] and thus he called to life those beautiful thoughts which will delight connoisseurs and amateurs here and abroad.

He immediately ordered the poet Lorenz Haschka to draft the poetry and then requested our Haydn to set it to music.

In January 1797, this double task was resolved, and the first performance of the Song was ordered for the birthday of the Monarch.

I had a text fashioned by the worthy poet Haschka; and to have it set to music, I turned to our immortal compatriot Haydn, who, I felt, was the only man capable of creating something that could be placed at the side of ... "God Save the King".[citation needed]

As elsewhere in Haydn's music, it has been conjectured that Haydn took part of his material from folksongs he knew. This hypothesis has never achieved unanimous agreement, the alternative being that Haydn's original tune was adapted by the people in various versions as folk songs. For discussion, see Haydn and folk music.

One claimed folk source of "Gott erhalte" is a Croatian song, known in Međimurje and northern regions of Croatia under the name "Stal se jesem". The version below was collected by a field worker in the Croatian-speaking Austrian village of Schandorf.

Irrespective of the original source, Haydn's own compositional efforts went through multiple drafts, discussed by Rosemary Hughes in her biography of the composer.[5] Hughes reproduces the draft fragment given below (i.e., the fifth through eighth lines of the song) and writes, "His sketches, preserved in the Vienna National Library,[6] show the self-denial and economy with which he struggled to achieve [the song's] seemingly inevitable climax, pruning the earlier and more obviously interesting version of the fifth and sixth lines, which would have anticipated, and so lessened, its overwhelming effect."

The original version of the song (see autograph score, above) included a single line for voice with a rather crude piano accompaniment, with no dynamic indications and what Jones calls "an unevenness of keyboard sonority."[7] This version was printed in many copies (two different printers were assigned to the work) and sent to theaters and opera houses across the Austrian territories with instructions for performance.[7] The Vienna premiere took place in the Burgtheater on 12 February 1797, the day the song was officially released. The Emperor was present, attending a performance of Dittersdorf's opera Doktor und Apotheker and Joseph Weigl's ballet Alonzo und Cora. The occasion celebrated his 29th birthday.[7] 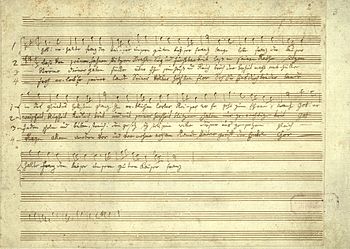 Not long after, Haydn later wrote three additional versions of his song:

Haydn's own view of the song

Joseph Haydn seems to have been particularly fond of his creation. During his frail and sickly old age (1802–1809), the composer often would struggle to the piano to play his song, often with great feeling, as a form of consolation; and as his servant Johann Elssler narrated, it was the last music Haydn ever played:

The Kayser Lied was still played three times a day, though, but on May 26th [1809] at half-past midday the Song was played for the last time and that 3 times over, with such expression and taste, well! that our good Papa was astonished about it himself and said he hadn't played the Song like that for a long time and was very pleased about it and felt well altogether till evening at 5 o'clock then our good Papa began to lament that he didn't feel well...[10]

Elssler goes on to narrate the composer's final decline and death, which occurred on May 31.

Later uses of the tune in classical music

Later composers in the Western classical canon have repeatedly quoted or otherwise employed Haydn's tune, as is demonstrated by the following chronological list.

Use in national anthems, alma maters, and hymns

After the death of Francis in 1835, the tune was given new lyrics that praised his successor, Ferdinand: "Segen Öst'reichs hohem Sohne / Unserm Kaiser Ferdinand!" ("Blessings to Austria's high son / Our Emperor Ferdinand!"). After Ferdinand's abdication in 1848, the original lyrics were used again because his successor (Francis Joseph) was also named Francis. However, in 1854, yet again new lyrics were selected: "Gott erhalte, Gott beschütze / Unsern Kaiser, unser Land!" ("God preserve, God protect / Our Emperor, our country!").

There were versions of the hymn in several languages of the Austro-Hungarian Empire (e.g., Czech, Croatian, Slovene, Hungarian, Polish, Italian).

At the end of the First World War in 1918, the Austro-Hungarian Empire was abolished and divided into multiple states, one of them being the residual state of Austria, which was a republic and had no emperor. The tune ceased to be used for official purposes. When the last Emperor, Charles I, died in 1922, monarchists created an original stanza for his son Otto von Habsburg. Since the emperor was in fact never restored, this version never attained official standing.

The hymn was revived in 1929 with completely new lyrics, known as Sei gesegnet ohne Ende, which remained the national anthem of Austria until the Anschluss. The first stanza of the hymn's 1854 version was sung in 1989 during the funeral of Empress Zita of Austria[11] and again in 2011 during the funeral of her son Otto von Habsburg[12] as a tribute to the family.

Long after Haydn's death, his melody was used as the tune of Hoffmann von Fallersleben's Das Lied der Deutschen (1841). The third stanza of the poem ("Einigkeit und Recht und Freiheit"), sung to the melody, is currently the national anthem of Germany.

In the ordinary nomenclature of hymn tunes, the melody of "Gott erhalte Franz den Kaiser" is classified as 87.87D trochaic metre. When employed in a hymn it is sometimes known as Austria. It has been paired with various lyrics.

Various American schools, colleges, and universities use Haydn's music as the tune for their university or school hymns. Here is a partial list.

During Haydn's lifetime, his friend the musicologist Charles Burney, made an English translation of the first verse which is more felicitous if less literal than the one given above:

Burney's penultimate couplet about sheep has no counterpart in the original German and appears to be Burney's own contribution.

For translations into several of the languages that were spoken in the Austrian Empire, see Translations of Gott erhalte Franz den Kaiser.

After the last Emperor, Charles I, died in 1922, monarchists created an original stanza for his son Otto von Habsburg. Since Austria had deposed its emperor in 1918 and become a republic, this version never had official standing.