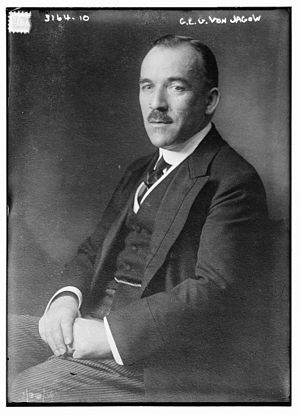 Jagow was educated at the University of Bonn.[1] He entered the diplomatic service in 1895, and was first assigned to the German embassy in Rome, then to the Prussian mission at Munich. After he passed his examination in diplomacy in 1897, he was assigned to the Prussian mission at Hamburg, but quickly switched again to Rome, where he advanced to the position of Second Secretary (legation counselor). After a short interlude with the German mission at The Hague, he returned as First Secretary to the embassy in Rome in March 1901, where he stayed until 1906, when he was transferred to the Foreign Office in Berlin. He first made his mark as private secretary to Bernhard von Bülow, former Imperial Chancellor. In December 1907 he was appointed Envoy Extraordinary to Luxemburg, in May 1909 he became German ambassador at Rome. During the Turco-Italian War, he conducted important negotiations with the Italian government and, it is said, prevented a war between Austria and Italy at the time.[1]

In 1913, he was appointed foreign minister of Germany. He played an active part in the negotiations preceding the outbreak of World War I, and was, in particular, concerned in the German relations with Austria, having been the first member of the Imperial Government in Berlin to become acquainted with the terms of the Austrian ultimatum to Serbia.[2]

In the July Crisis of 1914, Jagow was confident that an Austro-Serbian war would be localized, and that Russia was not yet prepared for a continental war. This belief was incorrect, which indirectly led to the outbreak of World War I. After the war, Jagow attributed deeper reasons for the outbreak of war to "this damned system of alliances."[citation needed]

According to Friedrich Katz, Jagow was the principal supporter of a failed plan designed to involve the United States and Mexico in a war. At the time, the Mexican Revolution had created rising tensions between both countries. As a result, Jagow expected that the United States would not enter World War I if it was militarily involved with Mexico.[citation needed]

Jagow retired in November 1916. A quiet, retiring and scholarly man, he was one of the worst speakers in the Reichstag. James W. Gerard, at the time United States ambassador to Germany, in his book My Four Years in Germany said Jagow was forced out of office by an agitation against him on account of his lack of force in defending government policy in the Reichstag.[1]