Walther Rathenau (29 September 1867 – 24 June 1922) was a German industrialist, politician, writer, and statesman who served as Foreign Minister of Germany during the Weimar Republic. Rathenau's most notable act as Foreign Minister was the Treaty of Rapallo. He was assassinated on 24 June 1922 by the right-wing terrorist Organization Consul group.

Rathenau was born in Berlin. His parents were Emil Rathenau and Mathilde Nachmann.[1] His father, Emil Rathenau was a prominent Jewish businessman and founder of the Allgemeine Elektrizitäts-Gesellschaft (AEG), an electrical engineering company.

He studied physics, chemistry, and philosophy in Berlin and Strasbourg, and received a doctorate in physics in 1889 after studying under August Kundt.[2] His German Jewish heritage and his wealth[3] were both factors in establishing his deeply divisive reputation in German politics at a time of antisemitism. He worked as an engineer before he joined the AEG board in 1899, becoming a leading industrialist in the late German Empire and early Weimar Republic periods.[4] Rathenau is generally acknowledged to be, in part, the basis for the German Count and industrialist Paul Arnheim, a character in Robert Musil's novel The Man Without Qualities.[5]

Rathenau never married. He had no children. 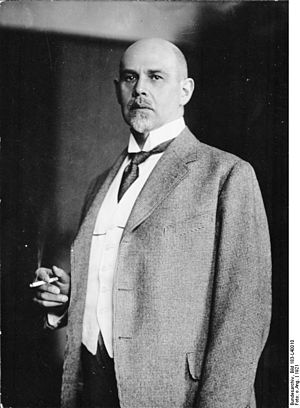 During World War I, Rathenau held senior posts in the Raw Materials Department of the War Ministry and became chairman of AEG upon his father's death in 1915. Rathenau played the key role in convincing the War Ministry to set up the War Raw Materials Department (Kriegsrohstoffabteilung - 'KRA'), which he was in charge of from August 1914 to March 1915 establishing the fundamental policies and procedures. His senior staff were on loan from industry. KRA focused on raw materials threatened by the British blockade, as well as supplies from occupied Belgium and France. It set prices and regulated the distribution to vital war industries. It began the development of ersatz raw materials. KRA suffered many inefficiencies caused by the complexity and selfishness KRA encountered from commerce, industry, and the government itself.[6]

Rathenau was a moderate liberal in politics, and after World War I, he was one of the founders of the German Democratic Party (DDP). He rejected the state ownership of industry and advocated greater worker participation in the management of companies. His ideas were influential in postwar governments.

In 1921, Rathenau was appointed Minister of Reconstruction, and, in 1922 he became Foreign Minister. His insistence that Germany should fulfill its obligations under the Treaty of Versailles but work for a revision of its terms infuriated extreme German nationalists. He also angered such extremists by negotiating in 1922 the Treaty of Rapallo with the Soviet Union although the treaty implicitly recognized secret German-Soviet collaboration, begun in 1921, which provided for the rearmament of Germany, including German aircraft manufacturing in Russian territory.[7] The leaders of the (still obscure) National Socialist German Workers' Party and other extreme groups[citation needed] falsely claimed he was part of a "Jewish-Communist conspiracy" despite the fact that he was a liberal German nationalist who had bolstered the country's recent war effort.

The British politician Robert Boothby wrote of him, "He was something that only a German Jew could simultaneously be: a prophet, a philosopher, a mystic, a writer, a statesman, an industrial magnate of the highest and greatest order, and the pioneer of what has become known as 'industrial rationalization'."

Despite his desire for economic and political co-operation between Germany and the Soviet Union, Rathenau remained skeptical of the methods of the Soviets:[8]

We cannot use Russia's methods, as they only and at best prove that the economy of an agrarian nation can be leveled to the ground; Russia's thoughts are not our thoughts. They are, as it is in the spirit of the Russian city intelligentsia, unphilosophical, and highly dialectic; they are passionate logic based on unverified suppositions. They assume that a single good, the destruction of the capitalist class, weighs more than all other goods, and that poverty, dictatorship, terror and the fall of civilization must be accepted to secure this one good. Ten million people must die to free ten million people from the bourgeoisie is regarded as a harsh but necessary consequence. The Russian idea is compulsory happiness, in the same sense and with the same logic as the compulsory introduction of Christianity and the Inquisition.

On 24 June 1922, two months after the signing of the Treaty of Rapallo which renounced German territorial claims from World War I, Rathenau was assassinated. On this Saturday morning, Rathenau had himself chauffeured from his house in Berlin-Grunewald to the Foreign Office in Wilhelmstraße. During the trip his NAG-Convertible was passed by a Mercedes-Touring car with Ernst Werner Techow behind the wheel and Erwin Kern and Hermann Fischer on the backseats. Kern opened fire with a MP 18-submachine gun at close range, killing Rathenau almost instantly, while Fischer threw a hand grenade into the car before Techow quickly drove them away.[9] Also involved in the plot were Techow's younger brother Hans Gerd Techow, future writer Ernst von Salomon, and Willi Günther (aided and abetted by seven others, some of them schoolboys). All conspirators were members of the ultra-nationalist secret Organisation Consul (O.C.).[10] A memorial stone in the Königsallee in Grunewald marks the scene of the crime. 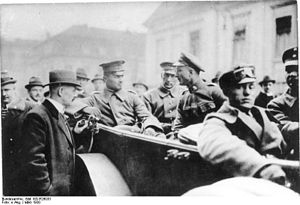 Hermann Ehrhardt (left, sitting in the car) during the Kapp-Putsch in Berlin, 1920.

Rathenau's assassination was but one in a row of terrorist attacks by the O.C.. Most notable among them had been the assassination of former finance minister Matthias Erzberger in August 1921. While Fischer and Kern prepared their plot, former chancellor Philipp Scheidemann barely survived an attempt on his life by O. C. assassins on 4 June 1922.[11] Historian Martin Sabrow points to Hermann Ehrhardt, the undisputed leader of the O.C., as the one who ordered the murders. Ehrhardt and his men believed that Rathenau's death would bring down the government and prompt the Left to act against the Weimar Republic, thereby provoking civil war, in which the O.C. would be called on for help by the Reichswehr. After an anticipated victory Ehrhardt hoped to establish an authoritarian regime or a military dictatorship. In order not to be completely delegitimized by the murder of Rathenau, Ehrhardt carefully saw to it that no connections between him and the assassins could be detected. Thus although Fischer and Kern connected with the Berlin chapter of the O.C. to use its resources, they mainly acted on their own in planning and carrying out the assassination.[12] 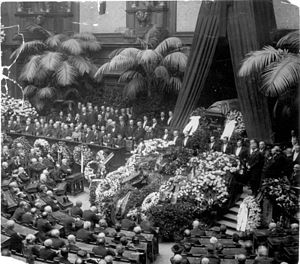 State memorial ceremony with Rathenau's laid out coffin in the Reichstag, 27 June 1922.

The terrorists' aims were however not achieved and civil war did not come. Instead millions of Germans gathered on the streets to express their grief and to demonstrate against counter-revolutionary terrorism.[13] When the news of Rathenau's death became known in the Reichstag, the session turned into turmoil. DNVP-politician Karl Helfferich in particular became the target of attacks, because he had just recently uttered a vitriolic attack upon Rathenau.[13] During the official memorial ceremony the next day Chancellor Joseph Wirth from the Centre Party held a soon to be famous speech, in which, while pointing to the right side of the parliamentary floor, he used a well known formula by Philipp Scheidemann: "There is the enemy - and there is no doubt about it: This enemy is on the right!"[14]

The crime itself was soon cleared up. Willi Günther had bragged about his participation in public. After his arrest on 26 June he confessed to the crime without holding anything back. Hans Gerd Techow was arrested the following day, Ernst Werner Techow, who was visiting his uncle, three days later. Fischer and Kern, however, remained on the loose. After a daring flight, which kept Germany in suspense for more than two weeks, they were finally spotted at the castle of Saaleck in Thuringia, whose owner was himself a secret member of the O.C.. On 17 July, they were confronted by two police detectives. While waiting for reinforcements during the stand-off one of the detectives fired at a window, unknowingly killing Kern by a bullet in the head. Fischer then took his own life.[15] 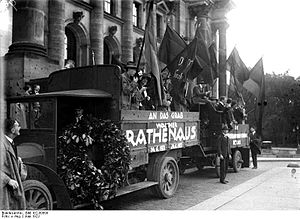 So when in October 1922 the crime was brought to court, Ernst Werner Techow was the only defendant charged with murder. Twelve more defendants were arraigned on various charges, among them Hans Gerd Techow and Ernst von Salomon, who had spied out Rathenau's habits and kept up contact with the O.C., as well as the commander of the O.C. in Western Germany, Karl Tillessen, a brother of Erzberger's assassin Heinrich Tillessen, and his adjutant Hartmut Plaas. The prosecution left aside the political implications of the plot, but focused upon the issue of antisemitism.[16] Ahead of his assassination Rathenau had indeed been the frequent target of vicious antisemitic attacks, and the assassins had also been members of the violently antisemitic Deutschvölkischer Schutz- und Trutzbund. Kern had, according to Ernst Werner Techow, argued that Rathenau had to be murdered, because he had intimate relations with Bolshevik Russia, so that he had even married off his sister with the Communist Karl Radek and that Rathenau himself had confessed to be one of the three hundred "Elders of Zion" as described in the notorious antisemitic forgery The Protocols of the Elders of Zion.[17] But the defendants vigorously denied that they had killed Rathenau because he was Jewish.[18] Neither was the prosecution able to fully uncover the involvement of the O.C. in the plot. Thus Tillessen and Plaas were only convicted of non-notification of a crime and sentenced to three and two years in prison, respectively. Salomon received five years imprisonment for accessory to murder. Ernst Werner Techow narrowly escaped the death penalty, because in a last-minute confession he managed to convince the court that he had only acted under the threat of death by Kern. Instead he was sentenced to fifteen years in prison for accessory to murder.[16] 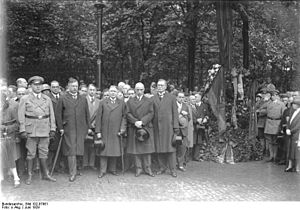 Unveiling of the first Commemorative Plaque at the scene of the crime in June 1929. Former chancellor Joseph Wirth and Defence Minister Wilhelm Groener in the first row

Initially, the reactions upon Rathenau's assassination strengthened the Weimar Republic. The most notable reaction was the enactment of the de (Republikschutzgesetz) (Law for the Defense of the Republic) taking effect on 22 July 1922. The Deutschlandlied was made the German national anthem. As long as the Weimar Republic existed, the date 24 June remained a day of public commemorations. In public memory Rathenau's death increasingly appeared to be a martyr-like sacrifice for democracy.[19]

Things changed with the Nazi seizure of power. The Nazis systematically wiped out public commemoration of Rathenau by destroying monuments to him, closing the Walther-Rathenau-Museum in his former mansion, and renaming streets and schools dedicated to him. Instead a memorial plate to Kern and Fischer was solemnly unveiled at Saaleck Castle in July 1933 and in October 1933 a monument was erected on the assassins' grave.[20]